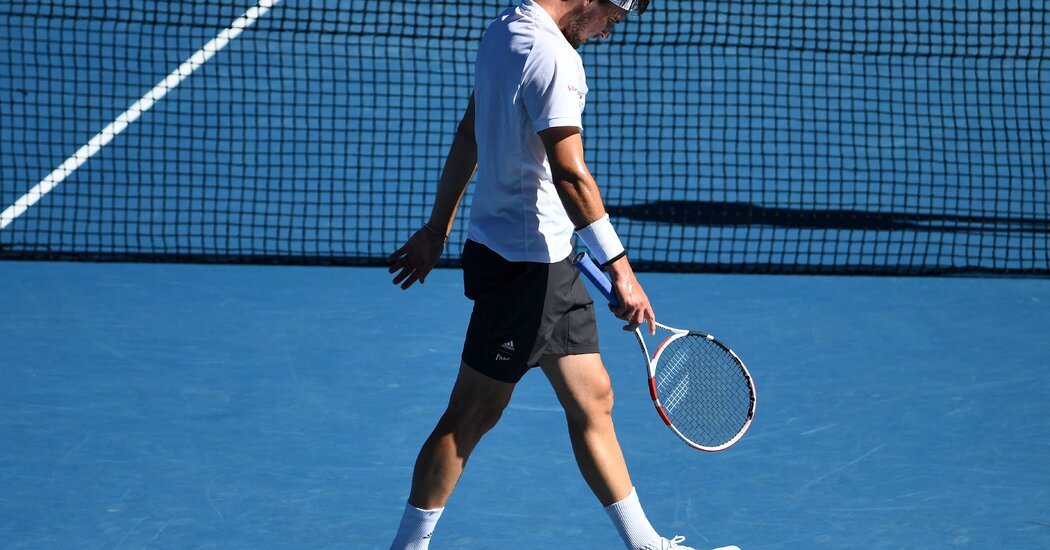 The spectators will be back for the 2021 U.S. Open but the reigning men’s singles champion will not make the journey to the U.S.T.A. Billie Jean King National Tennis Center.

Dominic Thiem announced on Wednesday that he would not play again this season because of a lingering right wrist injury that began troubling him in June at the Mallorca Open and also forced him out of Wimbledon.

“The past six weeks I’ve been following the medical advice, wearing the wrist splint, doing exercise to stay in shape before starting to train back on court,” Thiem said in a social media post on Wednesday. “My recovery was going really well, but then last week I hit a ball during training and started to feel some pain again. I went straight to see the doctors. After some tests, they said that my wrist needs more time, so we’ve all agreed on being conservative.”

Even without that setback, Thiem’s chance of returning for best-of-five-set matches in New York was a long shot. He has an intense, full-throttle style and takes huge cuts at the ball that produce exceptional spin.

Returning to his previous level will be a major challenge. Wrist injuries can bedevil tennis players, keeping great talents like Juan Martin del Potro and Kei Nishikori off tour for extended periods.

Thiem’s withdrawal from this year’s U.S. Open is the latest blow to the men’s tournament. The five-time champion Roger Federer withdrew this week shortly after his 40th birthday, announcing that he would undergo a fourth knee surgery. Participation by the four-time champion Rafael Nadal is in doubt because of a recurrence of the left foot condition that first troubled him in his teens.

Novak Djokovic, the world No. 1 and the only of the so-called Big Three to take part in the Olympics, failed to win a medal in Tokyo and withdrew before the bronze medal mixed doubles match, citing a shoulder injury.

Some leading women are also in danger of missing the U.S. Open. Serena Williams has not played on tour since retiring in the first round of Wimbledon last month because of a right hamstring injury. She has yet to confirm whether she will play in New York. No. 13 Simona Halep, a former No. 1, withdrew from the Western and Southern Open on Wednesday because of a torn right adductor muscle. No. 14 Jennifer Brady, an Australian Open finalist this year, retired from her match on Wednesday against Jelena Ostapenko because of a left knee injury.

Djokovic will presumably do all he can to make it to New York as he chases the first Grand Slam in men’s singles since Rod Laver did it in 1969. Djokovic has already secured the first three legs of the Grand Slam, winning the Australian Open, the French Open and Wimbledon. But the physical and emotional load of playing in the Olympics far from New York or Djokovic’s home base of Monte Carlo, Monaco, could certainly make his U.S. Open challenge more daunting.

A new generation is rising, led by Daniil Medvedev, Stefanos Tsitsipas and Alexander Zverev. All three have won significant titles, and Zverev just won the Olympic gold medal in singles, defeating Djokovic in the semifinals. But for now, they have been unable to beat Djokovic or any of the Big Three to win a Grand Slam title.

Thiem’s best results have traditionally come on clay, and he reached the French Open final in 2018 and 2019. But he has established himself as a multisurface threat, and last year in New York, he managed to prevail in a nervy, five-set U.S. Open final against Zverev in which both combatants often looked overwhelmed by the prospect of winning their first Grand Slam singles title.

Thiem managed it by becoming the first player to rally to win from two sets down in a U.S. Open final since Pancho Gonzales in 1949.

“We both had it on our rackets,” Thiem said of his friend Zverev.

At 27, Thiem became the first currently active player in his 20s to win a men’s Grand Slam singles title, putting an end to the winning streak of the Big Three even if Thiem did not have to face any of them along the way.

But instead of getting wings from that breakthrough victory, Thiem has gone in a more earthbound direction, struggling not only with his wrist injury but his motivation during the coronavirus pandemic, which has made travel on tour a psychological burden for many tennis players.

Since the 2020 U.S. Open, Thiem has failed to win another tour title and has been unable to advance past the quarterfinals in any of the three major tournaments he has played.

He will get no chance to improve on that in New York and for the second straight year, the reigning men’s singles champion will not defend his title. Nadal chose not to make the trip in 2020, and at this stage it also appears unlikely that he will make the trip in 2021.