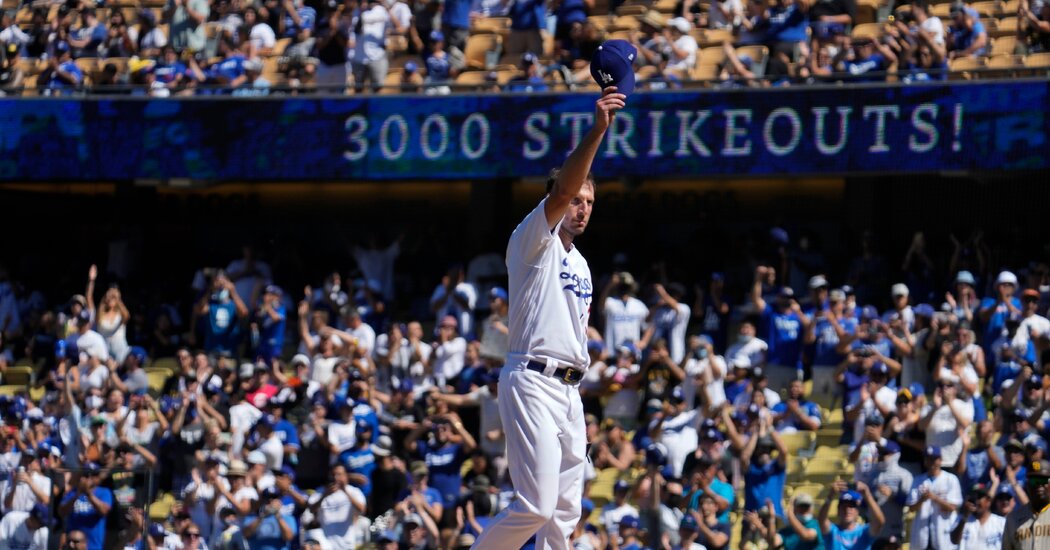 Chris Snyder, the Arizona Diamondbacks’ starting catcher on April 29, 2008, was known for being chatty behind the plate during games. So when his friend Jack Cassel, the Houston Astros’ starting pitcher that day, came to bat in the third inning, Snyder asked Cassel about his younger brother, Matt, the backup quarterback to Tom Brady on the New England Patriots in the N.F.L.

But when Cassel noticed a 23-year-old pitcher fresh out of the bullpen making his major-league debut and reaching 96 miles per hour in his warm-up on the mound, he politely asked Snyder to zip it.

“I forgot exactly what I said but I was like, ‘Don’t talk to me this at-bat. I got to lock it in,’” Cassel recalled in a phone interview. “The velocity was registering up on the board at Chase Field. And I could also see it myself because I didn’t throw that hard.”

After six pitches — the last a fastball blown past the overmatched pitcher — Cassel became very first major leaguer to be struck out by the Diamondbacks’ top prospect at the time, Max Scherzer.

There is little shame in getting dispatched from the plate by Scherzer, now 37. Throughout a career that has spanned 14 seasons, four teams, eight All-Star Game selections, three Cy Young Awards and one World Series title, Scherzer is one of the elite pitchers of this, or any, generation and has embarrassed many hitters with his powerful right arm.

And in an 8-0 victory against the San Diego Padres on Sunday in Los Angeles, Scherzer was at his best, sending batter after batter back to the dugout muttering to themselves. Scherzer, the Dodgers’ ace, threw an immaculate nine-pitch, three-strikeout second inning and flirted with a perfect game. In the fifth inning, with a punch-out of first baseman Eric Hosmer, Scherzer joined baseball’s 3,000-strikeout club.

Hosmer, though, got a bit of revenge by breaking up Scherzer’s bid at a perfect game with a one-out double in the eighth inning.

Although he couldn’t notch a second historic feat in the same game, Scherzer became the 19th person to reach 3,000 strikeouts, a club that includes Hall of Famers like Tom Seaver, Steve Carlton, Bob Gibson and Fergie Jenkins. Pitching like a player still in his prime, Scherzer may continue climbing the major-league career strikeouts list, which is topped by Nolan Ryan, who pitched until he was 46 and struck out an outrageous 5,714 batters.

“There’s not too many people who have reached this milestone,” Scherzer said. “It’s an awesome thing to accomplish. I love strikeouts and, to me, this is a testament to durability.”

In an era of baseball defined by more velocity, more movement on pitches and more strikeouts, few have been better than Scherzer. Of the pitchers with at least 1,000 innings since the start of the 2012 season, he led all with a strikeout rate of nearly 32 percent entering Sunday. Nicknamed “Mad Max” and known for a meticulous workout and running regimen, Scherzer has maintained an average fastball velocity around 94 m.p.h. at this age.

“He was destined for it,” Dodgers star outfielder Mookie Betts said of Scherzer’s strikeout achievement. “All the work he puts in, who he is, everything that he does. It sounds kind of weird, but I expect nothing less from him.”

Scherzer’s career arc can be traced through his strikeouts. A first-round pick of the Diamondbacks out of the University of Missouri in 2006, he reached the majors two years later. In Scherzer’s debut, Edgar Gonzalez started for the Diamondbacks, but after Gonzalez coughed up six runs, Scherzer came in from the bullpen.

With the Diamondbacks trailing by 6-2, Scherzer inherited a runner on second base with two outs in the third inning. Cassel, then 27, knew of Scherzer’s reputation as a hard-throwing youngster but felt good after smacking a single in his previous at-bat against Gonzalez. Soon, Cassel saw he was in trouble.

“He had this unorthodox delivery — his front side went high, the arm came around and it wasn’t straight over the top, more like three-quarters,” Cassel said. “He hid the ball well. With that arm angle and with that velocity, I could see why this guy was good.”

Cassel moved back in the batter’s box and choked up on the bat, hoping to make up for his slower bat speed and poke the ball into right field. It helped once: After two balls, taking a strike and whiffing at another offering, Cassel fouled off the fifth pitch. Then Scherzer rocketed a 96 m.p.h. fastball past Cassel’s bat with his ferocious head-snapping delivery.

“I got a piece of him,” Cassel said of the foul ball, laughing. “That was something to hang my hat on, I guess.”

In all, Scherzer tossed four and one-third perfect innings of relief, setting a major league record for a pitcher making his debut as a reliever by retiring 13 consecutive batters. He struck out seven.

Worried that Scherzer’s manner of throwing may lead to injuries, the Diamondbacks traded him to the Detroit Tigers ahead of the 2010 season. There, Scherzer overcame a brief demotion to the minor leagues, added a curveball and become more of a strikeout threat, helping the Tigers reach the 2012 World Series and winning the 2013 American League Cy Young Award.

Scherzer joined the Washington Nationals before the 2015 season on a seven-year $210-million deal that he turned into a bargain. Using his intellect and raging competitiveness to find new ways to get better each year, he carried the Nationals for the next six and a half years. (He once pitched with a broken nose and black eye sustained during batting practice.)

In 2015, he threw two no-hitters. In 2016 and 2017, he won back-to-back National League Cy Young Awards. On May 11, 2016, Scherzer tied Kerry Wood, Roger Clemens and Randy Johnson for the major-league record for strikeouts in a nine-inning game with 20. And in October 2019, he guided the Nationals to their first World Series title.

Out of playoff contention, the Nationals traded him to the defending World Series champion Dodgers before the July 30 trade deadline. Scherzer, also a top players’ union representative, has a 0.88 E.R.A. and 72 strikeouts, including nine on Sunday, with his new team. They have won all eight of his starts and saw him come within five outs of a perfect game on Sunday.

After notching his 3,000th strikeout, Scherzer quickly acknowledged the standing ovation from the Dodger Stadium crowd — which included his parents, wife and children — by raising his cap high above his head. But in his typical fashion, he didn’t smile, too focused on the game, and he got right back to work.

“When you win awards or you accomplish a milestone, it usually takes a year to fully appreciate what that means in the context of everything,” Scherzer said. “Hopefully I keep pitching and keep dreaming up new things to do, and hopefully you get more perspective and appreciate the history of this more a year from now.”

Watching from afar, Cassel, now 41 and an executive with Nasdaq who lives in California, has enjoyed watching Scherzer’s major-league career evolve since that very first strikeout. So have his two sons, who have Scherzer baseball cards. One has a Scherzer jersey.

“It’s just great to see his career progress,” said Cassel, who appeared in 15 games for the Padres and Astros in 2007 and 2008. “I’d seen it early and there’s a lot of good, talented guys that get to play the game, so it’s always fun to watch the ones that make it. That’s been a cool part with Scherzer specifically, just watching him continue to compete and, even with age, continue to get better at his craft.”

Not long ago, Cassel said he got a text message from a friend informing him that old footage of Cassel pitching was on M.L.B. Network. Wondering which game that could possibly be given his brief career, Cassel saw that the channel was airing Scherzer’s major-league debut, and thus he was also on TV.

“I’m Mr. Nobody and here’s a Hall of Famer,” he said. “I take it as a compliment to be associated with him and be on that same field with him. I’m a fan of his and what he’s done with his career and for the game.”

Cassel said he recorded the replay of the 2008 game and showed it to his children, teaching them the lesson of learning from failure, particularly in a sport full of it. Even now, he laughs about the strikeout versus Scherzer. He clearly isn’t alone.