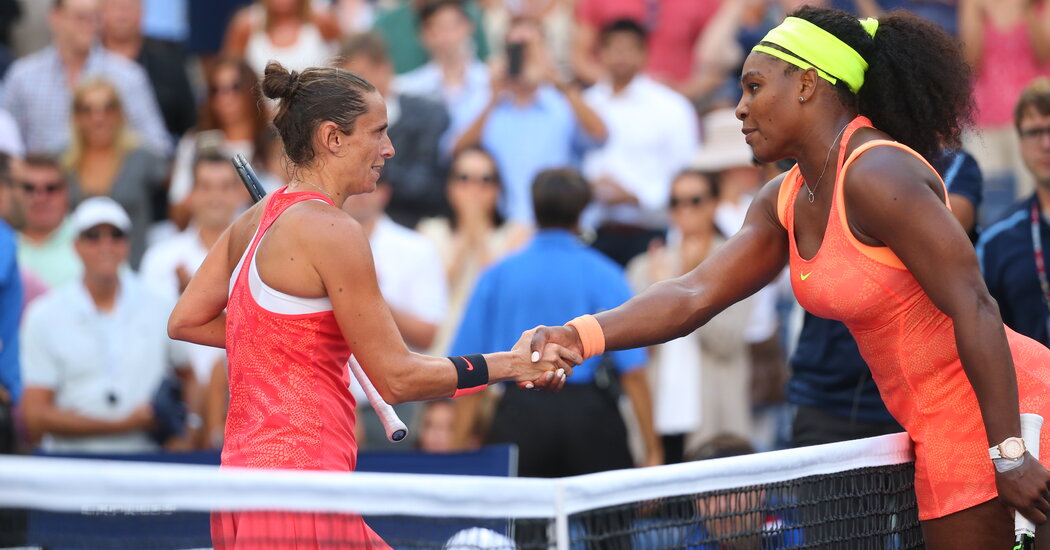 In 2015, Roberta Vinci improbably put an end to Serena Williams’s bid for a Grand Slam at the U.S. Open and called it “the best moment of my life.”

Six years later, Vinci has not changed her mind.

“People remember me for the Serena match, and I really appreciate that,” Vinci, 38, said in an interview from her home in Milan on Tuesday. “It still gives me a lot of pleasure. They still ask me today how I could have beaten her.”

Tennis runs on upsets: the newcomer who shocks the veteran; the outsider who takes down the star. Rarely will a professional tournament go by without at least one surprise, but Vinci’s win was a genuine shock, and it was magnified by the setting and the timing. It came on the largest stage in tennis, Arthur Ashe Stadium, with the top-ranked Williams just two victories away from one of the biggest achievements in sports.

Vinci was unseeded at the 2015 U.S. Open at age 32 and had never won so much as a set against Williams in their previous matches. But her 2-6, 6-4, 6-4 semifinal victory is a reminder, as the top-ranked Novak Djokovic takes aim at a Grand Slam in the same stadium this week, that nothing is a given at this level, particularly with the pressure cranked up to new heights.

Spoilers lurk, and they have thwarted pursuits of Grand Slams at or near the final hurdle. The Australian players Jack Crawford and Lew Hoad both came within one match of winning all four major singles titles in the same year. Crawford lost to the British star Fred Perry in the final of the U.S. Championships in 1933, before the term Grand Slam had gained wide currency in tennis. Hoad was beaten by Ken Rosewall, another Australian, in the final of the 1956 U.S. Championships. Martina Navratilova, riding a 74-match winning streak in singles, was upset in the semifinals of the 1984 Australian Open by a 19-year-old Helena Sukova when the Australian Open was the final Grand Slam tournament on the calendar instead of the first.

“I was more concerned with playing Martina than I was about the Grand Slam,” Sukova said in an interview from her home in Prague on Tuesday. “I was really a newcomer and so I was really concentrating on my own game and improving my game and I was far from thinking about any record or her breaking any record.”

Sukova, a big underdog, said her goal was to win five games in a set.

“I had never won more than three in any set we had played previously,” Sukova said. “I lost the first set 6-1, but when I got five games in the second set, I looked at my coach and said, ‘I achieved my goal!’”

She won that match 1-6, 6-3, 7-5 before losing to Chris Evert in the final. Sukova, a tall player with big power for that era, reached three more Grand Slam singles finals, but lost all three. She and her doubles partner, Jana Novotna, did come to within one match of a Grand Slam in 1990, only to lose in the U.S. Open final to Gigi Fernandez and Navratilova.

Consider that payback, but Sukova, now a practicing psychologist, said she wished she could go back and play those matches with her new skills.

“I think it would have made a difference if I knew what I know now about the mind, I would have won more,” she said. “But it’s always like that, once you’re older, you’re wiser, but the body is not faster.”

Unlike Sukova, Vinci was well aware of the tennis history at stake in 2015, and she believes the looming possibility of a Grand Slam helped her against Williams.

“I think it played a big part in that match,” Vinci said. “To win the U.S. Open meant reaching an incredible goal for her, and I think the combination made her play with a lot of pressure.”

Djokovic will most likely not face anyone as unexpected as Vinci in the final rounds at the U.S. Open, although he will meet an Italian underdog in the quarterfinals: the huge-hitting Matteo Berrettini.

But Berrettini, 25, is the No. 6 seed and an established threat who already has pushed Djokovic hard twice this year in Grand Slam tournaments before losing in the quarterfinals of the French Open on clay and in the final of Wimbledon on grass.

“The hammer of tennis,” Djokovic said late Monday night of Berrettini, comparing the power of his serve and forehand to that of Juan Martin del Potro, the 2009 U.S. Open champion from Argentina. Perhaps it was just a coincidence that Del Potro, recovering from his latest serious injury, visited the tournament grounds on Tuesday.

“Next to Del Potro, he’s probably the hardest hitter of the serve and forehand,” Djokovic said of Berrettini. “If he serves well, which is his biggest weapon, he’s tough. He’s tough on any surface to play against.”

Dodge Berrettini’s bullets and Djokovic will likely face No. 4 seed Alexander Zverev, the German who beat him in the semifinals of the Olympic men’s singles tournament and has been playing the best tennis of his career. Winning a potential matchup against Zverev would likely set up a duel with No. 2 Daniil Medvedev, a shock-absorbing hardcourt master from Russia, in the final.

Berrettini, Zverev and Medvedev, all big new-generation talents, are not Djokovic’s customary rivals in the homestretch. Neither Rafael Nadal nor Roger Federer played in this U.S. Open. But Berrettini, Zverev and Medvedev certainly would represent quite a 1-2-3 punch and a fitting challenge for Djokovic as he chases his crowning moment in New York.

Williams was in a similar spot in September 2015, already the most successful player of her era and a clear No. 1. Like Djokovic, she too already had won four majors in a row — the so-called Serena Slam — but had not achieved the Grand Slam by winning all four in the same calendar year. Djokovic also won four majors in a row over two seasons, from 2015 to 2016.

Williams put herself in position to join the list by making a series of great escapes at the Grand Slam tournaments in 2015, winning the French Open despite playing much of it with a high fever and leaving her room (and in some cases her bed) only for her matches. Coming into the Vinci match, Williams had won all 11 of her three-set matches at majors in 2015, including a tough three-setter against her sister Venus in the quarterfinals.

It was a phenomenal run of gutsy, big-point tennis, but Williams’s luck ran out against Vinci, whose crisply sliced backhand, rhythm shifts and surprise attacks to the net were just the right mix to play tricks on Williams’s timing and mind.

Vinci also embraced the occasion: cupping her hand to her ear and shouting to the crowd after prevailing in one extended rally.

“I didn’t start the match thinking about winning, but I told myself to try because sometimes miracles happen,” Vinci said on Tuesday. “In the tensest moments, especially towards the end, I tried to think that on the other side of the court it was not Serena Williams but just a person and just to try to hit the ball over the net as often as possible.”

She managed it often enough to complete her comeback and reach her first and only Grand Slam singles final, losing to her friend and Italian compatriot Flavia Pennetta in straight sets.

Vinci, who retired in 2018, said she and Williams had never discussed their U.S. Open match, but what is clear is that they both will never forget it.

“Serena lost to the Grand Slam more than anything else,” Navratilova told me on the night of that upset. “But still, Vinci had to finish it off.”