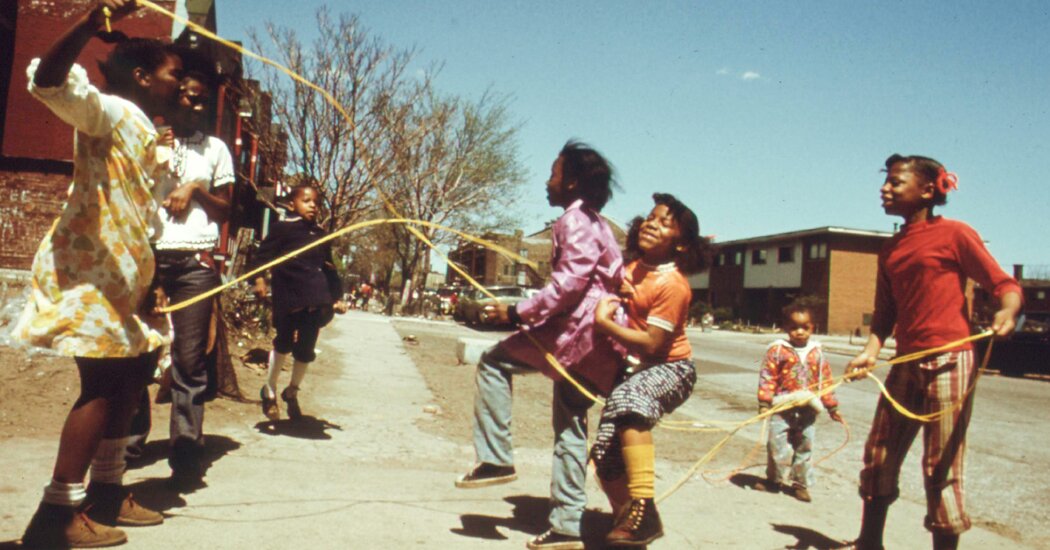 THREE GIRLS FROM BRONZEVILLE
A Uniquely American Memoir of Race, Fate, and Sisterhood
By Dawn Turner

Publishing is littered with timeworn tales of resilience and redemption — stories of exceptional people who, with grit and pluck, good luck and supportive mentors, clawed their way out of poverty to reach the heights of mainstream success. From tragedy to triumph, homelessness to Harvard.

Dawn Turner’s wholehearted memoir, “Three Girls From Bronzeville,” is not one of those tales. Turner, a former columnist for The Chicago Tribune and the author of two novels, interrupts the monolithic narrative of Black Chicago as ruined and broken, as well as the one-note stereotypes about growing up in public housing. In their place she offers a textured portrait of a moment in time in a particular place: the 1970s in Bronzeville, a neighborhood on the South Side of Chicago that was the landing place for most of the city’s hundreds of thousands of new Black residents who’d fled the terrorism of the Jim Crow South beginning in the early 20th century. There, according to Turner’s grandmother — who came up from Mississippi in the first wave of the Great Migration — they did what Black people have always done: “We took a bunch of scraps and stitched together a world.”

In episodic chapters that read like self-contained short stories woven together into a whole, Turner seeks to understand how three Black girls with very similar aspirations ended up with wildly divergent fates. Turner, her younger sister, Kim, and her best friend, Debra, were raised in the same environment, a land of milk and honey soured by neglect both benign and intentional — redlining, contract buying and other policies that extracted Black wealth, opportunity and hope. Bronzeville “specialized in the broken, the halved,” Turner writes, “a walled-off world away.”

But as this book shows, it wasn’t only that. In the clotheslines that stretched between buildings one could see the full spectrum of economic circumstances in the community: “The steel-mill workers’ jumpsuits scarred by flames. The bloodstained slaughterhouse workers’ aprons. The medical students’ monogrammed lab coats. The print blouses and A-line skirts of schoolteachers and social workers. All spirited by the wind, swaying and dancing on the lines.”

Driving Turner’s narrative is a vexing question that continues to haunt her: How did she manage to accumulate the signifiers of success — a college degree, a career, a husband, a home outside the city — while Kim lost a baby as a teenager, sank into alcoholism and died of a heart attack at 23; and Debra battled drug addiction and eventually shot a man to death?

Turner’s suspension between two worlds provides an ideal vantage for the book. Even when she leaves Bronzeville, she never leaves it behind. Like the poet Gwendolyn Brooks and the playwright Lorraine Hansberry, she is a native daughter of Black Chicago with a bone-deep knowledge of the place and its people. Rather than judge her friend and sister for their choices, she holds fast to her through line: “There but for the grace of God go I.”

Recalling their youth, Turner describes the girls’ unchaperoned roaming through the asphalt landscape with attentive detail, hitting all the familiar touchstones of ’70s Black girlhood: Noxzema, training bras, the hot comb on the stove. The Commodores’ “Brick House” on the playlist — “36, 24, 36, oh what a winning hand” — “Good Times,” “The Jeffersons” and “Roots” on television.

Dawn, Debra and Kim all had a leg up in life, as so-called children of the dream: the first generation to realize the hard-won freedoms of the civil rights movement. But only Turner was able to grab hold of the advantages, entering the University of Illinois at Urbana on the early tide of affirmative action, one of just a thousand African American students in a sea of 34,500. “All I knew of my white peers was what I’d gleaned from ‘The Brady Brunch,’” she writes, and “I was sure that what they knew of Black folks, they’d seen on their late-night newscasts.”

Turner’s book began as a series of Tribune columns about Debra, who in 1998 killed a man she’d been smoking crack with. She was convicted of murder in 2000 and served 19 years. When Turner pitched the story about her close friend to her editor at The Tribune, comparing Debra’s background to her own, he told her bluntly, “That could never have been you.” She remembers thinking how wrong he was in “acting as if the right combination of rage, desperation, hopelessness, drugs couldn’t land you in a place you never dreamed.”

There but for the grace of God.