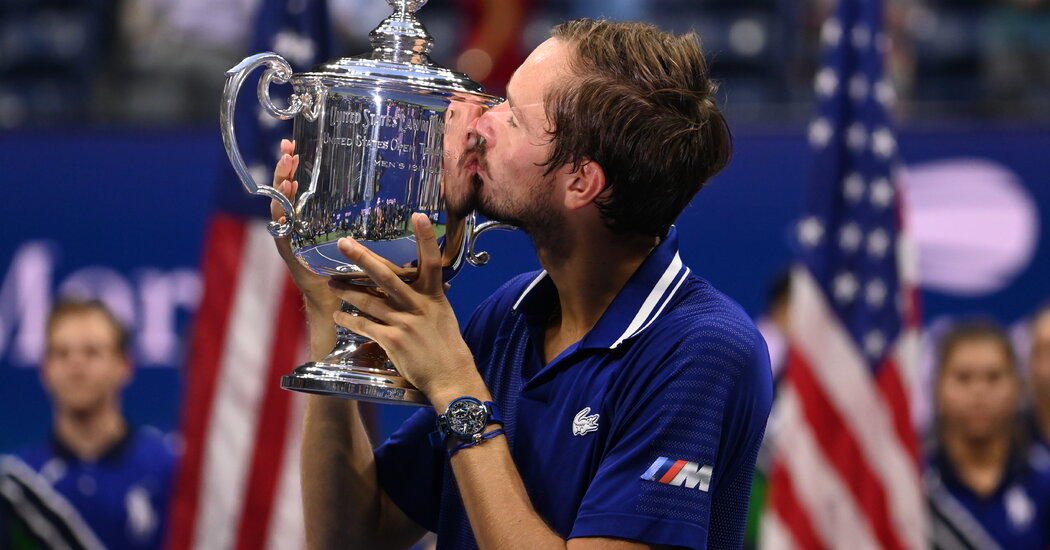 Novak Djokovic said he was going to play this match as if it were the last of his career, that he was going to pour every ounce of his heart and soul into trying to do what few thought could ever be done again.

It was not enough.

With a startling display of power and creativity, Daniil Medvedev upset Djokovic, 6-4, 6-4, 6-4, in the final of the U.S. Open on Sunday, ending Djokovic’s bid to become the first man in 52 years to win all four Grand Slams in a calendar year. It was one last twist in a tournament that overflowed with stunning performances.

For at least another year, Rod Laver will remain the lone member of the most exclusive club in modern men’s tennis, and the 2021 U.S. Open will forever belong primarily to an 18-year-old British woman named Emma Raducanu, who went from being the 150th-ranked player to a Grand Slam champion in the most unlikely tennis tale of them all.

This was supposed to be Djokovic’s moment, the day that he would finally surge past Roger Federer and Rafael Nadal and officially become the greatest player of all time.

Instead, whatever spirits pull the strings of this uniquely exasperating sport intervened in the form of a lanky 25-year-old Russian, a neighbor of Djokovic’s in their adopted home of Monaco, who is sure now to create any number of awkward encounters at Monte Carlo’s cafes and grocery stores and at the local tennis club where both of them train.

Medvedev started fast, breaking Djokovic’s serve in the first game of the match and giving Djokovic few chances to take the first set. That was not supposed to matter. Djokovic, 34, had been shaky early in matches for two weeks, before raising his level and storming back for win after win. Surely, he would flip the script once more.

And he had the opening, three break points on Medvedev’s first service game, and then another with Medvedev serving at 1-2 in the second set, when the sound system malfunctioned and interrupted one of Medvedev’s serves, giving him a fresh chance to save the game.

When Medvedev took that point and then another, the weight of it all finally broke the man who had seemed unbreakable. Djokovic dismantled his racket with a violent smack on a court that had delivered him so many championships before.

A game later, Medvedev curled a backhand onto Djokovic’s toes as he charged to the net, and when Djokovic’s volley floated long, the end was in sight.

Djokovic had beaten Medvedev most recently in a lopsided battle in February for his ninth Australian Open title, a moment that seems a lifetime ago, when no one was talking about anyone winning a Grand Slam.

And yet, when the draw for the U.S. Open came out two weeks ago, it looked daunting for Djokovic. Matteo Berrettini, the big-serving Italian, loomed in the quarterfinals. Alexander Zverev, the talented German who knocked off Djokovic at the Olympics and was the hottest player in the world at the start of this tournament, was likely to be his semifinal foe. And if he could get through those players, he was most likely going to meet Medvedev, the world’s second best player, whose game, a beguiling mix of power and spins, seems to grow more dangerous with each passing month. He was a fitting final obstacle for Djokovic in the hunt for his sport’s biggest prize.

Medvedev stands 6 feet 6 inches tall and is as skinny as a bamboo pole. At first glance, he looks like nobody’s idea of a professional athlete. He will scurry around the court creating shots that few can see coming, then bomb an ace or pound a flat backhand down the line.

Coming into the tournament, conventional wisdom held that the only way to beat Djokovic was to take the racket out of his hands with so many unreturnable balls that one of the greatest defenders in the sport would not be able to survive the onslaught.

Medvedev did that and so much more, pushing Djokovic back on his heels and handcuffing him at the net on those handful of points that decide every tennis match, with history on the line and 23,000 fans desperate to witness it.

For Djokovic, the loss delivered a disappointment that practically no one but Serena Williams could understand. She had been the last player to enter the year’s final major championship with a shot at the Grand Slam. She, too, fell to an underdog, Roberta Vinci of Italy, on the same court in Arthur Ashe Stadium, in the 2015 semifinals.

On a personal level, this loss most likely stung Djokovic in a way that Williams may never have felt. Djokovic has spent most of his adult life chasing legends who claimed this sport as their own just a few years before he burst onto the scene. He proved early on that he could be the equal of Rafael Nadal and Roger Federer, then sagged back, only to come back stronger and repeat the cycle time and again.

He entered this tournament tied with Federer and Rafael Nadal in the race for the most career Grand Slam titles, with 20. He desperately wants that record, to seal his legacy as the greatest player in tennis history.

Djokovic’s compatriots from Serbia worship him, but he has been mostly unloved elsewhere, until Sunday, when seemingly everyone wanted to see him deliver. Djokovic has spent more time ranked as the world No. 1 than Nadal or Federer, and is the only one who has a winning record against those two chief rivals. Yet nothing would declare him as the greatest of all like winning all four Grand Slam tournaments in a single year.

Federer and Nadal have never come close, and most likely never will. This year, Djokovic beat Nadal in his kingdom in Paris, where he has won 13 French Open titles. Then Djokovic captured Wimbledon for a sixth time in July, on the grass that Federer has long treated like his front lawn.

He could not win the Olympic gold medal in Tokyo for the fourth jewel of the so-called Golden Slam, something only Steffi Graf has accomplished.

Djokovic soaked up the adoration of his fellow athletes in the Olympic Village, but lost to to Zverev in the semifinals and then Pablo Carreño Busta in the bronze medal match. The heat and weight of the journey were beginning to take their toll.

Djokovic took nearly a month off from competition, then came to New York to finish his mission, to make things right. A year ago he swatted a ball in anger after losing the first set of his fourth-round match, without any regard for where the ball was headed. It rocketed toward the throat of a line judge, requiring an automatic disqualification.

Djokovic’s first six matches at the 2021 U.S. Open followed a mostly familiar pattern — some early shakiness, including losses in first sets of four consecutive matches, before Djokovic the assassin emerged to take care of business.

It took five sets against Zverev in the semifinal. When it was over, and there was just one match to go, Djokovic embraced the size of the moment at hand — with his heart and his soul and everything else he had. Surely, that would be enough.

Tennis, though, can be so hard sometimes, even for the world’s greatest player, who has made it look so easy for so long.

He refused to go quietly, standing firm late in the third set and saving match point as Medvedev succumbed to the pressure of closing out his first Grand Slam title. He produced two double faults and an ugly backhand into the net, and Djokovic rode the deafening cheers of the crowd to battle back to within a game.

It had taken so long for the fans to get behind him, an entire career really, but now they were there, and as Djokovic sat in his chair, he smiled at the throngs, teared up momentarily, and pumped his fist, but knew how deep the hole he had dug for himself really was.

Maybe one day that moment might serve as a decent consolation for not winning the Grand Slam. He would later say those rousing cheers meant as much as a 21st Grand Slam title. There are worse things.

Back on the court, Medvedev had his nearly insurmountable lead, and he made sure not to waste his second chance to serve out the championship. He blasted one last serve that Djokovic could not get back over the net to end the most difficult of all quests in a way that few could have imagined.

There would be no Grand Slam, but there was love, and Djokovic, who is at once a sentimentalist, a warrior and a deep thinker with an impetuous streak that has often gotten him into trouble, knew that was not nothing.

“My heart is filled with joy, and I am the happiest man alive because you guys made me feel that way on the court,” he said just before raising a plate instead of a trophy. “I never felt like this.”