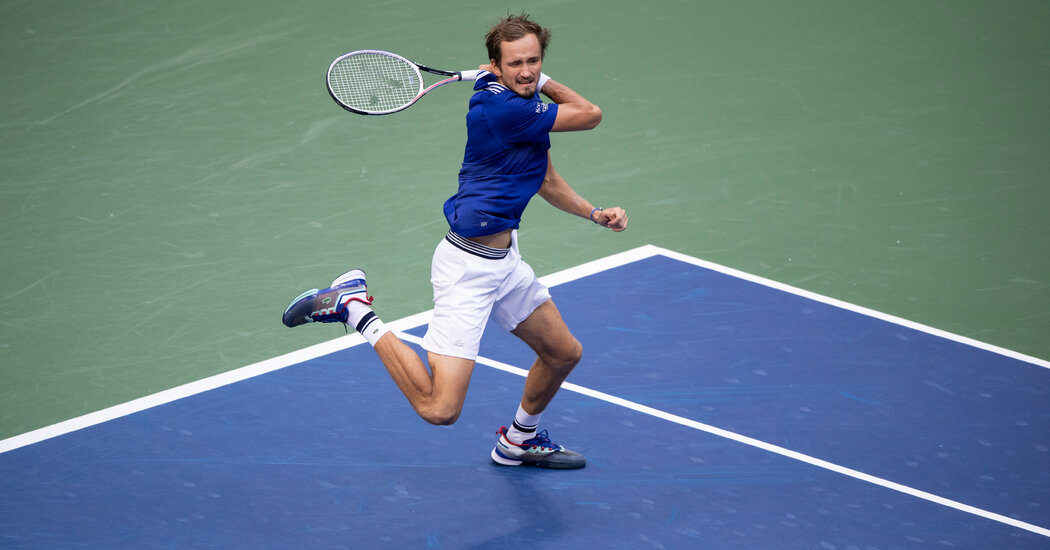 When Daniil Medvedev made his first U.S. Open final two years ago, he did it to a soundtrack of frequent boos, leaning into a villain role he acquired during a contentious third-round match and goading the crowd before ultimately winning it over with his valorous losing effort in the final against Rafael Nadal.

This year, on his second trip to the final, Medvedev raced quietly through the draw, winning with little drama or excitement compared with the teenagers Leylah Fernandez and Emma Raducanu, who have electrified the women’s draw, and with Novak Djokovic’s quest for the Grand Slam on the other half of the men’s draw.

Medvedev, 25, awaits the winner of the second semifinal between the top-seeded Djokovic and the fourth-seeded Alexander Zverev.

Medvedev has dropped only one set in the tournament, against the qualifier Botic Van de Zandschulp in the quarterfinals. He has spent only 11 hours and 51 minutes on court en route to the final, less time than Fernandez needed to reach her final while playing in the best-of-three format vs. the best-of-five for the men.

Medvedev played his typical style against Auger-Aliassime, hitting big serves while neutralizing his opponent’s power by standing in the outer realms of the court to return.

Auger-Aliassime, 21, found success midway through the second set, coming forward with increasing frequency to take advantage of Medvedev’s distal court positioning. After earning a break point with a 20-shot rally he finished at net, Auger-Aliassime broke on a Medvedev double fault to go up by 4-2 in the second.

“In the second set, I think everybody felt like it’s going to be one-set-all,” Medvedev said in his on-court interview. “You never know where the match is going to go.”

After extending his lead to 5-2 with four unreturnable serves, Auger-Aliassime began to falter. He earned two set points at 5-3, and came forward on the second one but slipped and badly missed a forehand volley.

“He didn’t give me much opening,” Auger-Aliassime, who was playing in his first major semifinal, said in his news conference. “Against a player like that, you don’t really have room for mistakes, room for losing your focus, which I did at the end of the second. He took advantage of it and I didn’t get another chance after that.”

“He missed one volley, I made one good point, and the match turned around completely,” Medvedev said. “I’m really happy. I don’t think I played my best today, but I’m really happy to be in the final on Sunday.”

When Auger-Aliassime served again at 5-5, he handed Medvedev a break at love with three unforced errors and a double fault. Medvedev closed out the set a game later with an ace. “That’s the moment where I could break him, mentally,” Medvedev said. “And that’s what happened.”

The third set was a rout, with Medvedev breaking in the third and fifth games, and Auger-Aliassime no longer charging the net as he once had. Medvedev finished the match with his own venture to the front of the court, knocking away an overhead that Auger-Aliassime could barely reach.

Medvedev finished with 37 winners to Auger-Aliassime’s 17. Medvedev particularly dominated the shortest exchanges in the match, winning 63 percent of points that lasted four or fewer shots.

This is the first U.S. Open in which none of the men’s or women’s singles semifinalists has been an American. None advanced past even the fourth round.

There have been, however, American successes in other draws.

The Americans Coco Gauff, 17, and Caty McNally, 19, reached the women’s doubles final when one of their opponents, Luisa Stefani, retired during a first set tiebreaker with a knee injury. Rajeev Ram of Indiana won the men’s doubles title with his British partner, Joe Salisbury, beating Bruno Soares and Jamie Murray, 3-6, 6-2, 6-2.

Though Ram, 37, is older than Gauff and McNally combined, he said he saw no reason to set a finish line on his career.

“I feel like I don’t ever really put a timeline on it,” Ram said. “I enjoy it. I feel like I’m playing pretty well. Winning stuff like this helps me think that way.”