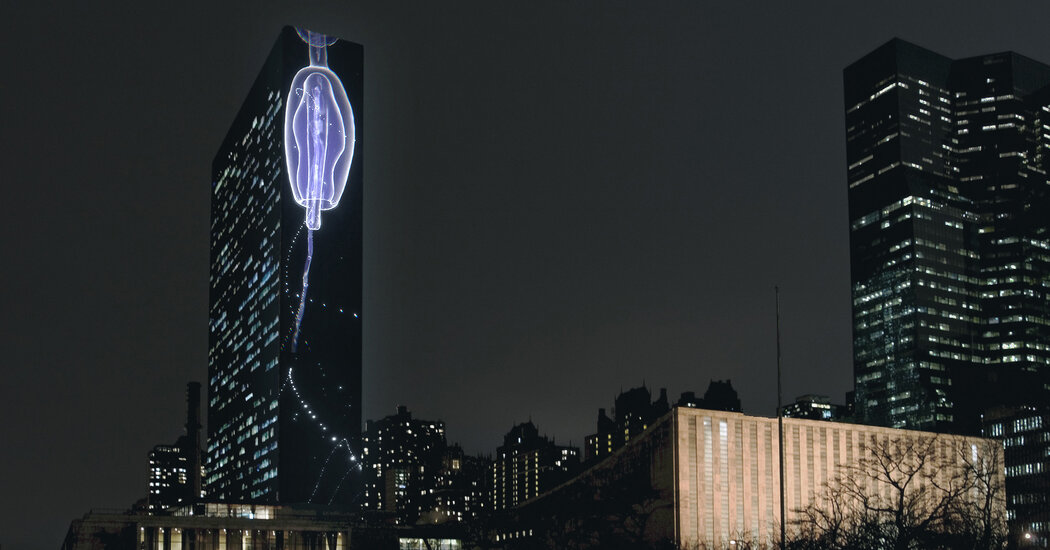 A little-known but crucial agent of carbon removal from the atmosphere — the siphonophore, which lives in what’s known as the twilight zone of the sea — will be highlighted during U.N. Climate Week in a video projection from a Danish arts collective.

The siphonophore is a bizarrely beautiful creature. Like a coral reef, it is composed of individual parts, known as zooids, which perform specialized functions. “Some are digesters, some are swimmers, some are reproducers,” Heidi Sosik, a senior scientist at the Woods Hole Oceanographic Institution said. “But they all get together. It is an interesting metaphor for humanity to think about.”

Next week, Sept. 21-24, in a light projection more than 500 feet high on the entire northern facade of the U.N. Secretariat building, a siphonophore will perform a sinuous, pulsating dance nightly between 8 and 11 p.m. Coinciding with the meeting of international delegates, who will discuss how to counter human-caused climate change, the video, “Vertical Migration,” is intended to draw attention to the animal’s deep sea carbon removal system.

“It’s an assembly where world leaders meet and decide the future of the planet,” Rasmus Nielsen, one of the three founders of the politically minded Danish art collective Superflex, which made the video, said in a Zoom interview. “It seems that they have forgotten to invite someone. It’s like a birthday party and you forget to invite an uncle.” What’s been overlooked, Nielsen said, are all the other species whose fate depends on human activities.

Superflex chose to highlight the siphonophore as a representative of the mesopelagic zone of the sea, known as the twilight zone, which receives little to no sunlight. The inhabitants of the twilight zone are eaten by showier creatures, like tuna and swordfish. But at least as important is their own activity as consumers, which removes carbon that would otherwise be released into the atmosphere. “They come up at night when they can hide from their predators and chow down on carbon-rich organisms, and go down when the sun comes up to hide out in this deep twilight zone,” Sosik said.

It has been estimated that two to six billion tons of carbon are sucked down each year into the twilight zone, where it is stored indefinitely. That is several times the amount of carbon emitted by all the world’s automobiles. “The carbon pump that we’re talking about is tremendously important,” said Peter de Menocal, director of the oceanographic institution. “If this disappeared, the atmospheric carbon dioxide would go up more than 50 percent. These organisms make the earth habitable.”

He added: “This is a very humble call to action by showing a humble organism that itself illustrates the importance of cooperation.”

The artists at Superflex encountered the siphonophore in 2019 in the Coral Sea off the northeast coast of Australia, while leading an expedition sponsored by TBA21-Academy, a 10-year-old nonprofit in Europe dedicated to deepening awareness and preservation of the ocean through art. “One evening a marine biologist took us on a blackwater dive,” Nielsen said. “You go in the middle of the night and witness this giant migration that happens every night as these creatures come to the surface. They don’t have arms or two eyes, and they’re not scared of you. They come right up to you. You’ve never seen anything like this.”

When Superflex was approached to create a work for Climate Week by ART 2030, a nonprofit founded in Denmark to enlist artists throughout the world to highlight the U.N. agenda for sustainable development, they thought of the siphonophore. “We had a feeling of strong companionship with these creatures, which is strange because they are not like a golden retriever,” Nielsen said. “We get stuck with the pandas and the elephants that figure in a Disney movie. We decided, let’s invite this one, an unusual guest. It’s like all the science-fiction films you’ve ever seen happening every night in the world.”

Filming a siphonophore is a challenge. “Sometimes they come and stick to your goggles,” Nielsen said. “Sometimes they are five meters long, and when you approach, they break. They are like tissue.” Nielsen and his colleague, Jakob Fenger, would spend an hour tethered to a drop line on a blackwater dive to capture a few seconds of footage. (The third Superflex principal, Bjornstjerne Christiansen, was unable to make the journey that year.)

Based on their videos, along with those made by other divers, they devised animated simulations to create a 20-minute-long piece that will run in a continuous loop. “We have done something that is a combination of reality and animation to give you a sense of being close to the creatures,” Nielsen said. “In the film you see a switch of perspective. In the beginning we are looking at the siphonophore, and then it turns and you almost see the world from the animal’s perspective. A siphonophore doesn’t have eyes. How can you see the world from the perspective of the siphonophore? Through your imagination.”

In tandem with “Vertical Migration,” Superflex has created another work, “Interspecies Assembly,” to be installed in Central Park near the Naumburg Bandshell. It is a 46-foot circle demarcated by seven large slabs of pink marble, with the words of a contract carved into them. “By entering the circle of stones, you accept the contract to stay idle for at least five minutes,” Fenger said. “To understand other creatures on the planet, you have to be quiet and listen.” Superflex chose pink marble as an allusion to the coralline algae that coral polyps eat and which tint a reef. “The marble is going to be there much longer than us,” Christiansen said.

Although the existence of siphonophores is long known, research into their behavior is in the early stages. “One reason they are so difficult to study is that traditionally we learn about deep-sea creatures by casting a net,” Sosik said. “Something like a siphonophore doesn’t survive being caught in a net.” Her project at Woods Hole has developed and activated a slow-moving robot called a Mesobot that prowls stealthily in the ocean depths. Because the Mesobot generates little turbulence, the siphonophore does not mistake it for a threat and flee. The research team also employs shadowgraph imagery, which analyzes the bending of light rays that collide with the gelatinous organisms. “We are able to put down cameras and take 15 frames a second for hours on end,” she said. “They’re amazingly beautiful when they are in their habitat.”

The enormous amount of organic material in the twilight zone has attracted the interest of commercial fisheries, which could harvest it for fishmeal used in aquaculture and for the manufacture of krill oil and fish oil. “Humans have a history of over-exploiting protein sources in the seas,” Sosik said. Because most of the twilight zone lies outside territorial waters, international cooperation is necessary if it is to be protected.

By shining “Vertical Migration” on the Secretariat building, Superflex is bringing to light a massive and vital phenomenon that is obscure. “Sometimes research that is geared at peer review and ends up in an academic paper has a very limited impact on a wider audience or reality,” said Markus Reymann, director of TBA21-Academy, which partnered with ART 2030 on the project. “This is the first time we are doing anything on this scale. The flashy, splashy, huge monumental thing is an exception, an opportunity to communicate something iconic.”

Although the technology used to produce “Vertical Migration” is novel, the aim is to accomplish what artists traditionally seek — illuminating a feature of life that is typically overlooked. “The oldest trick in the book of art is that you have people fall into something they are not aware of,” Nielsen said. “We hope that people will stay for two minutes and start empathizing with the siphonophore. It is like a mesmerizing alien that you can enjoy from far away.”

And, if the conservation-minded creators have their way, this enjoyment will raise public awareness to a level that will motivate the delegates in the building to take steps to halt climate change and preserve the earth.