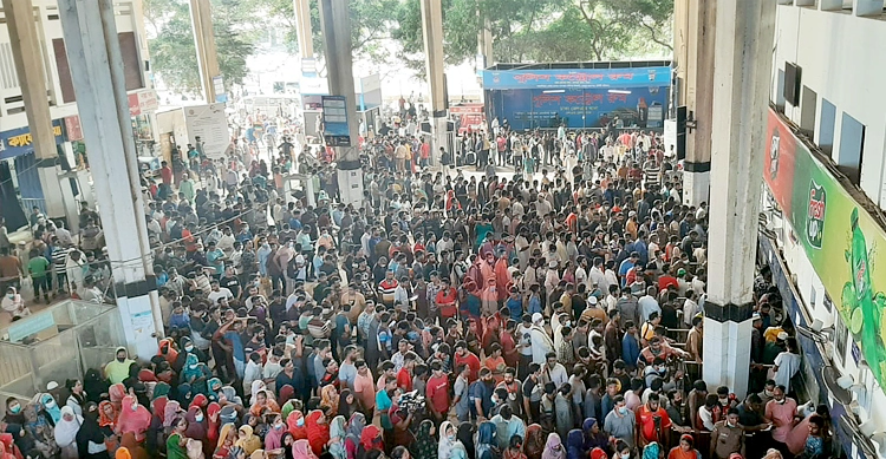 On the occasion of the upcoming holy Eid-ul-Fitr, the sale of advance train tickets has started from 8 am on the fifth day. On this day, advance tickets for the Eid journey on May 1 are being given. Many have been waiting in line since Tuesday (April 26) to get advance tickets for May 1st.

However, the crowd of ticket seekers has been less than in the last few days. Meanwhile, Eid special train has been added for the convenience of passengers. Passengers standing in line hope that everyone will be able to return with a ticket.

On Wednesday (April 26) morning, a picture was seen walking around the Kamalapur railway station area.

It can be seen that the passengers have already written the serial of standing in line on their own initiative. They have done this so that everyone can get tickets according to the serial. The Railway Security Force or RNB is assisting them in this work. If anyone wants to go out of the line, others are shouting from behind and obstructing. No one is daring to go before the line.

Alamgir Mia Khuku arrived at the station shortly after 10 pm on Tuesday. He has been waiting for a long time with the expectation that he will buy a train ticket without getting a bus ticket.

Khuku Mia told Jago News that there is a lot of traffic jam on roads and highways. I still tried for the bus ticket but did not get the ticket. So the two friends spent the night at the station for the train ticket.

Another ticket holder Imran Hussain said the same thing. He said, “I have already seen the news in various media that there will be a lot of traffic jam on the road during this Eid journey.” That’s why I didn’t try for a bus ticket. A few of us at the station have been waiting for two days to get tickets. Eid train journey is not a problem, again the amount of fare is less. Train travel is safe for us. I didn’t get a ticket yesterday, I hope I will get a ticket today, I will be able to celebrate Eid with my family in the village.

Besides, if Eid is on May 3, train tickets for May 2 will be sold on April 26. Return train tickets will be on sale from May 1 after the Eid journey.

Railway authorities have decided to run six pairs of special trains for the convenience of passengers during this year’s Eid journey. The official Eid journey has started by train from today .