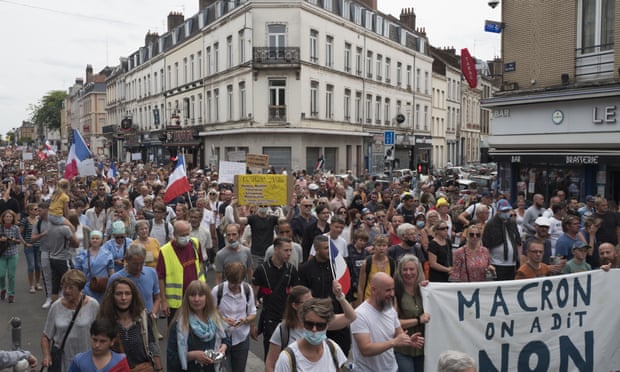 Thousands of people demonstrated in the streets of France again against the government’s Covid-19 vaccination policies, AFP reports.
Saturday’s protests were called for the sixth weekend in a row to denounce a new “health pass” system announced by President Emmanuel Macron that they see as unfairly restricting the rights of the unvaccinated. Under the system, introduced progressively since mid-July, anyone wishing to enter a restaurant, theatre, cinema, long-distance train, or large shopping centre must show proof of vaccination or a negative test. Around 200,000 people have marched in previous weekends, according to interior ministry figures, while organisers claim the real number is nearly double that. The government insists the pass is necessary to encourage vaccination uptake and avoid a fourth national lockdown, with the unjabbed making up eight or nine out of every 10 Covid-19 patients admitted to hospital.

As coronavirus cases continued to rise across the US, thousands were expected nonetheless to attend a concert in Central Park on Saturday night, staged to celebrate New York City’s recovery amid the pandemic.

Bruce Springsteen, Paul Simon, Jennifer Hudson, Carlos Santana, LL Cool J and Andrea Bocelli were included in the lineup for We Love NYC: The Homecoming Concert. Most tickets distributed by the city were free, with attendees required to show proof of vaccination

Authorities in New York have been keen to push the idea of a comeback, with a focus on promoting civic engagement and tourism. Earlier this week, the city released a commercial featuring celebrities singing Billy Joel’s New York State of Mind at famous locations throughout the five boroughs.

More data from Italy. Patients in hospital with Covid-19 – not including those in intensive care – stood at 3,733 Saturday up from 3,692 a day earlier.

There were 40 new admissions to intensive care units, up from 26 on Friday. The total number of intensive care patients increased to 466 from a previous 455.