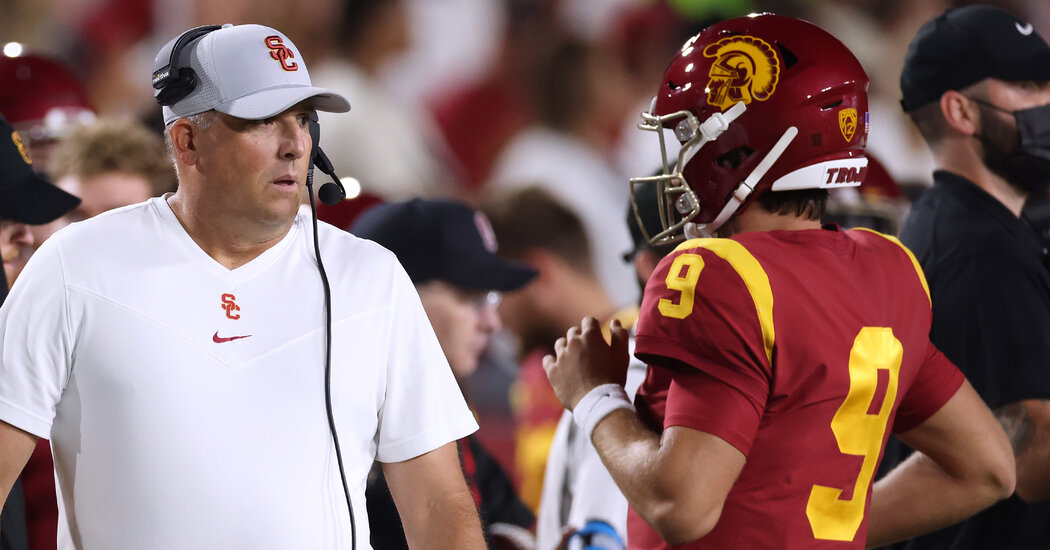 With the University of Southern California’s defense being gashed, its offense stagnant and its discipline lacking — the kicker was ejected on the opening kickoff — fans at the Los Angeles Memorial Coliseum showered the team with boos during a 42-28 thumping at the hands of Stanford, which entered Saturday’s game as a 17-point underdog.

“At the end of the season, see where we’re at,” he told reporters.

Wherever the Trojans are at the end of the season, Helton won’t be around to see it. He was fired Monday amid increasing fury from the school’s alumni and former players for whom Saturday wasn’t just a bad game, but another confirmation that the football program would never become a contender for a national title under Helton.

In fact, Athletic Director Mike Bohn, in announcing a national search for a new coach, said in a statement that the Trojans would be better off for the remainder of the season with Donte Williams, a 39-year-old cornerbacks coach who has never even served as a coordinator, as the interim head coach.

Bohn, who replaced Lynn Swann as the athletic director two years ago, said that despite adding resources for the football program since he arrived, it was clear even after two games — a win over San Jose State and the loss to Stanford — that U.S.C. was nowhere near becoming a national championship contender. “It is already evident that, despite the enhancements, those expectations would not be met without a change in leadership,” he said.

If Helton’s firing was a shock this early in the season, it is de rigueur for the Trojans, who have quite the history of bloodletting with football coaches.

Lane Kiffin was fired at the airport after being summoned from the team bus upon returning to Los Angeles following a defeat at Arizona State. Steve Sarkisian checked into rehab after getting fired in the middle of the season after repeatedly showing up drunk. And years ago, John Robinson returned home from Christmas shopping to find a message on his answering machine that he had been axed.

This decision, though, might have been made far earlier but for the whopping six-year contract extension Helton was awarded by Swann before the 2018 season — one that is expected to have paid him close to $5 million this season and runs for two more years.

The Trojans, who were carried to the Rose Bowl and the Cotton Bowl by quarterback Sam Darnold in Helton’s first two full seasons, have gone 19-14 since Helton signed the new contract. In last year’s pandemic-shortened season, the Trojans won their five conference games, but their hopes of sneaking into the College Football Playoff vanished when they were upset on their home field by Oregon in the Pac-12 championship game.

Helton never gained a foothold with U.S.C. fans, who were befuddled that the former athletic director Pat Haden — who like his successor Swann had been a star football player at the school — promoted Helton to interim coach after firing Sarkisian, and then gave him the permanent job. Haden had previously passed on another interim coach, choosing to not retain Ed Orgeron, who two years ago coached Louisiana State to a national championship.

Helton’s coaching staff was a revolving door, and each August he seemed to promise a more disciplined team. But even a rousing comeback victory over the conference rival U.C.L.A. last year was marred by Trojans taunting their rivals when the game ended — Helton falling to the turf trying to pull his players away.

The scene was a picture of a coach who did not have control of his team.

The cost of firing Helton will be considerable, presumably in the neighborhood of $15 million (the terms of his contract are not public because U.S.C. is a private school). But with a $315 million renovation of the Coliseum to be paid for in part through ticket sales, a considerable financial hit from the pandemic and declining attendance, there was also a cost to doing nothing.

On Monday, U.S.C. decided it was too much to bear.