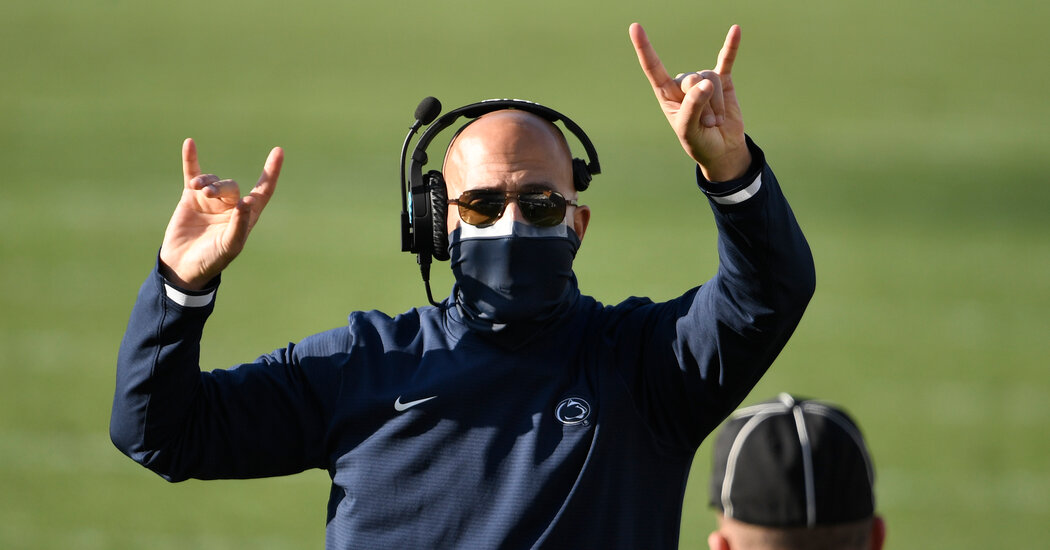 With all of the changes around college sports this year — players making money off their fame, new policies on transferring and an eased-up approach to the coronavirus pandemic — perhaps it seemed impossible to squeeze more tweaks into 2021.

This year is considered an “off-year” for rewriting the game’s rules, with the next wholesale review scheduled for 2022. For this season, changes could be made under limited circumstances, like when a modification would affect player safety or when a recent rule was not “achieving its intent.”

Here are some of the revisions that will take effect this season.

If you like the overtime drama of 2-point tries, more are on the way.

Beginning with the second overtime period, a touchdown-scoring team will be required to attempt a 2-point conversion; there will not be an option to kick for a single point.

If a game is still tied after two overtime periods, teams will have one-play possessions in which they may only attempt 2-point conversions from the 3-yard line.

Every round of overtime adds an average of 14 snaps to a game, and football officials believe that an earlier move to one-play possessions could reduce injuries.

“The concern, of course, is they want to get away from the five or six overtime games, where player safety really becomes an issue,” said Dennis Hennigan, the Atlantic Coast Conference’s supervisor of football officials.

The clock will only be adjusted in some instances.

Officials will only restore time to the clock if a video review by the officials happens with two minutes or less to play in the second quarter or five minutes or less remaining in the fourth quarter.

The change reflects concern over the pace and length of games, familiar worries for football leaders. By limiting when time should be added back, officials hope to shave seconds, or even minutes, from reviews. And they contend that the clock is a scarce factor for most of every game, only looming large in the waning minutes of a half.

There were an average of 2.1 stops per game for replay reviews during the 2019 season, according to Steve Shaw, the N.C.A.A.’s national coordinator of football officials. Last season, though, that figure increased to 2.85 stops a game. Shaw and others have pressed officials to limit replays to two minutes, but last season, he said, more than 200 reviews went longer.

Allowing for the possibility of technical troubles or close scrutiny of particularly consequential plays, Shaw said he was still urging officials to make decisions quickly.

“We want them to be accurate, but we want them to be very efficient,” he said. “If it’s a catch/no-catch, if it’s a line-to-gain, if it’s a score/no-score, if you have been there for almost two minutes and you can’t make a decision, that’s your decision. It’s not clear and obvious.”

Sound, video and lighting operators can now be called for unsportsmanlike conduct.

On Halloween last year, Texas lined up to attempt a field goal at Oklahoma State. But Cameron Dicker, the kicker, did not merely face uprights: He also faced a video board loaded with yellow lines that mimicked the goal posts.

That kind of action can now draw a 15-yard penalty. An “editorial change” to the rule book clarified that operators of audio, video and lighting systems are covered by the unsportsmanlike conduct rule and may “not create any noise or distraction that prohibits a team from hearing its signals or obstructs play.”

Shaw, who is also the secretary-rules editor for football for the N.C.A.A., did not cite the episode at Oklahoma State as the reason for the change and instead depicted it as a “proactive” move as more schools invest in flashy displays to improve the game day experience.

“The fear would be, you know, the visiting team throws a long pass and you dim the lights a little bit or something like that,” Shaw said. “The creativity of these people outstrips my thoughts on what they can do.”

Feigning an injury? The N.C.A.A. may look at it.

Just about everyone knows this play: A team is driving, gathering momentum, threatening havoc. Then a defensive player falls to the ground, time is called and the energy evaporates. Cue the jeers and the suspicions that maybe the injured player wasn’t all that injured.

The N.C.A.A. has not solved the scourge of feigned injuries. Indeed, football leaders acknowledge they might not ever solve it. But in a signal of its ongoing exasperation, the rules committee has set up a new procedure to discourage stoppages in play that carry the whiff of fraud.

The rules now call for schools or conferences to request postgame reviews of problematic episodes by the national coordinator of football officials. If the coordinator finds fault, he can refer the matter back to the offending school’s athletic director, who will determine any punishments.

“Hopefully the threat of your athletic director coming back in and saying, ‘I’ve got this issue,’ will stop this type of activity,” Shaw said. But he acknowledged the approach’s shortcomings — notably that an analysis after a game will do nothing to appease an opponent feeling aggrieved by the in-game act — and said officials could keep looking for another solution.

Last year, college football officials expanded the team areas by 10 yards at each end, to the 15-yard lines, to promote social distancing. Now they are splitting the difference and making a permanent change: Team areas will be marked at the 20-yard lines. Coaching boxes will run between the 20-yard lines, too.

After the experiment in 2020, coaches urged N.C.A.A. officials to keep the team and coaching areas bigger than in the past.

“It just gave them more room to move up and down the sideline, and it certainly gave the team more room,” Hennigan said.

Shaw said the coaches especially liked being able to come closer to the line of scrimmage when their team was in a red-zone situation.

But, he also said impishly, there was another benefit for coaches: “They can be down with the official a little further and stay in his ear or her ear.”

2022 could be an important year for the rule book.

N.C.A.A. officials already have a list of possible changes to consider next year. Shaw expects blocks below the waist to be discussed, as well as a possible simplification of how some penalties, like defensive holding and offensive pass interference, are enforced with, say, automatic first downs.

The foundations of the rules themselves might not be adjusted, he said, but officials could look to streamline the consequences for some violations.