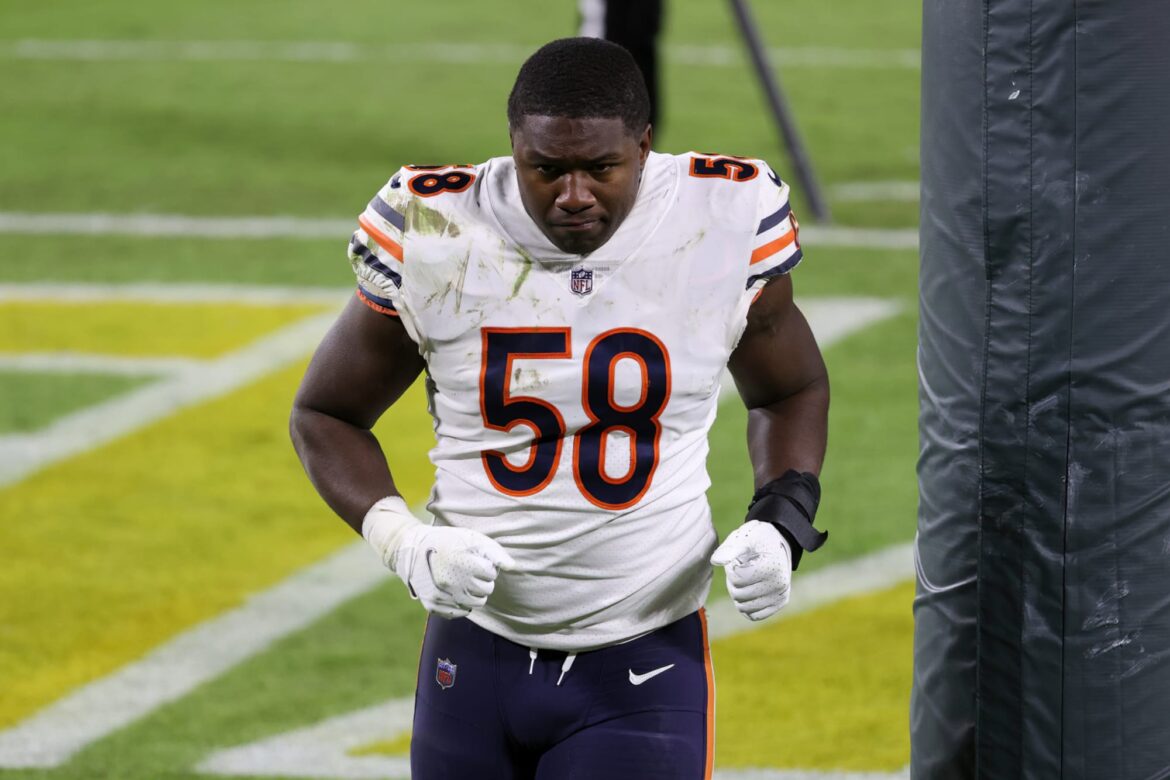 The Chicago Bears do not, cannot, and will not wish to modernize their way of doing business, and it doesn’t take one like Colin Cowherd to tell you that.

But on Tuesday, the Fox Sports radio host gave his thoughts on the recent drama surrounding the men of the Windy City and their disgruntled star linebacker Roquan Smith. Cowherd draws a parallel to the NBA Champion Golden State Warriors, adding that Chicago does not wish to modernize its approach to 21st-century football and instead is bent on staying in its roots from decades ago. Cowherd also mentioned other NFL franchises that have followed that method.

Normally, you take takes like this with a grain of salt. In this case, however, Cowherd is spot on. For some Bears fans, it seems nothing more like shock material and flat-out disrespect. Here’s the reality: the truth hurts.

This is not to say that the Chicago Bears should absolutely trade Roquan Smith or not even pay him. If you can get him at a reasonable price that matches his production and can help the team navigate through a strenuous salary cap, then you write the check and move forward.

But for a team that is coming off a 6-11 season and has so many holes to fill, it’s not a good idea to invest that much in a single player who is not a game-changer. It would be best to have players with gifted talent like Roquan Smith, but he cannot be the only player. It’s not just about collecting talent; it’s about building a team.

But back to Cowherd for a moment; if you go back through the 1950s till now, there are countless great linebackers that you could name for the Chicago Bears, but the same cannot be said for wide receivers. Have there been good ones? Yes. Brandon Marshall, Willie Gault, and Bernard Berrian are just a few. However, to Cowherd’s point, look no further than Allen Robinson and how that situation dragged out. Robinson, now with the Rams, seems to be enjoying himself.

That said, the Bears’ priorities lie elsewhere. The focus has largely been on defense, and the style of football can be best described, as YouTuber Jeff Schlegel refers to it as #BEARSFOOTBALL, which heavily prioritizes running the ball and excellent defensive play. That’s not a totally outdated system, but given how the modern league operates with passing the ball and quarterbacks making big plays, it has certainly taken a backseat, as have the Bears.

The Bears have only played in two Super Bowls in their history and boast one title, from 1985, a year that is still talked about today with a style of football that does not equate to the modern era. Since team president Ted Phillips has presided over this franchise, the Bears have made only six playoff appearances. Most of the success during that time was in 2006, a year that was mainly about the defense and special teams carrying the Bears to the Super Bowl, only for the championship dreams to be washed away in a rainstorm by Peyton Manning, Dwight Freeny, and the Indianapolis Colts.

The modern system features a quarterback, offensive tackles, and pass rushers getting paid top dollar. The Chicago Bears do business differently, and that’s a significant issue.

When it comes to pass rushers, the Bears have done it right. The price they paid for players such as Khalil Mack and Julius Peppers made sense, given their reputation. In the end, though, there wasn’t much to show. Mack’s addition got them a division title in 2018, and Peppers paid dividends in a surprise run to the 2010 NFC Championship, but again, no championships.

The quarterback position has been one of the roughest in Bears’ history. The results speak for themselves with examples like Cade McNown, Rex Grossman, and Mitchell Trubisky. Additionally, signings like Henry Burris and Kordell Stewart were largely ineffective. The trade for Rick Mirer from Seattle for a 1st-round pick can be argued as the worst trade in franchise history.

Additionally, it should be worth noting that in the 42 years that the NFL had a 16-game schedule, the Bears are the only franchise not to have a 4,000-yard passer. The record is held by Erik Kramer, who threw for 3,838 yards in 1995, a year in which the Bears went 9-7 and missed the playoffs following a late-season collapse.

The #Bears team holder for most passing yards in a single season is Erik Kramer in 1995 with 3,838 yards

Chicago is the only team in the #NFL to have never had a 4,000 yard passer in a season

There were 12 different 4,000 yard passers this season

The Bears were founded in 1920 pic.twitter.com/UZcd4AVo7j

Offensive tackle? At moments, it’s good, but as a whole? Not so much. Yes, Jimbo Covert in 1985 was a great pick, evidenced by his Hall of Fame bust, but again, as a whole, a bare cupboard. When it comes to wide receiver, you need only look back at the quote of Mushin Muhammad. “Chicago is where receivers go to die,” is what Muhammad said back in 2008. At first, that may have been overblown, but when you look at the crux of the quote, there is some reasoning behind it.

This is not to say Colin Cowherd was 100 percent spot on with every word he spoke, but most of his points are valid. The Bears’ priorities are not the right priorities. Whether it be the stadium and the fielding, or the lack of success they have had for much of this decade and even the 21st century, it’s just not good.

That’s not even considering how Soldier Field is extremely run down and has the lowest seating capacity in the league, despite the extensive renovation project that took place over two decades ago. The Bears have considered moving to Arlington Heights and immediately got clapback from the city, including Mayor Lori Lightfoot, who even proposed a potential stadium remodel. It looks good in images, but how can anyone forget what the turf appeared to be in the preseason game against the Chiefs? How is a remodel going to fix that?

Colin Cowherd is a sports analyst; more often than not, his takes will provide shock material. But this time, he got it right. The Chicago Bears look outdated, and until they modernize and get with the program, life will not change, and more and more personalities, including fans, will hurl criticism in their direction. It’s not as if the Bears care, given their track record and priorities.