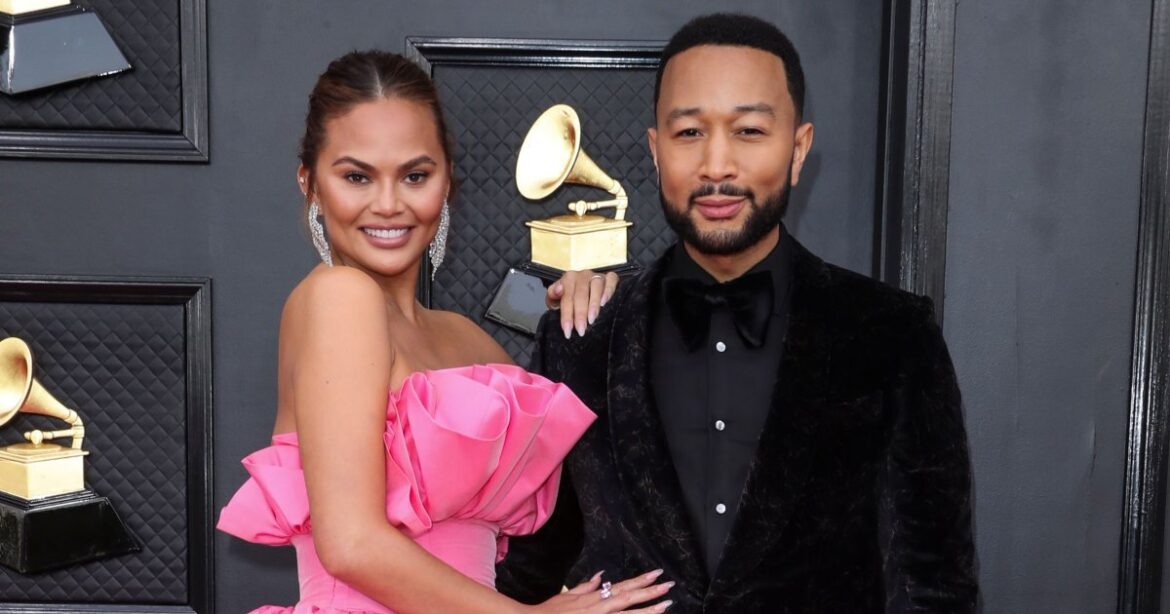 Going strong! Chrissy Teigen and John Legend have been going strong for nearly two decades since first meeting in 2006. The couple’s hilarious online personalities, adorable children, and superstar talents have helped them become absolute relationship goals. To learn more about Chrissy and John’s relationship, including their growing family, keep reading.

How Did Chrissy Teigen and John Legend Meet?

John and Chrissy were introduced in 2006 on the set of his “Stereo” music video, when the then-model was cast to play his love interest.

“I walked into John’s dressing room to meet him, and he was ironing in his underwear,” she told Cosmopolitan in 2014. “I said, ‘You do your own ironing!?’ He said, ‘Of course I do.’ I gave him a hug.”

The two hit it off on set and bonded over In-n-Out burgers that night. “I’m not going to lie. We hooked up,” she admitted.

Did Chrissy Teigen and John Legend Ever Break Up?

After their first night together, the pair were separated as John headed out to tour. Not in a committed relationship, though keeping in touch via texting, Chrissy remembers seeing photos of him on red carpets with different women on his arm.

“I let him be himself for a while,” the Cravings cookbook author told Cosmo. “I played it cool for a long time. Never once did I ask, ‘What are we?’”

The pair eventually made their relationship official, and she joined him on tour, but she recalls one night when things almost ended.

“I was on tour with him, and he’d gotten sick,” she later said. “He was feeling really bummed and stressed out. He was like, ‘I can’t be in a relationship right now.’ That lasted for one day. Literally, a day. I knew it came from a place other than us not working. It was the stress of him having to maybe cancel a show … I always joke, ‘Remember when you tried to break up with me?’ He’s like, ‘Yes, sorry. Big mistake.’”

How Did John Legend Propose?

After four years of dating, John popped the question during a Maldives vacation in December 2011.

“[The ring] was in my carry-on bag going through airport security,” he said during a 2013 appearance on Oprah’s Next Chapter. “Security wanted to look through my bag and they wanted to look in that particular box.”

“I was, like, ‘Oh, my God. I’ve hid it so well this whole time. Now as we’re just about to get to the Maldives she’s going to find out I have a ring in this box,” he added. “It’s going to ruin the surprise and I’ll have to get on my knees in the airport.”

The crisis was averted, and he proposed without a hitch over Christmas dinner.

When Did John Legend and Chrissy Teigen Get Married?

Two years later, a month after dedicating his smash hit “All of Me” to his then-future bride, the couple celebrated their wedding in Lake Como, Italy, on September 14, 2013, after legally getting married in a New York City courthouse.

“We are dumb and didn’t realize that our Italian wedding would not be recognized unless we had a real ceremony in New York City,” she told E! News at the time. “So, Irina Shayk was our witness – the most beautiful woman on earth!”

How Many Children Do Chrissy Teigen and John Legend Have?

John and Chrissy are proud parents to two children. They welcomed their first child, Luna Simone Stephens, on April 14, 2016. Two years later, their son, Miles Theodore Stephens, joined the family on May 16, 2018.

In August 2020, at the end of his “Wild” music video, the couple announced that they were expecting baby number three. After she suffered a partial placental abruption, their son Jack was delivered stillborn on on September 30, 2020.

On what would have been Jack’s due date, Chrissy shared behind-the-scenes photos of the filming of John’s “Wild” music video. “I was 10 weeks along and out of my mind happy,” she wrote. “I knew the video would take a bit to get together so I thought it would be cute to share our news with the world through the ol classic hand on belly trick at the end.”

Now, nearly two years after their loss, the couple spoke out about trying to grow their family once again.

“I’m balls deep in another IVF cycle to save as many eggos as I possibly can and hopefully make some strong, healthy embryos,” the mother of two shared in a February 2022 Instagram post. “I humbly beg you to stop asking if I’m pregnant because while I know it’s said with excited, good intentions, it just kind of sucks to hear because I am the opposite of pregnant!”

In March 2022, the “You Deserve It All” singer told People that the kids are excited to potentially have another sibling.

“They know we are trying, and they are excited,” he said.

On August 3, Chrissy announced via Instagram that she was pregnant with a rainbow baby.

“The last few years have been a blur of emotions to say the least, but joy has filled our home and hearts again,” she captioned a selfie in which she showed off her growing baby bump. “One billion shots later (in the leg lately, as u can see!) we have another on the way. Every appointment I’ve said to myself, ‘OK if it’s healthy today I’ll announce, but then I breathe a sigh of relief to hear a heartbeat and decide I’m just too nervous still. I don’t think I’ll ever walk out of an appointment with more excitement than nerves but so far, everything is perfect and beautiful and I’m feeling hopeful and amazing. OK, phew, it’s been very hard keeping this in for so long!”

Are Chrissy Teigen and John Legend Still Together?

Yes! The couple is very much still together as they are currently expecting another child together.