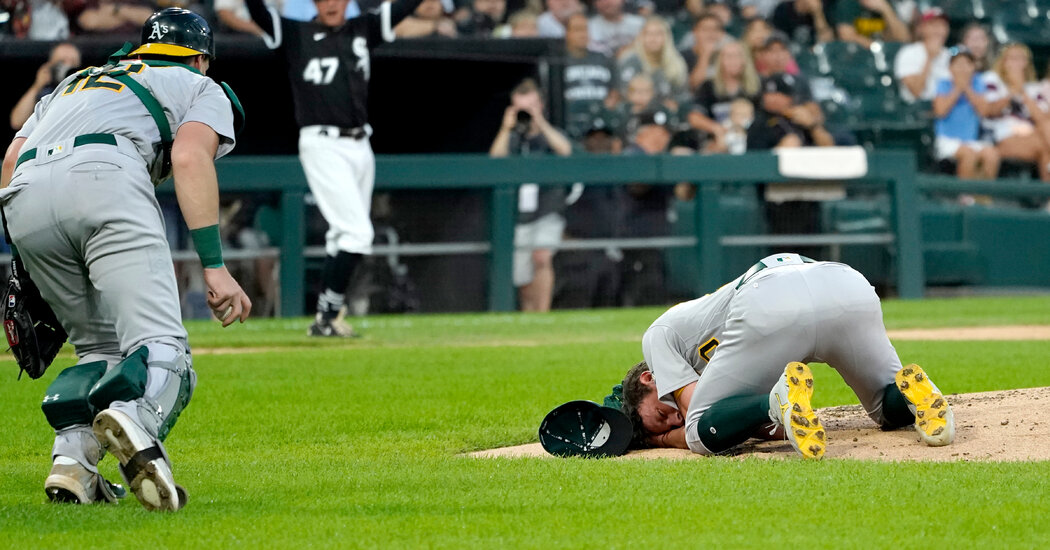 Chris Bassitt of the Oakland Athletics sustained a fracture in his cheek but was “conscious and aware” on his way to the hospital after being hit in the head by a line drive during the second inning of Tuesday’s 9-0 loss to the Chicago White Sox.

He was released from the hospital on Wednesday morning.

Bassitt, 32, immediately collapsed after being struck by the ball in the second inning, which came off Brian Goodwin’s bat at 100.1 miles per hour. But according to a tweet by the team, and a statement from Manager Bob Melvin, Bassitt, an All-Star this season, never lost consciousness.

“We don’t think the eye is a problem at this point,” Melvin said. “It felt like it was below it. He’s got some cuts. They had to do some stitches. He’s in a scan and we’ll know more about potential fractures or whatever tomorrow.”

Melvin did not take questions about the play, which came on the 101st anniversary of the death of Ray Chapman, an infielder for Cleveland who was struck by a pitch from New York’s Carl Mays and died a day later from his injuries.

The team released a statement on Wednesday saying that Bassitt had been released from the hospital and that he would need surgery for a displaced tripod fracture in his right cheek. An examination of his right eye revealed no damage to the eye or impact to his vision. The team also said that a CT scan revealed no further injury.

Bassitt’s representatives released a statement thanking the White Sox and Athletics for their concern. The statement said Bassitt would “be better than ever and back to doing what he loves soon.”

White Sox Manager Tony La Russa said Bassitt’s injury put a “dark cloud around that whole game.” Goodwin wished Bassitt well on Twitter, saying “Chris, you are in my prayers for sure brother.”

Bassitt has been having an outstanding season, with a 12-4 record and 3.22 earned run average in a major league-best 25 starts. It has been a continuation of his success from last year, when he had a 2.29 E.R.A. in the pandemic-shortened season and finished eighth in the American League Cy Young Award voting.

Players for both teams seemed shaken by the play.