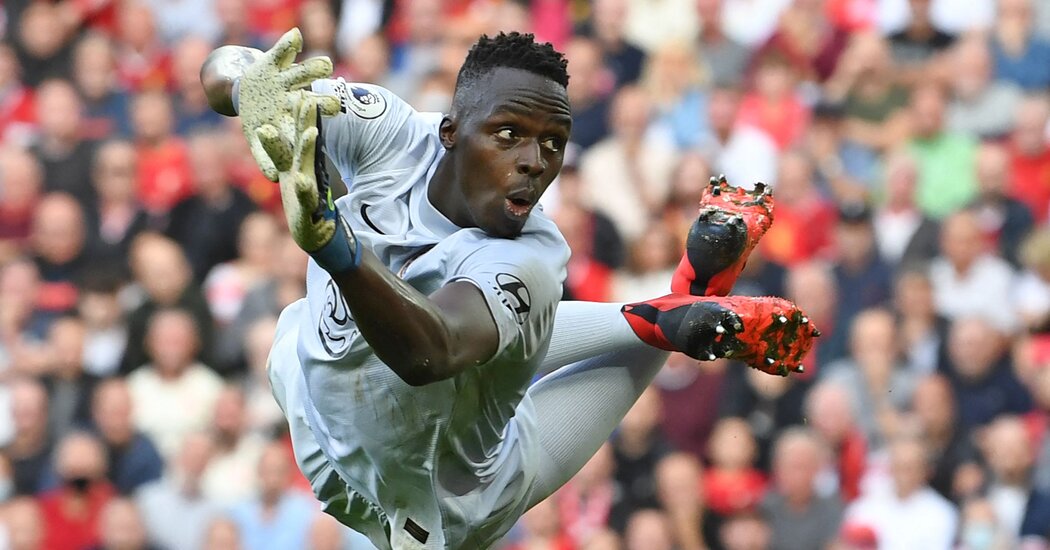 LIVERPOOL, England — Romelu Lukaku’s second half was not an especially glamorous one. There was a lot of running, darting into the slivers of space on either side of Liverpool’s central defenders, hoping for a ball that rarely came. There was a substantial amount of tussling and wrestling with Joel Matip, in particular, the two scrabbling for every inch of ground.

There were not, conversely, many touches: only 20 in all after halftime, not quite one every two minutes. There was only, in the entire span of that 45 minutes, one scoring chance, a single moment that Lukaku spent his entire night trying to conjure, a snapshot from just inside the penalty area. He caught it well. No sooner had it left his foot than Virgil van Dijk blocked it.

Such is the lot of the striker, of course: all of those moments of glory, as they wheel away, their arms aloft, adulation pouring forth upon them from the stands are the product of countless hours of unseen, unyielding and often underappreciated work. Every goal is reward for all of the effort silently expended. Lukaku, now in his second tenure at Chelsea, has been doing this long enough to be used to it.

Even then, though, Saturday’s 1-1 draw at Liverpool will have felt like an arduous evening. Circumstances had dictated that Lukaku spent much of the second half looking backward, rather than forward. Chelsea had been leading, through a clever header from Kai Havertz, with the clock ticking toward halftime when Reece James handled the ball on the goal line.

James was — eventually — sent off, Mohamed Salah converted the penalty, and Anfield smelled blood. From that moment, it was clear that Chelsea’s second half would be dedicated to holding out, not pushing on, and Lukaku, restored to the club for $135 million this summer, would endure an evening of silent toil.

Thanks to both his cost — Lukaku is now the most expensive player in soccer history in terms of cumulative transfer fees, at least until Kylian Mbappé joins Real Madrid — and that status, there is a natural inclination to assume that the final piece in the puzzle is also the most important, that this Chelsea team is now constructed for, and around, Romelu Lukaku.

His first display, at Arsenal last week, did little to disabuse anyone of that notion. He played there with all of the intent and menace of an avenging hero, scoring within 15 minutes of the start of his second spell in England; he may well have single-handedly robbed Pablo Marí, his direct opponent that day, of any scrap of self-belief for several years.

His second game, on Saturday, served as a reminder that there can only be a final piece if the puzzle is nearly complete. Lukaku was, through no fault of his own, an optional extra for much of this game, against one of Chelsea’s putative rivals for the title, and yet the club’s traveling fans still greeted the final whistle of a roar of approval.

Thomas Tuchel’s team had not won, of course, not in any strict, literal sense, but championships are built on moral victories, too, and this one was resounding. Chelsea — even playing at a disadvantage after James departed, in front of a baying crowd, against a team with one of the most potent attacking tridents in world soccer — produced a display of quite stunning control, and composure, and calm.

For much of the first half, Chelsea had frustrated its host, seemingly reducing the great green sprawl of Anfield — the open expanses in which Liverpool thrives — to nothing but a postage stamp. Every way that Jürgen Klopp’s team turned, there was a blue jersey. Chelsea has an inexorable ability to fill space, to turn every alley blind.

Liverpool had been growing a little rushed, a little ragged as it sought a way out of that vise, with van Dijk and Trent Alexander-Arnold at one point reduced to despairing loudly at each other over the width of the field: Van Dijk wanted his teammate to push forward; Alexander-Arnold could not see where he was supposed to go.

The penalty, and the red card, alleviated that pressure, but it redoubled Chelsea’s determination. Tuchel reorganized: Thiago Silva came on in the heart of defense, César Azpilicueta shifted out to the right, the indefatigable Mason Mount played as a holding midfielder and an attacking midfielder and an auxiliary right wing back, too.

Chelsea had lost N’Golo Kanté to an injury at the break, a third cause of regret, and yet his spirit seemed to suffuse his team. In 45 minutes in which Liverpool exerted a monopoly on the ball, in which Lukaku barely featured, it did not create a single, clear-cut chance. There were a handful of efforts from range, but no way through, no way around, no way out. Even Klopp, in the aftermath, could barely contain his admiration. “A man extra is not a massive advantage against a side with the defending skills they have,” he said.

It is this, as much as the threat of Lukaku, that makes Chelsea such a threat: the air of invulnerability, of redoubtable stolidity, that Tuchel has bestowed on his team in his eight months as coach. Chelsea has the firepower to see off the majority of the Premier League’s teams. But just as important is that it has the battery to keep out the great and the good.

It is easy, in the frenzy of the summer, as new players arrive to garland old teams, to believe that what matters is who can call upon the most talent, that titles are handed out to the sides with the most dazzling squad lists and the greatest expenditures.

But that is not quite how it works. There is another stage to the process: those resources have to be fashioned into a functioning unit, all of those gifted individuals crafted into a team. Lukaku may yet prove the final piece in the puzzle for Chelsea. What matters more, though, is that Tuchel had already put the rest of it together.