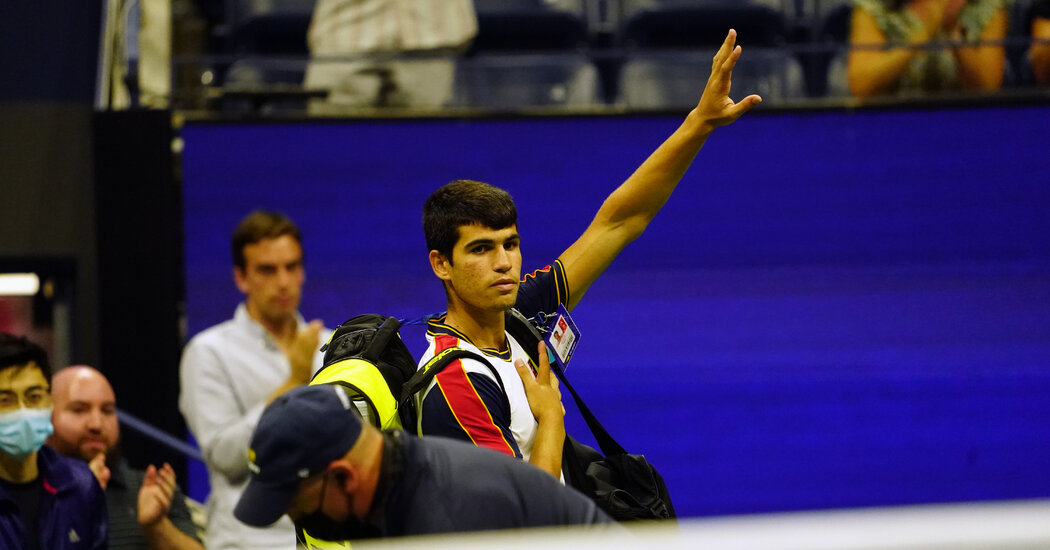 Carlos Alcaraz’s stunning run at the U.S. Open came to a sudden and surprising end on Tuesday night when the 18-year-old from Spain retired from his quarterfinal match against Felix Auger-Aliassime of Canada midway through the second set.

Auger-Aliassime took the first set, 6-3, and was leading 3-1 in the second set when Alcaraz approached the umpire and informed him that he was retiring from the match with an injury.

He said after the match he had an injury to a right upper leg muscle that he sustained from playing long matches in each of the previous two rounds. He said he started the match with pain and that it increased to a level that was unmanageable after the end of the first set.

“It’s a really tough to end a great tournament like this,” Alcaraz said. “I had no choice.”

Auger-Aliassime was as surprised as anyone, even though he had an up-close view of the Spanish phenom.

“I was expecting a tough battle,” a surprised Auger-Aliassime said of Alcaraz who, but for a handful of points, played the Canadian nearly to a draw in the first set. “I didn’t see it coming.”

Alcaraz came into the match after two five-setters, against the third-seeded Stefanos Tsitsipas and the German qualifier Peter Gojowczyk. Alcaraz wore bandages on the upper part of both of his legs but appeared to be moving well for most of the night. After the third game of the second set, Alcaraz had a brief examination with a medical trainer, but there was little other indication that his discomfort was serious enough that it might require him to retire from the match.

Alcaraz and Auger-Aliassime, 21, played a tight first set, with Auger-Aliassime having just a slight edge over Alcaraz, who has been nicknamed “the next Rafa” — a reference to his countryman, Rafael Nadal, the winner of 20 Grand Slam tournament singles titles.

Auger-Aliassime played a nearly flawless first set that included six aces. He also rushed the net 10 times and won eight of those points, a particularly aggressive strategy against a player known for hitting the ball as hard as anyone in the game.

Alcaraz was good but not great, lacing the occasional screaming winner down the line. But he never quite found the rhythm or the feel of the ball that he displayed in his best moments in this tournament, especially during his upset of Tsitsipas to announce himself to the world.

Alcaraz was one of three teenagers who made the quarterfinals at the 2021 U.S. Open. Leylah Fernandez, a 19-year-old Canadian, booked her spot to the semifinals on Tuesday when she beat Elina Svitolina of Ukraine, the fifth seed.

Emma Raducanu, 18, of Britain, will play the 11th-seeded Belinda Bencic of Switzerland in her quarterfinal match on Wednesday afternoon at Arthur Ashe Stadium.

Auger-Aliassime will play Daniil Medvedev of Russia, the No. 2 seed, in the semifinals on Friday. It is the first time he has made the final four at a Grand Slam tournament. Medvedev was a finalist at the U.S. Open in 2019 and a semifinalist last year. He lost in the finals of the Australian Open in February.