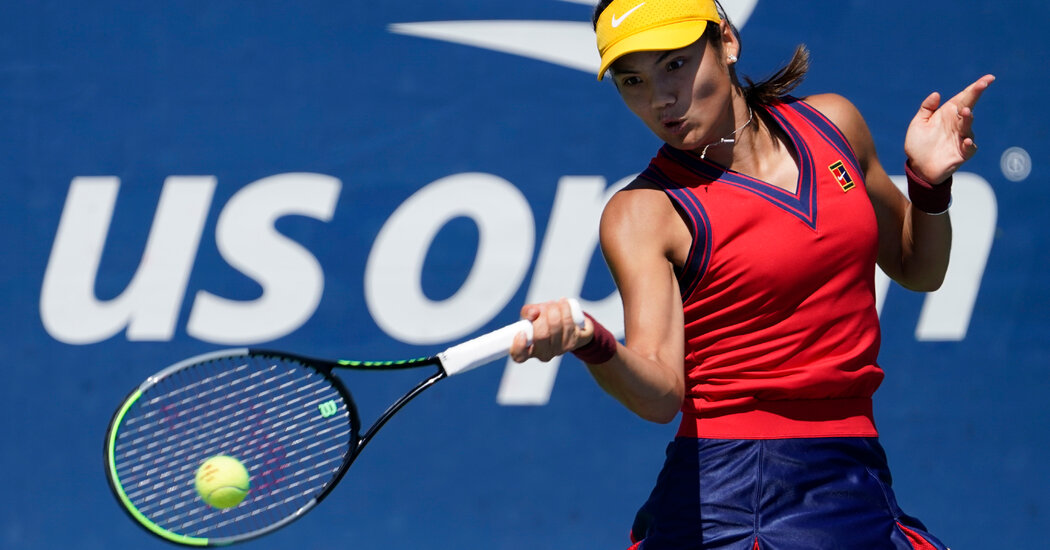 “I’m ready to play on anything, even the park at the back P17,” she said, referring to the outer practice courts in Flushing Meadows.

On Saturday on a bigger stage, the larger Court 17, Raducanu rolled on, beating Sara Sorribes Tormo of Spain in straight sets, 6-0, 6-1.

Alcaraz had also been ready. His battle against Tsitsipas on Friday lasted more than four hours. After letting Tsitsipas even the match at a set apiece, Alcaraz was down 5-2 and two service breaks in the third set, and Tsitsipas was bullying him around the court like a man playing a boy. It was a moment when most players, much less a teenager, would go away against the world’s third-ranked player.

Alcaraz did the opposite. He blasted forehands and backhands at the lines, and put Tsitsipas on the run chasing drop shots and topspin lobs as he drew even at 5-5. Soon Tsitsipas was talking to himself after nearly every point. A drop shot and a searing passing shot clinched the set in a tiebreaker for Alcaraz, whose trademark is a little unconscious hop he takes after he hits winners.

He windmilled his fist as the crowd exploded. Only Alcaraz’s coach, the former world No. 1 Juan Carlos Ferrero, stayed in his seat. Forgive him, he has been here before. Tsitsipas headed off the court for another of his signature toilet breaks, to a rousing round of boos.

The break worked for Tsitsipas, who reeled off the next six games to take the fourth set, 6-0. It was another moment when the teenager could have faded.

Instead, he called for an on-court massage, and on to the fifth set they went, trading service games until what seemed like an inevitable deciding tiebreaker as the crowd chanted “Carlos! Carlos! Carlos!”