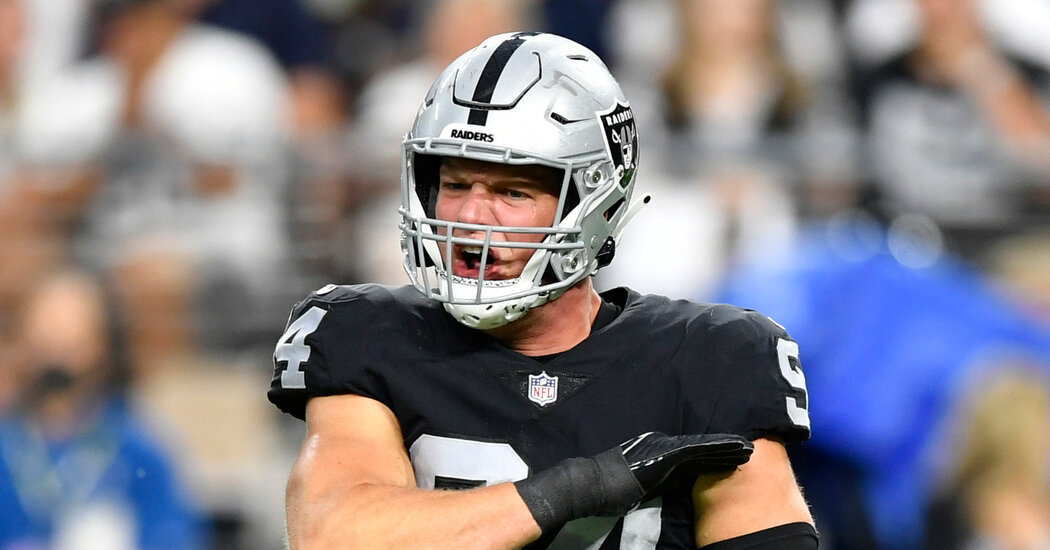 One of the most significant cultural milestones in the recent history of North American sports occurred with about as much pomp and circumstance as a shrug of the shoulders.

No openly gay player had ever competed in a regular-season game in the N.F.L.’s 102-year history until Sept. 13, when Las Vegas Raiders defensive end Carl Nassib strode onto the field just as he had done in every game of his six-year pro career.

Amid the pageantry of a Monday Night Football game, Nassib’s barrier-breaking moment took a back seat to the Raiders’ ceremonial opening of their new jet-black, $2 billion stadium to fans. The biggest acknowledgment of Nassib’s feat came from some attendants wearing his No. 94 jersey, not from any other orchestrated gesture.

On Sunday, he will do it again as the Raiders play the Steelers, with Nassib and the team making a concerted effort to take what he has achieved in stride and leaving it to others to discern and dissect whether a significant cultural shift has occurred in the league.

Experts on diversity and inclusion in sports said that was how it should be.

“I think the fact that it wasn’t a distraction is a very positive sign,” said Richard Lapchick, director of the Institute for Diversity and Ethics in Sport. “This is a sign of how much this has been accepted and that there was not a big fuss being made.”

On June 21, Nassib, came out as gay in a video posted to his Instagram account, saying he had internalized his sexuality as a secret for 15 years. The one-minute video, filmed outside of his home in West Chester, Pa., ignited a flurry of congratulatory messages on social media, including from his N.F.L. peers, celebrities and President Biden. Nassib’s jersey became the top-seller in the N.F.L. withing 24 hours, according to Fanatics, the league’s e-commerce partner.

Before Nassib, 15 players in league history identified as gay or bisexual, according to Outsports, a news website that covers L.G.B.T.Q. athletes and issues in sports. But unlike Nassib, they either announced their sexuality after their playing days had ended or had never appeared in a regular-season game.

Ahead of the season’s start, Nassib said he would donate $100,000 to the Trevor Project, a crisis intervention organization for L.G.B.T.Q. youth. He contacted he organization about two months before his Instagram post to discuss a plan, said Amit Paley, the Trevor Project’s executive director. In their conversations, Paley said Nassib wanted to raise awareness of L.G.B.T.Q. issues rather than just focus the spotlight on himself.

As Nassib’s post spread, traffic to the Trevor Project’s website increased by over 350 percent, and the organization received at least $225,000 in pledged donations by the end of that week.

“I think Carl really didn’t want this to be a big deal, and hopefully one day it isn’t a big deal when someone comes out,” Paley said in an interview. “But clearly it was a big deal to come out and be the first in this way.”

Things quieted as training camp began a month later. Nassib’s jersey no longer tops league sales, but it remains in the top five among Raiders players, according to Fanatics.

He declined multiple interview requests and spoke publicly only once before the first game. Against the Baltimore Ravens, Nassib played 44 percent of the defensive snaps in a rotational role, making three tackles. But in overtime, he collided with Ravens quarterback Lamar Jackson for a sack and forced a fumble that the Raiders’ defense recovered. The offense scored a walk-off touchdown to win the game, 33-27, two plays later.

Nassib, now on his third team since the Cleveland Browns drafted him in 2016, led the nation with 15.5 sacks at Penn State as a senior and won the Lombardi Award as the nation’s best lineman. He tries to remember things from every game, he said, but he especially savored the Monday night win.

“It was really special,” Nassib said in a postgame news conference. “I’m really happy that we got the win on the day that kind of made a little bit of history.”

His teammates did not mention Nassib’s historic role in the win. Coach Jon Gruden complimented only his performance on the field. Defensive end Maxx Crosby did, too, saying simply, “Carl’s a baller and I am proud of the guy.”

ESPN, the network which broadcast the game, also treated Nassib’s achievement subtly. It aired a 28-second video in the third quarter with clips of his Instagram video and a few pictures. On an alternate broadcast on ESPN2 featuring retired N.F.L. quarterbacks Peyton Manning and Eli Manning, the former N.B.A. player Charles Barkley appeared as a guest and wore Nassib’s jersey.

The nonchalant attitude of the coverage in some ways mimicked the reception of other male pro athletes who played their first games after coming out. The former N.B.A. player Jason Collins received modest applause from an opposing crowd when he entered a game for the Nets in 2014, 10 months after announcing that he was gay. But there was no other form of acknowledgment inside the arena, and Collins and his teammates downplayed the moment to the news media.

Robbie Rogers, the first M.L.S. player to appear in a game while openly gay, said things felt “normal” amid a typical atmosphere for a Los Angeles Galaxy game in 2013.

Nassib in August said his teammates had supported him since he came out. The Raiders did not make any players available for comment, but quarterback Derek Carr, who said his locker is only a few spots away from Nassib’s, said during training camp that he had not seen anything to dispute that.

“When he came in, I just like to watch, and not one person from my point of view has treated him any different,” Carr said.

Amy Trask, the former Raiders’ chief executive, said that fits tradition for a team that has historically embraced diversity. In 1997, she became the first woman chief executive in the N.F.L. Tom Flores, who is Mexican American, was the first Latino coach in the N.F.L. to win a Super Bowl, winning two with the Raiders, in the 1980 and 1983 seasons. The team also drafted Eldridge Dickey, the first Black quarterback taken in the first round, in 1968, when the Raiders played in the A.F.L.

Trask said she did not focus on the history she made during her first day or whether her colleagues would change the way they acted toward her. She is not surprised at how Nassib and the Raiders handled last week.

“This is an organization that has a track record of hiring without regard to race, gender or any other individuality which has no bearing whatsoever on whether one can do a job,” Trask said in an interview. “It’s very, very special, from my perspective, that Carl is a Raider.

“He went out and did his job, the way anyone would want any player to do his job,” she added.

If he continues to do the job well, said Wayne Mabry, arguably the Raiders’ most recognizable fan, Nassib’s sexuality would not change how he views the player. For nearly 30 years, Mabry, nicknamed, “The Violator,” attended almost every Raiders home game dressed as a pirate with black-and-silver face paint, leather boots and spiked shoulder pads.

It was a tribute he said was inspired partly by the team’s colloquial reputation as the “Bad Boys” of the league. It is irrelevant, he said, that a gay player is on a team with such a historically gritty perception.

“Warriors come in all shapes and sizes,” Mabry, 64, said. “It’s about what you bring to the table. As long as he can help us win, he’s a warrior to me.”