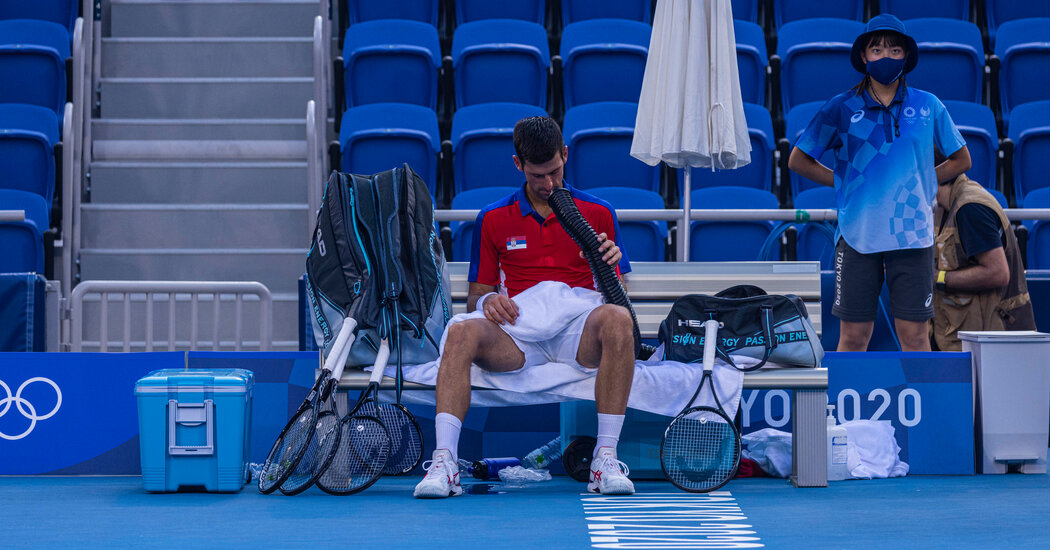 For months and months this year, at the most important tennis tournaments, it seemed as if Novak Djokovic was invincible, as if he simply could not be beaten.

With the biggest titles on the line, professional tennis threw everything it had at Djokovic for the first seven months of 2021. In Australia in February, he overcame a debilitating abdominal tear, snap Covid-19 lockdowns and the hottest player in the game. In Paris in June, he neutered the most dominating player a Grand Slam tournament has ever known and then staged an epic comeback to win the French Open title. At Wimbledon, he managed some of the best young players in the game as if they were hopeless children.

Arriving in Tokyo for the Olympic Games, he quickly became the toast of the athletes’ village, and the gold medal — perhaps two of them — appeared to be little more than a formality.

Nenad Lalovic, a fellow Serb and a member of the executive board of the International Olympic Committee, snagged the honor of presiding over the medal ceremony, certain that he would be delivering gold to a man who had become a deity in their homeland.

Djokovic’s first victim, Hugo Dellien of Bolivia, asked for Djokovic’s shirt as a souvenir and told him that merely being on the court with him had been a dream come true. After matches, Djokovic headed to the weight room for nighttime training sessions. Can he lose? the rising Spaniard Alejandro Davidovich Fokina was asked after Djokovic had dismantled him, 6-3, 6-1, in the round of 16 in Tokyo. “I don’t think so,” he said.

But invincibility in sports can be as fleeting as it is powerful. For Djokovic, who traveled to Tokyo to collect the fourth jewel in his quest for a Golden Slam — the four Grand Slam titles and the Olympic gold medal in the same calendar year — the magic dissipated during a shocking 11-game span that lasted roughly 45 minutes, as Alexander Zverev of Germany stormed back from a set down and conquered the king.

An hour later, Djokovic was back on the court, flubbing easy shots in the sweltering night during a mixed-doubles semifinal with Nina Stojanovic. They lost to a vastly inferior duo from Russia. When it was over, he sniffed back his tears and leaned on the shoulder of a teammate as he walked to the locker room.

The next afternoon, he flung his racket into the stands and whacked it against the net post as he failed to find the answers against Pablo Carreno Busta of Spain in the bronze medal match.

It all seemed so un-Djokovic, so not 2021. Djokovic has not played a competitive match since the Olympics and has remained largely silent, citing a need to rest and nurse an aching shoulder. That has left everyone to wonder which version of Djokovic will take the court this week at the U.S. Open as he tries to become the first man to win a Grand Slam since Rod Laver did so in 1969.

Making an argument against Djokovic is nearly impossible. The U.S. Open is played on hardcourts, the surface on which Djokovic has won 12 of his 20 Grand Slam tournament titles. Djokovic’s chief rivals throughout his career, Roger Federer and Rafael Nadal, have pulled out as they battle advancing age and injuries. The defending champion, Dominic Thiem, also withdrew because of an injury.

As in all Grand Slam tournaments, matches are best-three-of-five sets, which makes upsets less likely. At the Olympics, Zverev was on the edge of defeat and then got remarkably hot for 11 games, which was all he needed to win the match. Could he have sustained that level for another set? Perhaps, but history suggests it would have been very hard.

Djokovic is also likely to play several of his U.S. Open matches at night so that he can be featured in the prime time telecast. He is nearly unbeatable under the lights, when the afternoon heat that can be his kryptonite has subsided.

John McEnroe, the seven-time Grand Slam champion and ESPN commentator, said the only person who could beat Djokovic was Djokovic. Last year, Djokovic famously lost his temper in the round of 16, accidentally swatting a ball into the throat of a line judge, resulting in an automatic disqualification.

“I think he’s ready for the moment,” McEnroe said of Djokovic during a pretournament conference call on Tuesday.

And yet, after Tokyo, the idea that no one can topple Djokovic on the sport’s biggest stages is no longer absurd.

“For another player, it’s always good to see the vulnerability of the all-time greats,” said Paul Annacone, a former coach of Pete Sampras and Roger Federer. “It’s reassuring. But in this case, it is a very measured level of reassurance.”

Invincibility is a rare commodity in tennis. There are so many matches and so many tournaments in so many countries, it’s virtually impossible not to lay the occasional egg. Martina Navratilova probably came the closest to it in 1983, when she played 87 matches and lost just once. Steffi Graf won the Golden Slam in 1988, a campaign that included a scary, 34-minute 6-0, 6-0 triumph in the French Open final. Graf lost three matches that year, but never when it counted most.

As Djokovic begins his quest for perhaps the most hallowed achievement in the game, Zverev figures to be his most likely foe, especially with the memory of Tokyo still fresh.

His final against Russia’s Daniil Medvedev in Australia quickly turned into a three-set clinic. At Wimbledon, Matteo Berrettini of Italy won the opening set of the final but got no closer.

Stefanos Tsitsipas, the young Greek hope, came the closest to an upset, grabbing a two-set lead in the French Open final. He then lost his serve, and his nerve, early in the third set and never recovered.

Against Djokovic at the Olympics, Zverev displayed a rarely seen ability to neutralize Djokovic’s most dangerous weapon — the greatest service return in the history of the sport — with his twisting 130-mile-per-hour blasts. As the finish line drew closer, he swung even harder, unleashing strokes with a freedom that had long eluded him in the most crucial moments.

Last week, Zverev blitzed Andrey Rublev of Russia in the final of the Western & Southern Open, prevailing in 58 minutes.

Like everyone else, Zverev knows Djokovic is a heavy favorite, though perhaps not an invincible one. Djokovic will walk onto the courts in New York on rested legs that have not been taxed in nearly a month. Will he be fresh or rusty?

“It’s definitely going to be an interesting U.S. Open,” Zverev said after the Western & Southern final. “I know where I stand. I know how I am playing.”

The losses in Tokyo led Djokovic to take a hiatus. He said that he did not regret his journey to the Olympics, especially the opportunity to mingle and dine and stretch and celebrate with thousands of other athletes in the Olympic Village. After, though, he was exhausted, so he decided to skip the Western & Southern Open, which he had planned to play.

He said that he could feel the pressure and the expectations mounting and that he expected fierce challenges to come from Medvedev and Zverev, but that he was trying to approach the challenges one ball at a time.

“There is a slight difference in terms of what is at stake, but I don’t give it too big a significance on a daily basis,” he said.

After nearly a month without competition, Djokovic has most likely put Tokyo in his rearview mirror, chalking up the experience to extreme heat and the precariousness of the best-two-of-three format. But he may need a match or three to find his rhythm and recapture that aura of inevitability he carried onto the court all year, a weapon that can be far more potent than the special drinks and energy bars he packs in his tennis bag.

During her dominant run, Navratilova said, she could see in the eyes of her opponents before the first ball was hit that they knew how slim their chances were. The idea that the match might not go her way defied logic.

Amazingly, Djokovic has been at this level, or very close to it, twice before. In 2011 and in 2015, he won three of the four Grand Slam tournaments and dominated his chief rivals, Federer and Nadal. For long stretches, it appeared as though he might never lose.

And then, eventually, he did. Nothing lasts forever, in tennis or in life, even when it somehow seems impossible that it won’t.