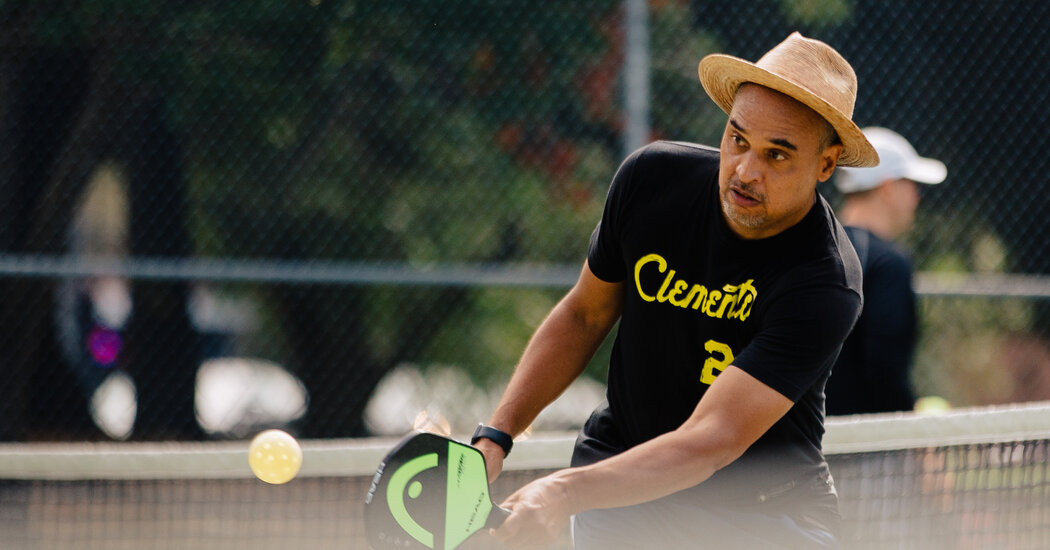 Allow me to begin with an admission. I haven’t exactly been a fan of pickleball, the sport that is sweeping America like thorny tumbleweeds blowing across the windswept plains.

I’ve always been jarred by the sound of it: Thwack!

Though pickleball, a hybrid paddle sport, is increasingly sharing space with tennis at many courts and clubs around the country, it has nothing like the feel of tennis or the booming sound of that fuzzy ball on the strings, struck just right.

For a lifelong tennis player like me, that high-pitched wail is an insult to the ears, the auditory equivalent of a root canal.

Then, there’s the aesthetic. The look and feel of pickleball. In contrast with the elegance of tennis, this sport appeared to me to be a simple something parents would dream up to keep the kids busy on a lazy summer day. Turns out that’s pretty much how the game began back on Bainbridge Island, Wash., in the 1960s.

Pickleball? Why not read a book, walk the dog, take a nap or just go ahead and play Ping-Pong?

I had intentionally and assiduously avoided it until last week.

Then pickleball sucked me in.

I went down to one of the game’s new meccas in my hometown, Seattle, a sliver of courts in the verdant park that wraps around the aptly named Green Lake. To describe it with better accuracy, these are three tennis courts that have been more or less commandeered by pickleball.

It’s a turf war that’s become common nationwide in recent years as the pandemic drove demand for both sports. Pickleballers are clamoring for respect, more resources and courts, creating a sensitive balancing act for parks and recreation departments around the country.

I naturally landed on one side of the battle. Way back when — read, during the administrations of Presidents Reagan and Clinton — I was one of the better players in the Pacific Northwest and often the best for my age division in Seattle. From ages 14 to 30, I won the city championships a half dozen times, sometimes playing matches or warming up on the three Green Lake courts.

On my pilgrimage to the transformed (pickled?) venue, I quickly found a shepherd. “So, do you want to give it a try?” asked Peter Seitel, a former owner and manager of a computer-engineering firm who is now known as the mayor of these courts. He’s an organizer, champion of pickleball and one of the locals trying to get the city to pay more heed to the sport.

I played my first games with Seitel, 68, as he taught me the rules and strategies. And I was hardly the only newbie greeted with open arms that day. Everywhere I looked, experienced players were guiding rookies with welcoming patience. The scene felt open and democratic compared with my experience with tennis, in which you often must prove you’ve got game before you can really be accepted.

There were intense games and relaxed ones. A 60-year-old woman held her own against a muscular 20-something. A fourth grader was just learning the ropes, moving from court to court to face off against people he’d never met. The racial and age diversity of the people playing pickleball felt refreshingly cool for a part of the city with a mostly white population and teeming with youthful tech workers.

Pickleball’s cozy community partly owes to the low barrier to entry. The time between learning the game and having fun with it is almost negligible. If you can play Ping-Pong and run eight feet in any direction, you’ll be rallying within a single day.

Seitel and I played a few games, and I immediately held my own. It was competitive but not so rigorous that I couldn’t wear my straw, wide-brimmed hat while playing. Don that hat during a tennis match and it would have fallen off during every other serve and sprint across the court.

Still, there were nuances. The scoring and positioning for instance. I’m used to hitting 120-mile-per-hour tennis aces, but the pickleball serve is a floppy underhand shot that barely leads to an advantage. During rallies, that pesky little plastic ball seems to have a mind of its own. One of the game’s biggest weapons is a soft knuckler that barely clears the net and is known as the dink. Not exactly my style.

Nicole Bideganeta urged me on. If Seitel is the mayor of the Green Lake courts, Bideganeta is the chief of staff. She can also talk a lot of smack to opponents and back it up so, of course, I wanted her as my partner.

In our second game, I got tired of dinking around. “I’m gonna poach, just like in tennis, and take this thing over!” I told myself.

This was not the smartest move. Or the safest.

When a floater came, I dashed for it, coiled, swung — and my racket collided with Bideganeta’s elbow, right on the funny bone. “Ouch!” She winced in pain. I felt embarrassed, like a bull in one of those ever-shrinking tennis-racket stores.

The score was tied, but we had to end that game. I got my partner some ice and a mango popsicle to soothe her pain.

Lesson learned. With its small court and swinging paddles, pickleball can be a little dangerous.

No sweat, Bideganeta assured me. “We’re going to get back out there. You’re not done yet!”

And sure enough, we returned, only this time with more focus. I didn’t want to let her down — dink, dink, curveball, smash to the feet. I was getting into it now.

Thwack! — that paddle-against-plastic sound I had thought was so obnoxious? Well, in the heat of the moment, I didn’t even notice it. What I did notice was that I couldn’t stop smiling as I played. And I saw way more smiles and joy all around me than when I’m playing tennis, where intensity and furrowed brows dominate.

We won that game, 11-0, which I learned is known as “a pickle” and isn’t easy at any level. “You’re just getting started,” my new partner said. Several other stalwarts surrounded us, urging me on.

I’m not giving up tennis. No way. A good match is like a flowing waltz — and a much more demanding workout. But I’m ready to make some room for pickleball in my life.