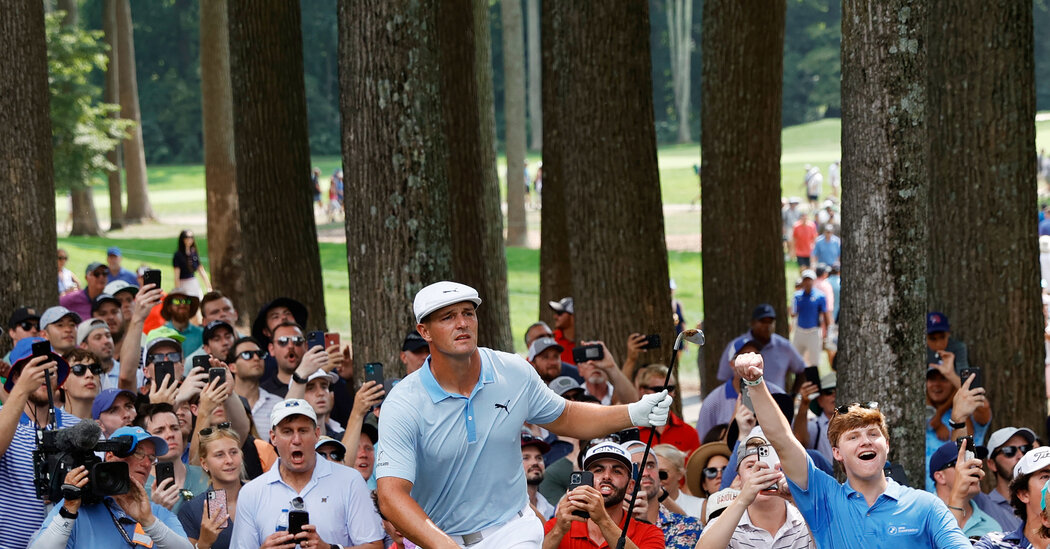 OWINGS MILLS, Md. — Bryson DeChambeau stood next to his golf bag on the first tee, contemplating which club to hit on the opening hole of Saturday’s third round at the BMW Championship. When he retrieved an iron rather than his powerful driver, a groan erupted from fans crammed into a grandstand overlooking the tee.

“We want the driver every hole,” a voice yelped.

“I know,” DeChambeau muttered. “I know.”

It has been tough for DeChambeau to make anyone happy the past two months, which is another turn of fortune in the capricious world he has inhabited since early 2020. Fittingly, at the up-and-down, topographically diverse layout of the Caves Valley Golf Club outside Baltimore, that has changed for DeChambeau in the last two days.

On Saturday, one day after a 12-under-par 60 had given him the tournament lead, DeChambeau was mostly enveloped by cacophonous cheers as he shot a five-under 67, in a round that included eagles on consecutive holes, five birdies, two bogeys and a double bogey. Patrick Cantlay, who began the day trailing by one stroke, shot a 66 to tie DeChambeau at 21 under for the overall tournament lead.

But more on that later.

First, to recap the topsy-turvy summer of 2021 for the divisive American golfer.

In June, leading in the final stages of the United States Open, DeChambeau, the defending champion, collapsed with a 44 on his final nine holes. He credited bad luck.

Within two weeks, DeChambeau split with his longtime caddie, Tim Tucker, who had carried DeChambeau’s golf bag for each of his eight PGA Tour victories. Days before his next major championship, the British Open, DeChambeau had to defiantly dispute accusations that he failed to yell “Fore” and imperiled spectators in the path of his long, and sometimes wayward, tee shots. Then, after a middling opening round at the event, he adamantly blamed his driver for his troubles, which brought a swift rebuke from a representative of his equipment sponsor, Cobra, who compared DeChambeau to an 8-year-old child. DeChambeau apologized.

Later that month, although he was one of four American golfers who had qualified for the Tokyo Olympics, DeChambeau had to withdraw after a positive Covid test. He said that he had not been vaccinated because he was young and healthy and had not wanted to take the dose away from someone who needed it more. His remarks were ridiculed.

All of this has been set against the backdrop of an ongoing social media feud with his fellow tour pro Brooks Koepka, which has been exacerbated by noisy, giggling fans in tour galleries who taunt DeChambeau with shouts of, “Let’s go, Brooks-y.”

Consider, for example, this interchange among spectators alongside the third green Saturday.

Listening to cheers after DeChambeau had birdied the hole, a young boy asked his father, “Is Bryson everyone’s favorite?”

In a few weeks, DeChambeau and Koepka will represent one-sixth of the 12-man American squad at the Ryder Cup, where tensions among teammates are heightened even when everyone is on good terms.

What does DeChambeau think of all that has transpired since June?

It is hard to say, as DeChambeau, in the weeks since he acknowledged that he had not received a Covid vaccine, has declined to speak with reporters covering the PGA Tour, except for the tour’s broadcast partners and a golf news outlet that pays him as a contributor.

On Saturday, DeChambeau began his round with a routine birdie on the par-3 third hole but then sank an eagle putt of 25 feet on the par-5 fourth and a 53-foot eagle putt on the par-4 fifth. DeChambeau made the turn at 30 and continued to cruise when he knocked his second shot to the par-4 11th hole to within a foot of the hole for another birdie and a four-stroke lead over Cantlay. But on his approach shot to the 12th, DeChambeau sliced a long iron into a bordering pond. (Broadcast microphones picked up DeChambeau blaming a smudge of mud on top of the ball for the mis-hit, although the television camerawork also seemed to show that DeChambeau’s club face was open, which would induce a slice.)

The miscue led to DeChambeau’s first bogey in 30 holes, and he followed that setback with another ball plunked into the water protecting the front of the par-3 13th hole. The error led to a double bogey. The large, raucous crowd that had been following DeChambeau seemed thunderstruck.

But DeChambeau rallied by draining a 10-foot birdie putts on the 14th and 16th holes. He also needed four shots to reach the 489-yard par-4 15th hole and made bogey. In the end, 67 was a splendid score considering that DeChambeau had hit only nine of 14 fairways. He was, however, second in the field in driving distance.

Cantlay, a measured, methodical player, made his charge more consistently, with an eagle, a birdie and seven pars on the front nine. Playing with DeChambeau and the reigning U.S. Open champion, Jon Rahm, Cantlay surged as the others in his group floundered, making birdies on three consecutive holes beginning with the 11th. It appeared that Cantlay was going to be the solo third-round leader until his tee shot on the 18th hole found the rough and served as the catalyst to a closing bogey.

Still, as he had been trailing by four strokes with seven holes remaining in the third round, Cantlay was asked afterward if he had been energized when DeChambeau deposited two balls in the water.

“No, I felt pretty much the same, just working on my business,” said Cantlay, who rarely shows emotion on the golf course. “I’m just trying to stay in my own little bubble out there. I feel like that’s the best way I can go about doing my thing and gives me the best chance to succeed.”