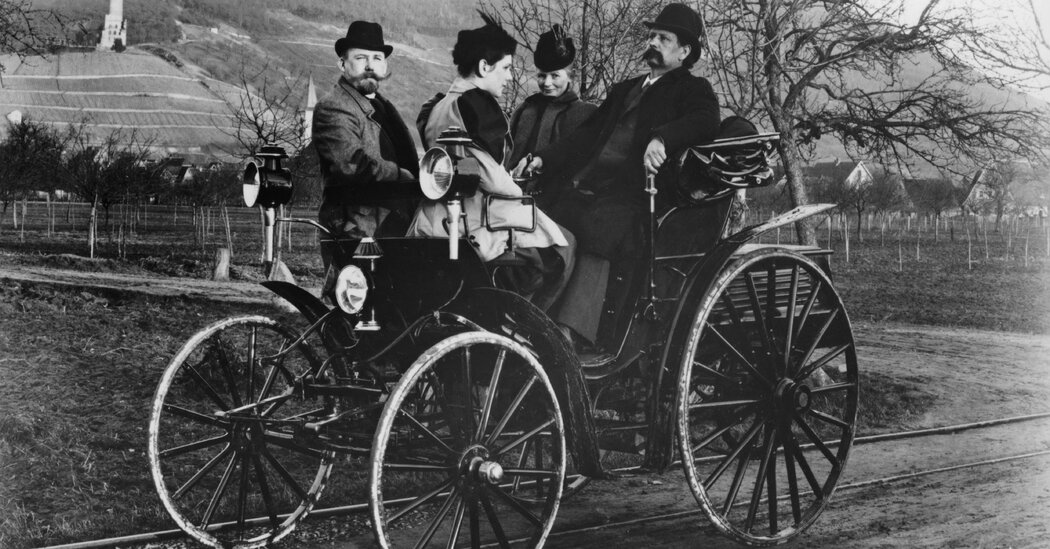 All this we learn until finally there was the historic moment: the bold pre-dawn exploit of one Bertha Benz, who in 1888 surreptitiously took her husband’s prototype Motorwagen and with her two sons and many drums of ligroin, the fuel de jour (gasoline was thought useless and was dumped into swamps), drove 65 miles from Mannheim to Pforzheim to see her mother. And out of this bold act of feminine resolve came the automobile itself, the true star of the story.

Naturally, this being a comprehensive history, we learn much about Henry Ford and mass production and the Model T, but then of how General Motors cunningly realized that while Ford could make cars, G.M. could sell them (their brands being Chevrolet, Cadillac, Pontiac and one, Buick, from a company that previously made bathtubs) by lending would-be buyers the money to pay for them. The General Motors Acceptance Corporation helped put millions of Americans on the road, helped create the suburb and the commuter and, rather more insidiously, helped put many of those millions on the road to near-permanent indebtedness, as other millions remain today.

The hinge-point of the book is Standage’s description of the memorably prescient Futurama exhibition at the 1939 New York World’s Fair, where the designer Norman Bel Geddes (who also drew up plans for a nine-decker amphibious passenger aircraft with 26 engines and a ballroom) offered his startling vision for “the shape of cities in the automotive era,” with people and cars separated safely and in a fashion that would allow the automobile (“in no way responsible for our traffic problems”) to dominate the economic vibrancy of the nation and allow for the freedom of its citizens to go anywhere, anytime.

Shopping malls, gas stations, drive-ins — and redlining, Robert Moses, urban blight, white flight — all were born of this utopia turned dystopia, and Standage writes with a masterly clarity before turning his attention, as need dictates, to the topic of Our Automotive Future.

I wish he hadn’t. This is not to say that his writing here is any less vivid; it is rather that he writes of a dreary world of self-driving cars and Ubers everywhere and drone deliveries and electronic highways and artificial intelligence and things that may well be around the corner or the block but that fogies like me wish would just go away. I prefer to recall the lasting charms of the wheeled age, as when I traveled in 1985 to the British-administered South Atlantic island of Tristan da Cunha on a cargo ship that had a car in its hold and a formal proclamation to be made to the 220 inhabitants: that since this car would now be the second on the island and the two vehicles had the potential to collide, all vehicles on Tristan’s single roadway henceforth must, by order of Her Majesty the queen, drive on the left.

Telling histories via a selection of particular objects — maps, items in a museum, uniforms — is a current publishing trope. Standage himself had considerable success with “A History of the World in Six Glasses” over a decade ago. Now a prominent British horologist, David Rooney, has entered the lists with his abundantly clever “About Time,” fashionably subtitled “A History of Civilization in Twelve Clocks.” His notion is that time-noting instruments of one kind or another (his impartial passion for such items, sundials to plutonium-fueled clocks, he recounts quite touchingly) have been central to human endeavor, and he illustrates the power of such influence by scores of well-curated examples.