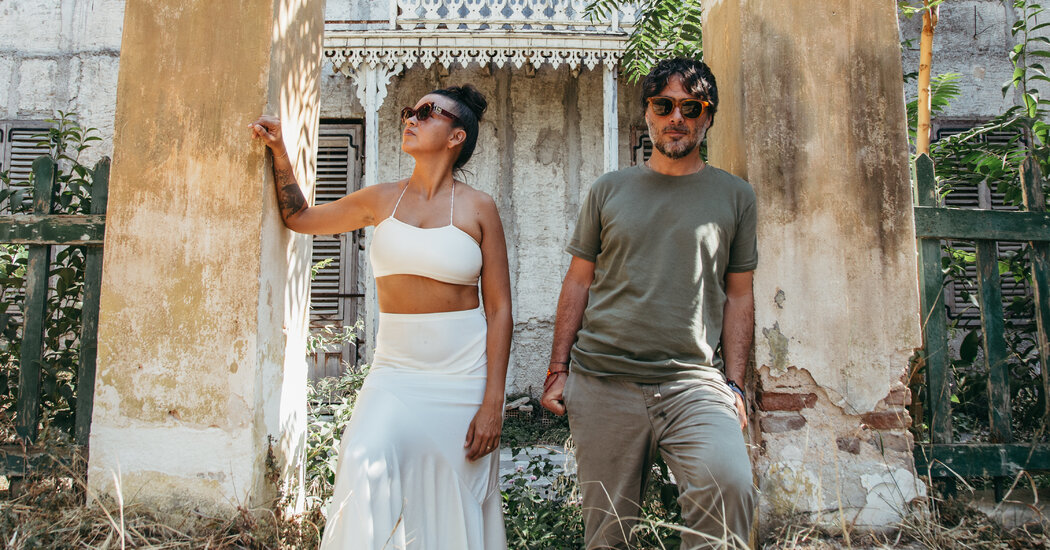 When Bomba Estéreo, the Colombian duo of Simón Mejía and Liliana Saumet, had nearly finished recording its sixth studio album, “Deja,” the group took part in an age-old ritual: a pagamento, or payment. It’s a ceremony “to pay back what you have taken from the Earth,” Mejía explained in a video interview from his home studio in Bogotá.

At a sacred site in the Sierra Nevada of Santa Marta — snow-capped mountains on Colombia’s Caribbean coast that are still home to Indigenous groups — Bomba Estéreo spent a night making offerings and sharing profound conversation with a mamo, a shaman of the Arhuaco people.

As the ceremony was ending, Mejía asked the mamo, Manuel Nieves, to visit Saumet’s studio, at her home in Santa Marta, and to record a message for the public; it became the final words on the album. Speaking in Arhuaco, the mamo calls for preservation of the endangered environment, warning about climate change and concluding, “On this Earth, our duty is to take care of Mother Nature.”

Over the past 15 years, the combination of Mejía’s music and production and Saumet’s voice, melodies and lyrics have brought Bomba Estéreo major hits across Latin America, like “Soy Yo,” a call for self-empowerment. and “To My Love,” both from the 2015 album “Amanecer.”

From its beginnings, as a solo studio project for Mejía, Bomba Estéreo set out to fuse electronica with a Colombian heritage that encompasses Indigenous, African and European recombinations. “Colombia is all about mixture and diversity — we have it in our DNA,” Mejía said. “We’re not one thing. We’re many things at the same time in this small, crazy and conflicted territory.”

For Bomba Estéreo, he said, “The concept was trying to make an electronic music that was original, that wasn’t a copy of the electronic music that was made in London or New York or Detroit or Berlin. It was kind of an identity search. OK, if we, as Colombians or Latin Americans, are going to make electronic music, how would it sound? Our dance music is cumbia, is champeta, is salsa, is merengue, is all the tropical and Caribbean and folk music. And the international dance music is electronic music. So what happens if those two worlds that come from dance — that connection with the ritualistic — can come together because they have the same root?”

Mejía met Saumet at a party — “a really, really bad party,” Saumet recalled — and later invited her to sing and write at a recording session; their collaboration was forged when she finished a song, “Huepaje,” in 45 minutes. Her untrained voice had the biting tone of traditional Colombian styles, but she had also grown up on hip-hop and could write both raps and melodies; girlish but assertive, she easily cuts through Mejía’s electronic constructions.

In Bomba Estéreo’s early years, Mejía traveled around Columbia to learn about regional styles. He worked on a documentary on the drumming of San Basilio de Palenque, a village founded in the 17th century by escaped African slaves, and set up a recording studio there; he delved into the carnival music of Barranquilla, and he sought out old LPs of local music. Meanwhile, the group’s studio expertise expanded rapidly.

With each album, Bomba Estéreo’s music has grown richer, bolder, more intricate and more idealistic. “Deja” is simultaneously earnest, spiritual, euphoric, rooted and high-tech. “We’ve grown older and we’ve learned more about ourselves, about music, about the world. So you kind of develop more layers in life,” Mejía said.

Since the 2010s, Bomba Estéreo has been strongly committed to environmentalism. With songs like “Siembra” (“Sowing”) and “Dejame Respirar” (“Let Me Breathe”), with benefit concerts, with speeches and with a 2020 documentary film, “Sonic Forest,” Bomba Estéreo has spoken out against deforestation, mining and pollution. Recording under the name Monte, Mejía released a solo album in 2020, “Mirla,” that put nature sounds at the center of instrumental tracks.

The songs on “Deja” began emerging while Bomba Estéreo was touring Europe in 2019. On the bus, the guitarist and co-producer José Castillo and the percussionist Efraín (Pacho) Cuadrado started coming up with rhythms and guitar licks that would end up in new songs. After the tour, Mejía returned to Bogotá, building studio tracks and sending them to Saumet, who was in Canada with her Canadian husband and their children. Saumet brought in a longtime friend, Lido Pimienta, a Colombian songwriter who had moved to Canada in her teens; Pimienta was a singer, songwriter and arranger on “Deja”; Saumet has also been writing a solo album with her.

“I’m her filter,” Pimienta said from her studio in Toronto. “Liliana is a fountain of words and singing. She is very free, and I’m more, like, methodical. She always tells me, ‘You’re my nerd,’ and I’m like, ‘You’re my hippie.’”

Bomba Estéreo also invited other singers for the album: the Cuban duo Okan, the Mexican songwriter Leonel García and the Nigerian Afrobeats singer Yemi Alade. Cuadrado, the band’s percussionist, takes over lead vocals on “Tamborero,” a song that harks back to Afro-Colombian chants amid the electronics, as it celebrates the drums at the core of the music.

In January 2020, just before the pandemic lockdown, Bomba Estéreo and guest musicians gathered for three weeks of recording at Saumet’s home on the coast of Santa Marta, with the beach out front and a jungle and mountains behind it. The sounds of monkeys, birds and splashing Caribbean waves, recorded on the spot, surface often throughout the album.

“The really cool thing about this album is that we finished it all together,” Mejía said. “In general, it’s everyone sending things on the internet. But I had always seen Bomba as a community effort, and finishing it together was kind of like having this hippie community, with everyone sharing energy.”

The songs on “Deja” are grouped under elements: water, air, earth and fire. But that framework is open enough to encompass songs offering ecological pleas, dance-floor bliss, glimpses of mystical revelation and thoughts about loneliness, depression and healing.

“Agua” (“Water”) opens the album with Saument, Pimienta and Okan harmonizing on a traditional-sounding chant, joined by a Colombian beat — a bullerengue — along with electronic blips and bass lines, and birds recorded in Santa Marta. The lyrics equate a woman’s body with an endangered planet: “Give me water, give me wind and I will survive,” Saumet sings.

“Tierra” (“Earth”) uses a six-beat rhythm and plinking marimba patterns, drawing on Afro-Colombian styles from the Pacific Coast, to lament rapacious exploitation of natural resources. “The rivers were drained, the mountains were left empty for coal,” Saumet sings. “We are standing in the middle of the forest, watching its extinction.”

Yet the album also has more lighthearted moments — like the Afrobeats-tinged “Conexión Total,” with Saumet and Alade wanting someone to go offline and get physical — and more introspective ones. The title track, written with Pimienta, is about trying to live through depression and leave it behind.

“Lido and me, we both have a personal story with depression,” Saumet said. “When we finished that song, we started crying together. Now we can hear the song and know other people can be touched. This is what music and art is. Something that was really awful in that moment, or was super strong, can be now something inspiring for other people.”

At its best, Bomba Estéreo’s music hints at what Mejía calls “an Indigenous futuristic kind of civilization,” he said, and added: “Obviously we’re not going back to living as an Indigenous tribe lives in the Amazon. We already live in cities, and we have computers and phones and whatever. But we can find a level of mixing our technology and respecting and being with nature. It’s like having one bare foot in the roots, while the head is looking to the future.”