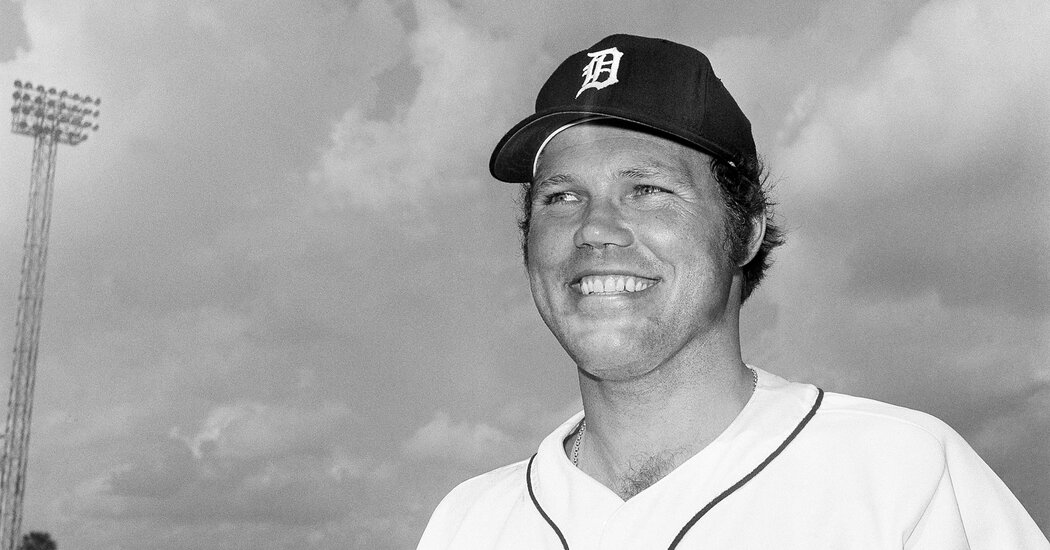 Bill Freehan, the 11-time All-Star catcher who guided the Detroit Tigers’ brilliant pitching duo of Mickey Lolich and Denny McLain as the Tigers defeated the St. Louis Cardinals for the 1968 World Series championship, died on Thursday at his home in the village of Walloon Lake in northern Michigan. He was 79.

His death was announced by the Tigers. His wife, Pat, revealed in 2018 that he had dementia, and he had been in hospice care.

A Detroit native, Freehan spent his entire 15-year major league career with the Tigers. They signed him for a $125,000 bonus in 1961 out of the University of Michigan, where he caught for the baseball team and also played football. He made his debut with the Tigers in September 1961, was assigned to their minor league system and was a durable centerpiece for Detroit from 1963 to 1976.

Freehan finished third in balloting for the American League’s Most Valuable Player Award in 1967, when he hit 20 home runs and drove in 75 runs for a Tigers team that, along with the Minnesota Twins, finished one game behind the pennant-winning Boston Red Sox.

In the balloting for M.V.P. in 1968, Freehan was the runner-up to McLain, who won 31 games in the regular season. Freehan hit 25 home runs and drove in 84 runs that year.

“Bill was our leader, and we had a lot of independent guys, but he got everyone to come around,” McLain told The Detroit Free Press upon Freehan’s death. He said that Tigers pitchers were “supposed to throw the ball from the same position every time, and he knew if you were off and could then keep you in one place.”

Freehan, he added, “got the most out of a pitcher that you could get.”

He was remembered especially for a key play in Game 5 of the 1968 World Series, when the Tigers were trailing the Cardinals by three games to one. The Cardinals’ Lou Brock tried to score from second base on a single in the fifth inning with St. Louis leading, 3-2.

Freehan, 6 feet 3 inches tall and 200 pounds, stood his ground. He grabbed an outstanding throw from the left fielder Willie Horton, blocked home plate, leaned over and tagged Brock, who had come in standing up.

“I expected him to slide, and when he didn’t his foot left spike marks in the dirt about a half-inch from the plate,” Freehan said after the game.

Brock insisted he had touched the plate before the tag was applied, but this was long before instant replay.

The Tigers, with a lineup that also included the future Hall of Fame outfielder Al Kaline, rallied for a 5-3 victory in Game 5 and then captured the final two games of the World Series.

Freehan caught a foul pop-up by the Cardinals catcher Tim McCarver for the final out of Game 7 and ran to the mound to celebrate with Lolich, who had pitched his third complete-game victory of the Series. McLain was 1-2.

The Freehan-Brock encounter at home plate and the joy at the pitcher’s mound were captured in photos that have endured for Tigers fans.

William Ashley Freehan was born on Nov. 29, 1941, in Detroit, to Ashley and Helen Morris Freehan. His father was a sales representative for a company that installed insulation.

He grew up in Royal Oak, a suburb of Detroit, but his family moved to St. Petersburg, Fla., when he was a teenager and he attended high school there. He set a record for Big Ten baseball that still stands when he batted .585 for Michigan in 1961; he also played tight end for the football team.

He continued to take classes during his baseball off-seasons and received a bachelor’s degree from the University of Michigan system’s Dearborn branch in 1966.

Freehan retired from baseball with 1,591 career hits, 200 home runs and a career batting average of .262. He caught 1,581 games for the Tigers and occasionally played first base.

He later coached the Michigan baseball team from 1990 to 1995 and was a coach and a catching instructor in the Tigers’ organization and a color commentator for Tigers and Seattle Mariners games.

In addition to his wife, Patricia O’Brien Freehan, his survivors include three daughters, Corey, Kelley and Cathy, and a number of grandchildren.

“We started out as rookies and developed the same mind,” Lolich told The Free Press on Thursday. “He knew what I wanted to throw, and I rarely had to shake off his sign. We became one mind working together.

“He was our leader on the field and caught nearly every day. His mind was always in the game.”