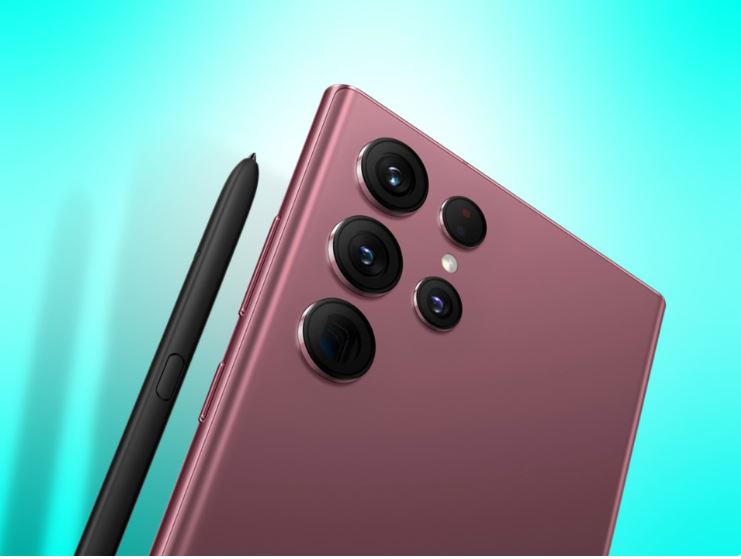 Modern smartphones feature multiple finger touch input, but only a handful have proper support for latency-free styluses. There aren’t many options for those who like to sketch, draw and take notes, but fortunately, the technology received several upgrades in the past few years, making them ideal for all sorts of work and entertainment.

In this guide, we collected some of the best smartphones with stylus support in 2022. We have a few high-end devices, a single foldable, and two few mid-rangers to complete the list. All of these devices are ideal for taking notes, and drawing, although the more premium models offer the best experience when it gets to latency-free input and functionality. 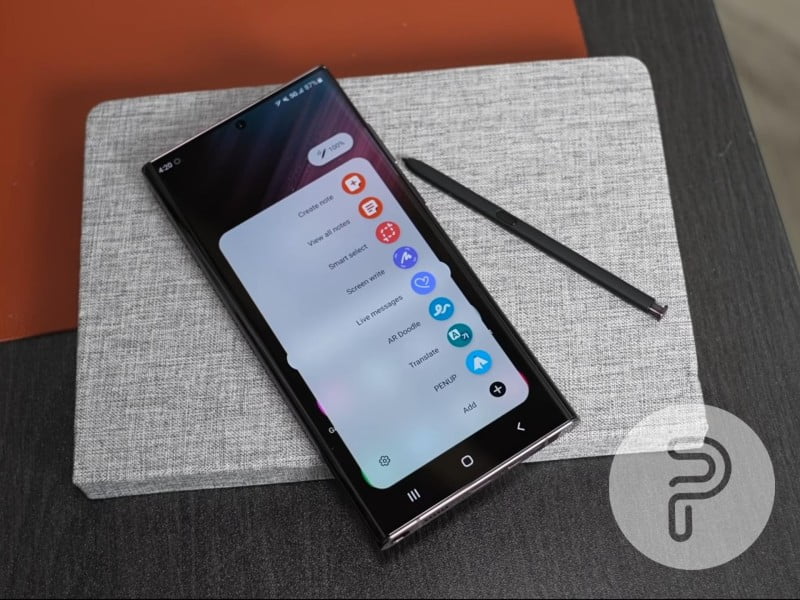 The Samsung Galaxy S22 Ultra is the highest-end flagship on this list, and it’s powered by the premium Snapdragon 8 Gen 1 chipset (in North America). It’s capable of much more than just taking notes, and it has an excellent array of cameras on the back, on the front, and it has a long-lasting battery. It has everything you need and is one of the best devices in 2022. One of the main reasons this phone stands out, however, is due to the fact that it has excellent support for the included stylus – the S Pen – which is safely stored inside the dedicated slot on the bottom. You can watch our review video of the Galaxy S22 Ultra.

The device has a massive 6.8-inch Dynamic AMOLED 2X panel with 120Hz, and it’s one it’s protected by the latest Gorilla Glass Victus Plus panel. It’s one of the best and most responsive displays, and it’s currently one of the best if you want to take notes, draw or do any other pen-related activities. The Galaxy S22 Ultra packs at least 128GB of UFS 3.1 storage and 8GB of memory, but it’s also available in different configurations ranging from 128/256/512GB and even a 1TB model. Everything above the 256GB model also receives 12GB RAM as a bonus.

There are multiple sensors on the back, including a 108MP f/1.8 primary sensor, a 10MP f/4.9 periscope telephoto sensor capable of 10x optical zoom, a 10MP f/2.4 standard telephoto providing 3x optical zoom, and a 12MP f/2.2 sensor for all of those ultrawide shots. The selfie shooter is no joke either; there’s a 40MP f/2.2 sensor, allowing you to capture better photos and video in low-light environments. When it gets to longevity, the phone has a 5,000 mAh battery and supports 45W fast wired charging. 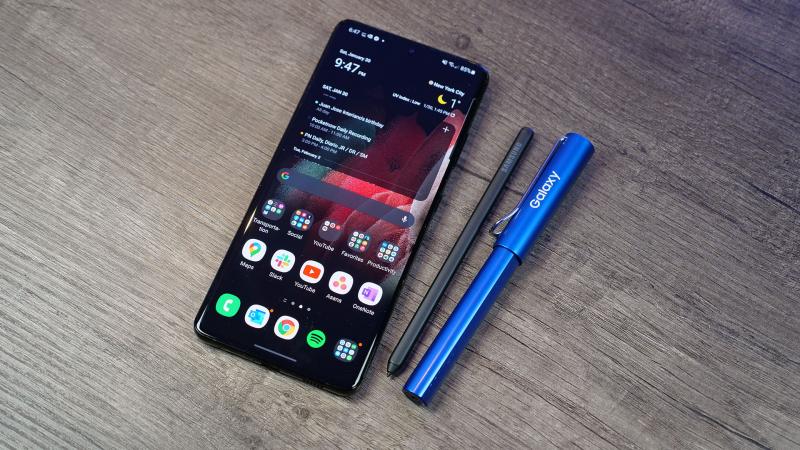 The Galaxy S21 Ultra might be a year old at this point, but it’s still an excellent alternative if you want to save some money, and you don’t need the “latest and the greatest”. It supports all of the S Pen functionalities you can find in the current Galaxy S22 Ultra and previous Galaxy Note series of devices, and it’s powered by a still very capable Snapdragon 888 chipset, paired with 128GB base storage and 12GB of RAM.

It has a large 6.8-inch Dynamic AMOLED 2X panel with 120Hz refresh rate, and it’s an excellent choice for artists and note-takers due to the large size, color and responsiveness. The phone is also receiving timely updates from Samsung, and it’ll be updated in the coming years to support the latest Android OS versions and security patches.

On the back, it sports a 108MP primary, a 10MP periscope with 10x optical zoom, a 10MP standard telephoto with 3x optical zoom, and a 12MP ultrawide camera. Like on the Galaxy S22 Ultra, you’ll also find a 40MP selfie shooter on the front punch-hole. The phone can last a comfortable full-day, depending on your usage, thanks to the 5,000 mAh battery. It supports 25W wired charging, helping you top up slightly faster.

The bottom line is that if you want to save money, this is one of the best high-end devices you can pick up today for a fraction of what it used to cost. 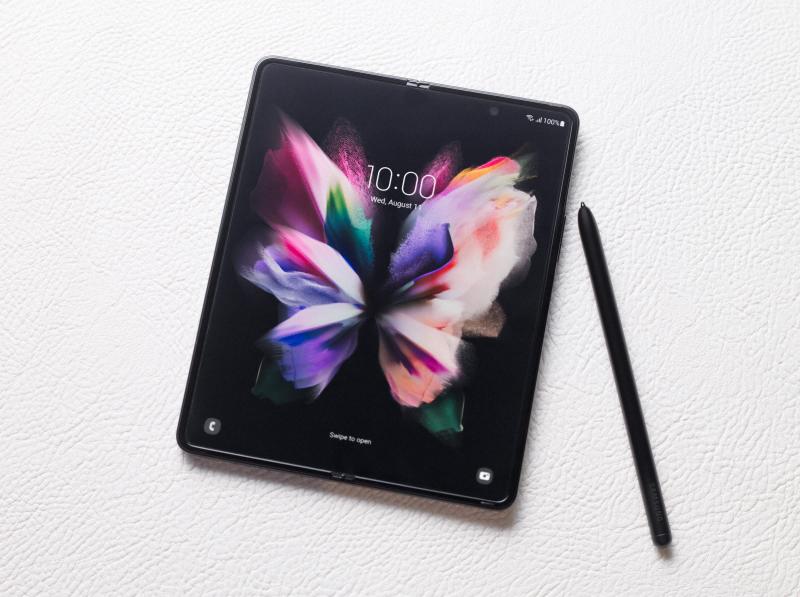 Both panels sport a Dynamic AMOLED 2X display with support for 120Hz refresh rates, and while the outer display is narrow and tall at 6.2-inches, the inner 7.6-inch display is where you’ll most likely get work done. The major downside of the fold is that it doesn’t have a dedicated S Pen slot for the stylus, and the Galaxy Z Fold 4 will reportedly not have one either. You can purchase the S Pen separately, and pick up a case that lets you carry the pen.

It’s powered by the Snapdragon 888 chipset, and it has 256GB and 512GB storage variants, and there’s 12GB of RAM for all your editing needs. There are also three cameras on the back, a 12MP primary, a 12MP telephoto with 2x optical zoom, and another 12MP for ultrawide shots. There’s a 4MP under-display camera for conference calls, and a 10MP selfie shooter.

The device can last about a day on a single charge, but that will vary on your usage. It has a 4,400 mAh battery, and it supports 25W fast wired charging. If you’re looking for a device that can do it all, and more, the Galaxy Fold 3 is expensive, but it covers everything that you’d want in a foldable smartphone.

The Motorola Moto G Stylus is a large device, like most other devices on this list. It packs a 6.8-inch IPS LCD panel with 120Hz refresh rate and FHD+ resolution. It’s responsive, and it’s excellent for multitasking and drawing. It also has a built-in stylus, letting you sketch and take notes on the go.

It’s equipped with the Snapdragon 695 5G chipset, which is excellent for multitasking and running multiple apps simultaneously. It’s plenty powerful for playing a few modern games. There’s 256GB of built-in storage, and 8GB of RAM, and if the space isn’t enough for you, you’ll be glad to know there is a microSD card slot.

The Moto G Stylus has a 5MP primary camera, an 8MP ultrawide, and a 2MP depth sensor. It has great overall quality and performance, but it won’t break any records in low-light or brightly lit environments. There’s also a 16MP selfie camera, and it can last a full day on a single charge, thanks to the 5,000 mAh battery.

If you’re on the budget and have basic stylus needs, the Moto G Stylus is currently one of the best mid-ranger on the market that gives you that, for less than half of the Galaxy S22 Ultra’s price. There’s also a 3.5mm headphone jack, which may be a dealbreaker for you. 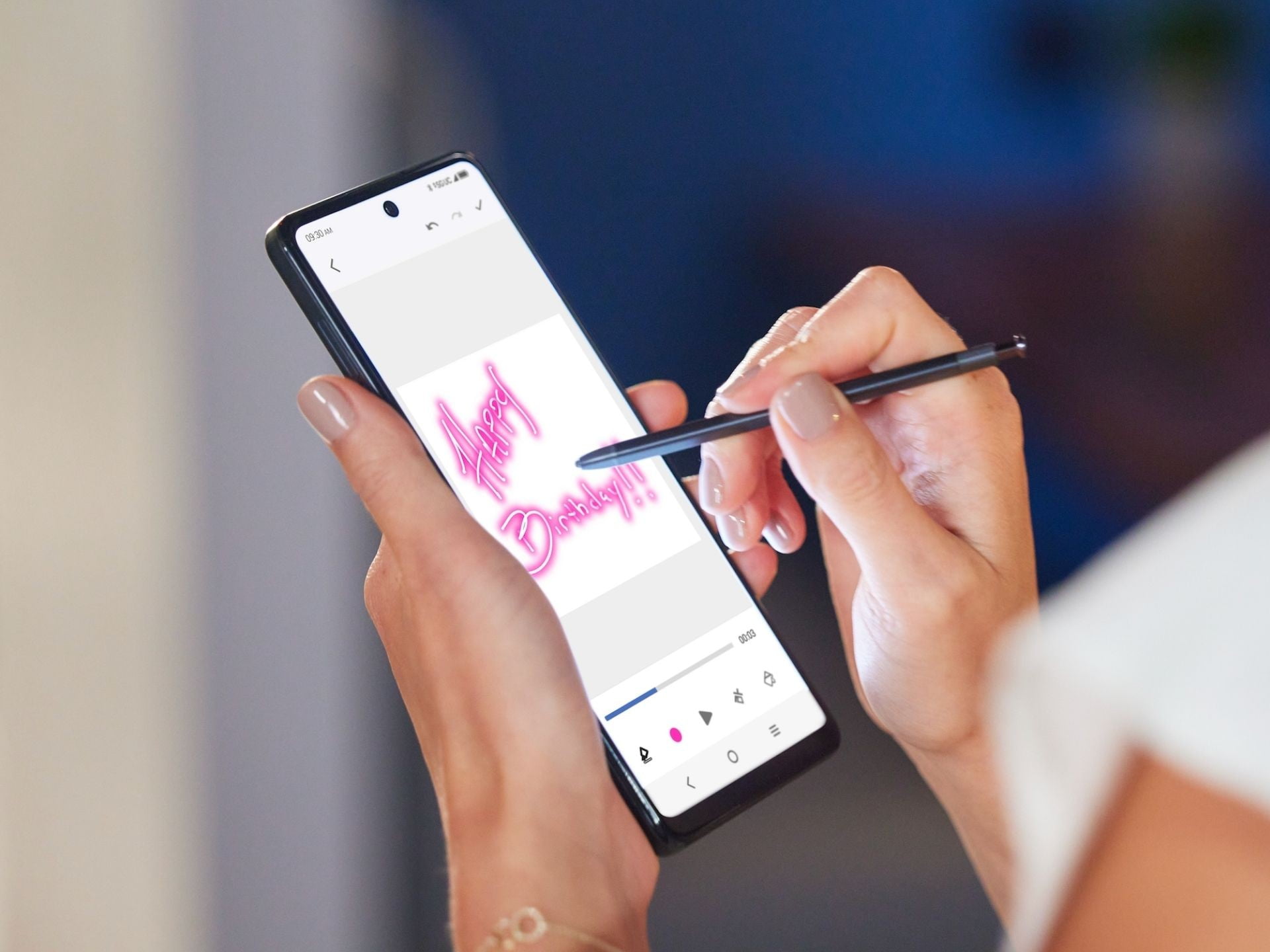 The TCL Stylus 5G is an affordable device. It has an embedded stylus. It comes with a 6.81-inch IPS LCD display with 60Hz refresh rate, and it’s powered by the MediaTek Dimensity 700 chipset. It’s paired with 4GB of RAM and 128GB of storage, and it’s perfect for taking notes, sketching, and signing documents. It has an expandable microSD card slot, and it also features a 3.5mm headphone jack, which is rare to see nowadays.

The TCL Stylus sports a 50MP primary camera, a 5MP ultrawide, a 2MP macro, and an additional 2MP depth sensor. There’s a 13MP selfie camera on the front, placed in the punch hole.

The phone is excellent for some light multitasking and gaming on the side, and while it won’t break any benchmark tests, it will be more than enough for your daily needs for surfing the web, scrolling through your social media pages, and making calls. A few paid applications are preloaded on the device, letting you take notes using the Nebo app, and the MyScript Calculator 2 for doing maths.

The device packs a 4,000 mAh battery, which is on the smaller side, but at least it features 18W fast wired charging to juice up quickly. If you’re looking for an affordable smartphone with a stylus, the TCL Stylus starts at just $258 at T-Mobile. 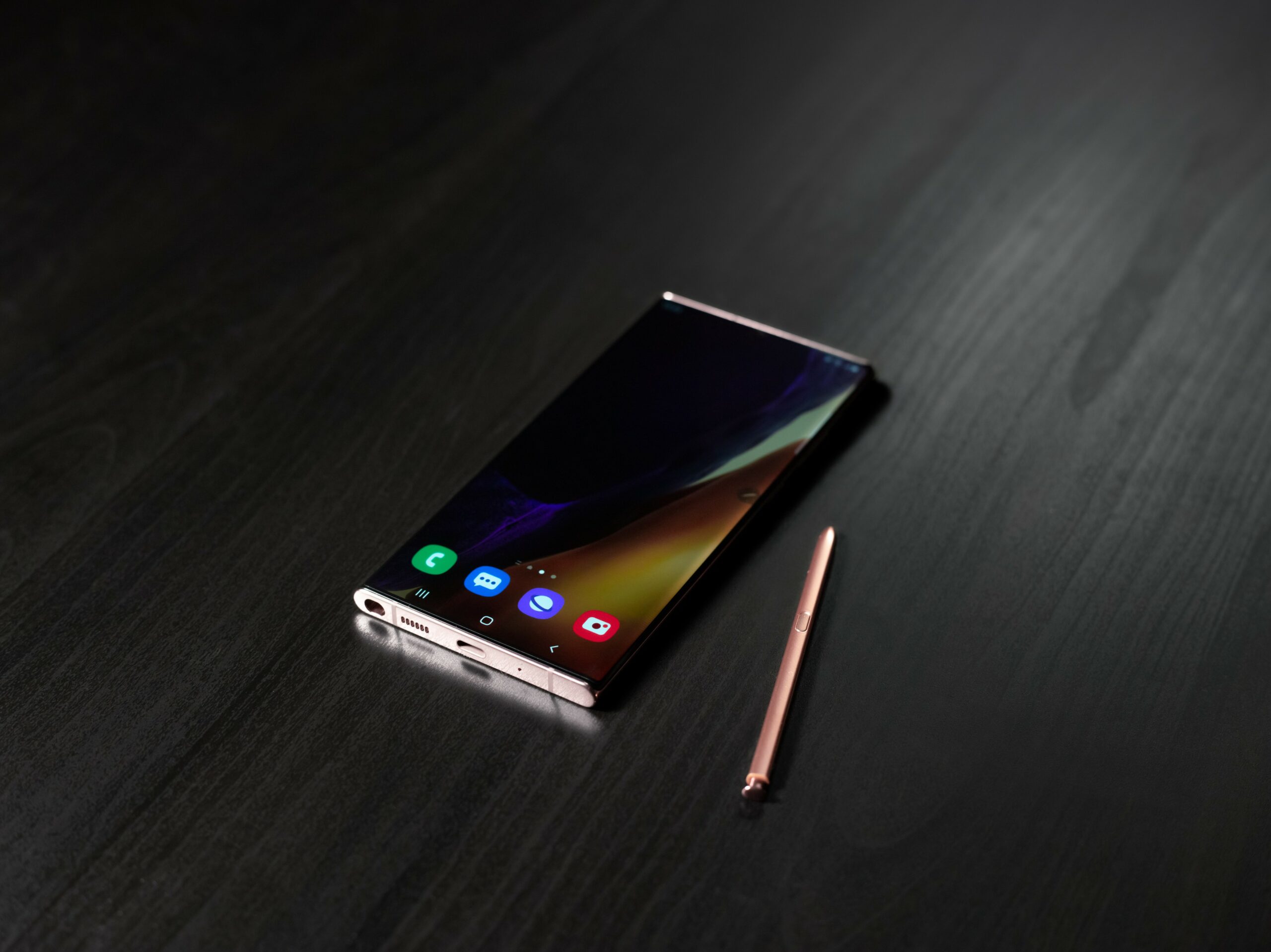 We included the Galaxy Note 20 Ultra as the last device on this list for a few reasons. Since the introduction of the Galaxy S22 Ultra, it’s becoming harder to find, as Samsung is phasing it out in favor of its more recent flagship, which makes sense. However, it’s still one of the best devices that you can pick up today, and it’s the last smartphone in the Galaxy Note series.

The phone was released back in 2020, and it’s powered by the Snapdragon 865 chipset, paired with 12GB of RAM and 128GB of base storage. While the phone is nearing it’s second birthday in August, it held up exceptionally well, and it’s still receiving updates and security patches.

The camera setup is also excellent, and it sports a 108MP primary sensor, a 12MP periscope telephoto with 5x optical zoom, and a 12MP ultrawide sensor. There’s also a 10MP selfie camera. It has a 4,500 mAh battery and it supports 25W fast charging.

The Galaxy Note 20 Ultra is one of the most affordable devices today, and if you don’t require the latest hardware and software, this will serve you well in the coming years. It has all of the S Pen functionalities that you come to expect and want from Samsung’s flagships, and it’s still an excellent phone in 2022.

If you don’t rely on the S Pen as much as some users, and you only want to use the S Pen on a few rare occasions, we recommend the Galaxy S21 Ultra. It’s a more recent device, and although it doesn’t have a dedicated slot to store the stylus, it has a better camera and might also be more comfortable than the wide and boxy Note 20 Ultra.