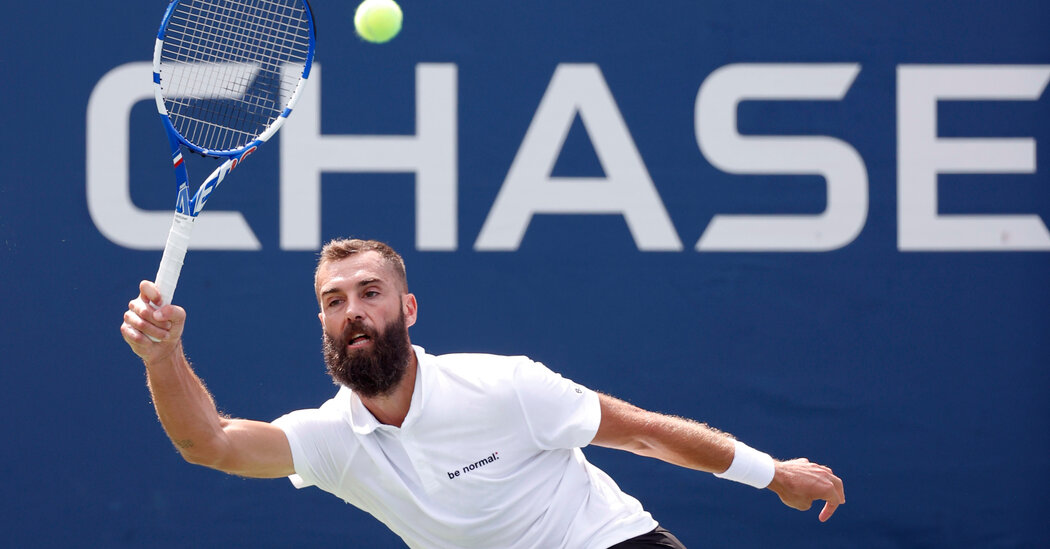 A year ago, French tennis player Benoît Paire spent the U.S. Open isolated in his Long Island hotel room after testing positive for Covid-19, unable to take his place in the draw and unable to find his happy place in the aftermath.

Paire, no pillar of consistency in normal times, struggled in new ways in extraordinary times, missing the fans and shot after shot, sometimes making very little effort as the opening-round losses piled up.

“I was there without really being there,” he said.

But the crowds are back, as the first day of the U.S. Open made loud and clear on Monday once the ticket holders managed to navigate the insufferably long security lines and actually get into the tournament.

Paire left his Manhattan hotel room in the morning and made his way to Court 13, one of the outdoor courts that still feels like an outdoor court even after all the new stadium construction at Flushing Meadows.

The fans are close to the action here, and the action on the adjacent court is close, too. The fans gathered at Court 13 soon made their loyalties clear, chanting “Benoît” a great deal more often than they chanted the name of his worthy Serbian opponent Dusan Lajovic.

“I was happy to see the crowds again, to share a moment with the people,” Paire said. “It’s true that when people applaud for a great point or a break point well saved it makes you feel good. And it pushes you, or at least it pushes me. That’s why I play tennis. So I’m taking more and more pleasure in it, and that’s why I’m coming back to my good level.”

Paire’s tennis clothes, freshly delivered from his new sponsor, have “be normal” written on them, but that does not seem like the message Paire actually wants to deliver.

He does not resemble other tennis players with his long hipster beard worthy of a 19th century French painter: think Édouard Manet. He also has a creative side of his own: conjuring half-volley winners from places on the court where most tour players would not consider trying to hit a half-volley winner. His two-handed backhand is smooth, versatile and often deadly. His forehand, with its odd and cramped backswing, is unique and not always in a good way.

But like Nick Kyrgios, another outrageously gifted tennis player who has rejected the tour without its fans, Paire, ranked 49th, is hard to take your eyes off with a racket in hand.

He left the 40th-ranked Lajovic shaking his head and chuckling after some of his best shots, but though Paire clearly cared, which was progress to be sure, he could not back up his strokes of genius with enough solid play under duress.

There were double faults at inopportune moments, unforced errors that looked lackadaisical but were also down to fatigue in the heat and humidity.

Though Lajovic’s shirt was soaked through with sweat early on, Paire was the one who looked the weariest, hunching forward and resting a hand on each knee as he settled in slowly to return serves.

But he still found the energy to blow off some steam late in the second set, losing his temper after stopping play because of a shout from the crowd and a lost point.

Tennis rules are clear on this: the point stands. But Paire took umbrage and eventually took it out on the umbrella over Lajovic’s chair, smacking it hard enough with his racket to break the umbrella and startle the chair umpire and the fans sitting in the front few rows.

Paire received his second code violation of the match — this one for unsportsmanlike conduct — and was docked a point. He went on to lose the set and the match 6-3, 7-5, 2-6, 6-4.

It was a downbeat result after his joyful run to the quarterfinals at the Western & Southern Open in the Cincinnati suburbs earlier this month. But Paire sounded like an unusually happy man for a first-round loser.

A different French player is missing the U.S. Open this year because of quarantine: Gilles Simon, who is not vaccinated and restricted to his New York hotel room after his coach tested positive for Covid. Simon was considered to be a “close contact.”

But Paire is free to swing away, free to move around the grounds that were packed on Monday as he left not-so-lucky Court 13 and made his way back to the locker room with two security guards running interference.

Not that Paire wanted to stay in his bubble. The fans kept running toward him, cellphones in hand, to pose for selfies, and though many a first-round loser would have kept his chin down and picked up the pace to refuge, Paire slowed down and accommodated each and every one.