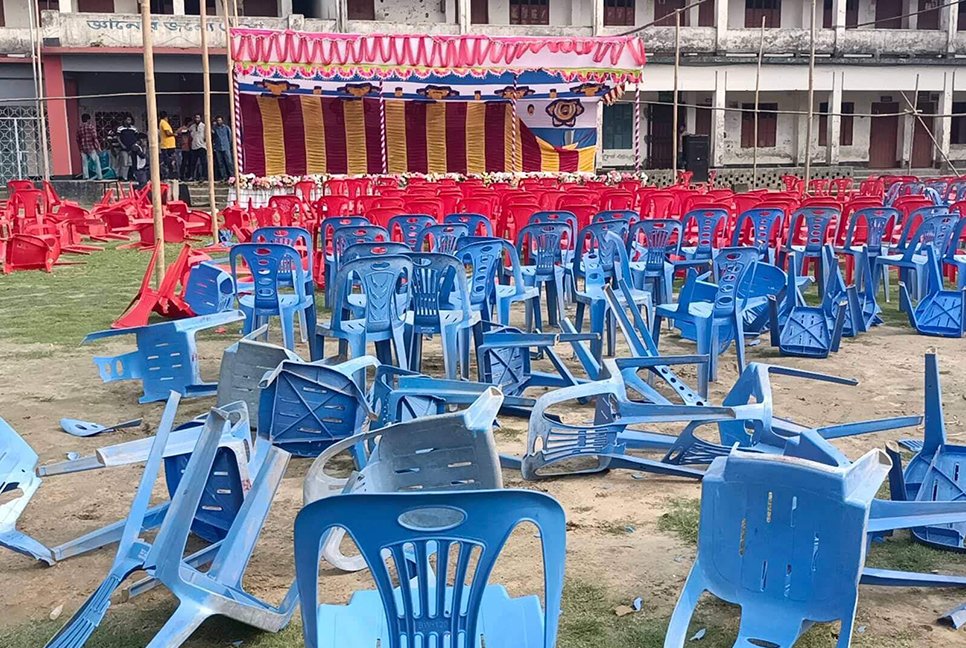 Leaders and activists of the Awami League’s allied organization have been accused of attacking the BNP’s Iftar party in Ishwarganj, Mymensingh. Leaders and activists of Juba League, Swechchhasebak League and its affiliates attacked and vandalized the Iftar program at Charnikhla High School premises on Saturday afternoon. At that time, the attackers were beaten by the police to control the situation.

It is learned that Upazila BNP organized Iftar mahfil at Charnikhla High School ground in Ishwarganj municipal area. But around 3:30 pm, leaders and activists of Juba League, Swechchhasebak League, a section of Chhatra League and allied organizations including Matsyajibi League took out a procession from the area in front of the Municipal Sadar Muktijoddha Sangsad. The procession with local weapons went to Charanikhla High School and vandalized it once and threw brick-bats. ue’s affiliated organization faced police obstruction while attacking in the second phase. Several people were injured in the beating by the police at that time. Several BNP members were also injured in the attack. The attack also vandalized the private office of the BNP general secretary at Kathgola in the municipal town. Police have been deployed in the area to control the situation.

Sami Usman Gani, joint convener of the Upazila Swechchhasebak League, said they were attacked by the police when they went ahead as they made anti-government remarks at the BNP event. On behalf of the BNP, the police attacked their leaders and activists.

Harun Aur Rashid, general secretary of the upazila BNP, said the iftar was organized with the permission of the school authorities. Those who have done this are the rebellious part of the Awami League. They will not take any legal action.

Ishwarganj police officer in charge (OC) said. Abdul Quader Mia said that after receiving the news of the attack, the police went and brought the situation under control. Police have been deployed at the spot.