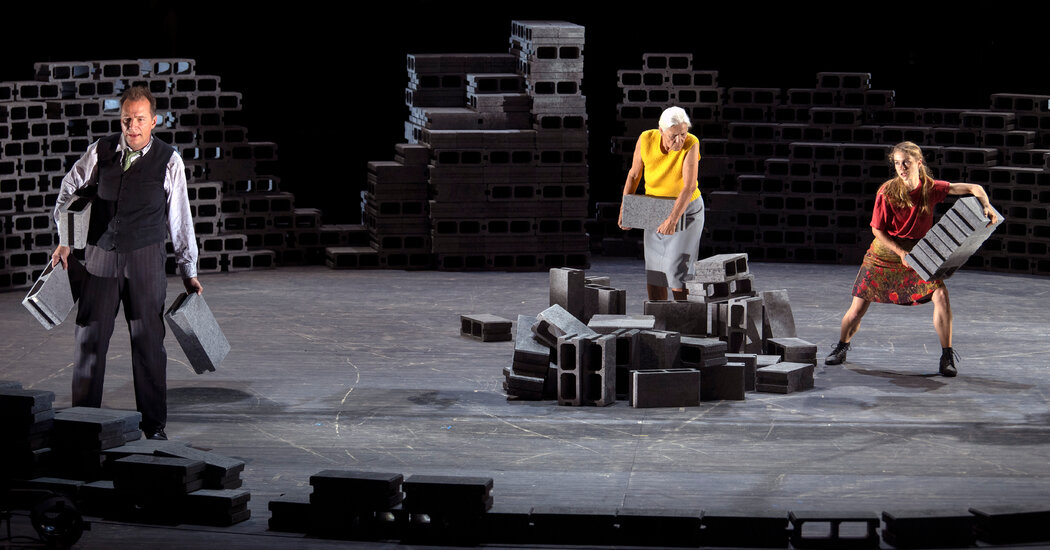 ESSEN, Germany — In the constellation of Europe’s performing arts festivals, few make a more contrasting pair than the Salzburg Festival and the Ruhrtriennale.

The differences begin with the events’ settings. Salzburg, Mozart’s picturesque hometown, nestled in the Alps, lies at the geographical center of Europe. The Ruhr region, Germany’s rust belt, is comparatively isolated. Salzburg boasts stunning mountain vistas, an old town and a fairy-tale castle. The Ruhr region is a linked network of drab postindustrial cities.

The Salzburg Festival usually plays host to well-heeled visitors from over 80 countries, while the Ruhrtriennale caters heavily to locals with subsidized tickets.

Yet for all their differences, the two festivals share some DNA.

When the Flemish impresario Gerard Mortier founded the Ruhrtriennale in 2002, he was coming off a decade of shaking things up as the Salzburg Festival’s artistic director. Although his time there is now seen as a golden age, Mortier’s attempts to nudge the festival in a more artistically daring direction proved wildly contentious at the time. When Mortier arrived in the Ruhr region, his new festival gave him the opportunity to realize large-format experiments that he could never pull off at Salzburg.

Two decades later, the Salzburg Festival’s roster of operas and concerts has recaptured something of the boundary-pushing and avant-garde flair of the “Mortier era.” The festival’s dramatic program, however, has struggled to keep up.

Salzburg’s outdoor production of “Jedermann,” a morality play written by Hugo von Hofmannsthal, one of the festival’s founders, is the event’s oldest tradition. In recent years, little of the Austrian poet and dramatist’s other work has been staged there. This summer, however, as part of the festival’s ongoing centenary festivities, Hofmannsthal’s “The Falun Mine” has taken center stage.

Written in 1899, though never performed during its author’s lifetime, “The Falun Mine” is a ghost story composed in the pungently lyrical language of Hofmannsthal’s best early work. It tells the story of a miner beset by strange apparitions and swallowed up by a mountain on his wedding day, and is choked with symbolism, much of which remained inscrutable in the dreary production by the Swiss director Jossi Wieler.

The actors declaimed their lines in a highly mannered tone from a rotating stage littered with cinder blocks. It often seemed that the play itself was buried alive under the rubble.

A theatrical death knell also sounded for Salzburg’s new production of Friedrich Schiller’s “Maria Stuart.” Despite some powerful images, thanks to a silent chorus of 30 nude male performers, or a single swinging light bulb, Martin Kusej’s stripped-down staging, a coproduction with Vienna’s Burgtheater (where Kusej is the artistic director) fell flat, sabotaged by hammy overacting from nearly every member of the cast.

The atmosphere of gloom and doom seemed to spread like a fog from Salzburg to the Ruhr, where a number of the region’s “cathedrals of industry” — the disused factories that have been repurposed as theaters — had a haunted quality at the start of the Ruhrtriennale.

This summer’s program is the first of three to be overseen by Barbara Frey, a Swiss director and the second consecutive woman to run the festival after Stefanie Carp, whose troubled tenure was cut short by the Covid-19 pandemic. Based on Frey’s work so far, she seems set on restoring the Ruhrtriennale to the provocative and artistically unpredictable spirit of its founder.

In her own production of “The Fall of the House of Usher,” the edifice in question was the Maschinenhalle Zweckel, the electrical center of a former coal mine in the city of Gladbeck. In this sinister show, another coproduction with the Burgtheater, a close-knit group of eight performers narrated five of Poe’s spine-tingling tales in German, English and Hungarian. With ritualistic precision, they luxuriated in the American writer’s melancholy prose.

This atmosphere of suffocating sadness turned gleefully macabre with “The Feast of the Lambs,” a musical theater work written by the Nobel Prize-winning author Elfriede Jelinek and the composer Olga Neuwirth. Based on a play by the British writer Leonora Carrington, it is, like “Usher,” a tale of madness and familial decay.

The directors Bush Moukarzel and Ben Kidd, of the Dublin-based theater company Dead Center, filled the cavernous Jahrhunderthalle, a former gas power plant in the city of Bochum, with an eye-popping production, complete with trippy video projections, falling snow and a blood-red lake, effectively blurring the boundaries between domestic and outdoor horrors, as well as between human and animal savagery. (You can watch a streamed performance on the festival website).

As in “Usher,” the oddball spirit of “Lambs” was tethered to artistic seriousness and skill. Things looked very different for “A Divine Comedy” by Florentina Holzinger. This young Viennese choreographer has gained fame for extreme performances that deconstruct dance history and sexualized representations of the female body.

Holzinger is part of the incoming artistic team at the Berlin Volksbühne, where “A Divine Comedy” will transfer in late September. It’s a full-on three-ring circus of horrors that was mostly just tedious. I didn’t buy Holzinger’s willfully transgressive spectacle, but apparently I was in the minority: The only thing that truly shocked me about “A Divine Comedy” was how much the audience loved it.

I felt there was one artistic work at the Ruhrtriennale that connected to humanity — and it wasn’t in a theater.

Over the past decade, the Swiss artist Mats Staub has conducted hundreds of interviews with individuals of various ages and backgrounds for “21 — Memories of Growing Up,” which has been installed in a turbine hall in Bochum. Spread over 50 different stations, the video interviews provide varied reflections on maturity, independence and happiness. The project feels like an archive of human strivings and the possibility for rebirth.

Renewal was the watchword at the founding of both the Salzburg Festival and the Ruhrtriennale. In 1920, that meant reclaiming and safeguarding European culture after the Great War and the loss of the Habsburg Empire; at the turn of the millennium, it meant rejuvenating a depressed, postindustrial corner of Germany.

If the onstage offerings at both events this year have seemed unrelentingly grim, they have at least reflected the struggles of our time. Yet, as we cautiously adjust to living with a pandemic for the foreseeable future, we could desperately use some renewal, too.

The Salzburg Festival continues through Aug. 31.

The Ruhrtriennale continues through Sept. 25.