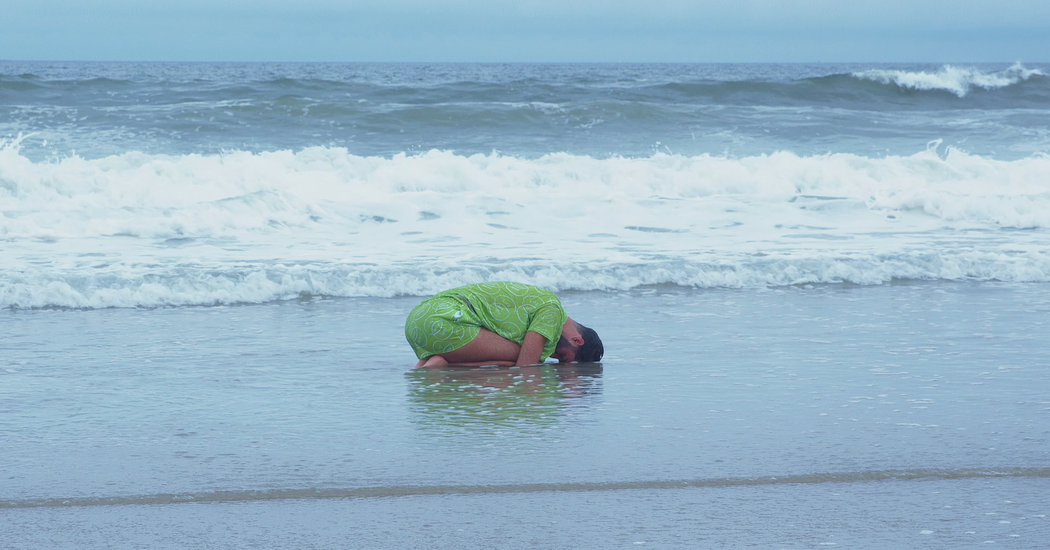 “The beach is a moody place, you know?” the choreographer Moriah Evans said.

Rockaway Beach, stretched under a sky of filmy clouds, was certainly in a mood last Friday as waves sprouted higher and higher and the squawks of sea gulls were interrupted by the alarming beeps of a weather alert. “Whoa, what is that?” Evans asked before muttering under her breath, “Get out now.”

A storm was brewing, but Evans was only mildly agitated. It is what it is. The backdrop of her newest work, a one-off, is the ocean. She’s giving spontaneity a serious whirl.

In the aptly named “Repose,” 21 dancers will progress from Beach 86th to Beach 110th Streets on Sunday starting at 1 p.m. Performing several movement scores drawn from everyday actions and responses to nature at the beach, the dancers will travel 1.4 miles over the course of six hours. Evans would agree that this is unusual for her: “I’m not some outdoor performance aficionado,” she said.

And to pull it off, she realized she can’t count on anything, from the weather to the beachgoers. “If it’s a cold day and rainy, the relationship to the public is going to be entirely different,” she said. “But conceptually, for me, we’re not performing this to be seen. I say this as a kind of wish for the work: We’re actually doing this for the waves, for the horizon, for the sky, for the sand, for the birds that pass by.”

Throughout August, Evans has held rehearsals with her stellar, multigenerational cast, but never more than two dancers at the same time. The process is “very go and do,” she said, as the performance will be. “It’s not like I’m rehearsing it again and again. I’m also excited because I don’t know what this piece is going to be really. We’ll see what happens. I don’t know what’s going to happen!”

That’s all for the better. Aren’t you in the mood for something fresh? This won’t be another one of those mixed bills of dancers displaying how happy they are to be dancing again. “Repose,” commissioned by Sasha Okshteyn for her Beach Sessions Dance Series, isn’t just another site-specific work. It’s a vital, visceral response to our current moment that looks at the ways in which the body — whether dancing, moving or in repose — can energize an outdoor space. And outdoor spaces are all the more important during the pandemic.

Okshteyn said that after the past year and a half she wanted to produce something “a little bit more investigative, that’s not so like in your face dancing, but that’s more meditative and accessible.”

The communal aspect of the beach is part of it, too. “I’ll be interested to see how accessible it is,” Okshteyn said. “It’s called ‘Repose’ — she’s looking at the leisurely positions of the beachgoers, so it is very accessible because it’s kind of pedestrian movement — but it will be interesting to see what people think of it. Is it too abstract?”

Evans’s work — internal and probing, with movement emanating from deep in the body — possesses a rawness that fits in nature. It also has a way of being both solemn and lushly free. To Evans, the beach is a theater of the flesh. Her method of framing everyday actions and amplifying them is emotional, joyful, earthy and even humorous. “Repose” is about giving into feeling and the elements; in doing so, Evans takes dance to a different place.

Her magnetic cast — full of stars of downtown dance — is an important part of the journey and includes Iréne Hultman, Marc Crousillat, Shayla-Vie Jenkins, Niall Jones, Jess Pretty and Antonio Ramos. What Hultman, a choreographer and former member of the Trisha Brown Dance Company, appreciates most about Evans’s work is that she goes into the unknown. “I’m looking forward to being in between land and water and then to have the air,” she said, “and to to be almost like a herd of animals.”

Evans’s evolving movement scores feature “mirroring,” or copying the acts of people on the beach; and “crawl rock roll position,” in which the performers crawl like an insect or an animal; become as inanimate as a stone; and roll into the ocean as taut as a log or as stretched and supple as a highly trained dancer.

The “rock” moment from “crawl rock roll” — each component can be separated to be its own score — is one of those actions that sometimes leads to a parks department employee pausing to ask if everything is OK. It has a lifeless quality and sometimes have the look of child’s pose in yoga, with the arms pinned to the sides. It happens in the sand.

During one rehearsal, Evans explained to the dancer Daria Faïn that she was looking for containment — to think about a contraction.

“Like Martha à la New Age,” she said with enthusiasm, referring to Martha Graham, whose deep pelvic contractions were a hallmark of her dances. “Like contraction into inanimate matter!”

For another score, the cast members have the option of performing something entirely personal. In that same rehearsal session, Evans asked Faïn, “Do you have a beach dance fantasy?” Her first wish was to be able to swim into the sea — really far. Alas, lifeguards at Rockaway don’t go for that sort of thing.

Faïn paused while scooping wet sand onto her legs. “I would like to be buried,” she said. “That is a huge fantasy.”

Sorted. As for some others? Anh Vo will wail at the ocean’s edge. Alex Rodabaugh will perform cartwheels in the water. This fantasy score was inspired by Evans’s original idea for the work: “It was to have 100 naked bodies on the beach kind of hanging out the way sea lions hang out on the cove,” she said. “Just being in a state of repose.”

It gives you a window into her agile imagination. “That didn’t happen,” she added. “So now this is happening.”

During rehearsals, beachgoers stared and sometimes laughed. Many drifted away, but a few asked what was going on. Evans would tell them, “I’m just reframing your actions as a dance” or talk about how they are engaging with “the dance of the everyday.” She tells her performers — if they are questioned — to make eye contact and to be open. “Like spread joy,” Evans said. “But don’t get distracted or start into what you’re doing, why you’re doing it and talking about is it art or not art? Let the people have that conversation. It’s not our job.”

But for the performance itself, the dancers won’t fade into the seascape so easily: They will be wearing green bathing suits in the same Pantone shade (PMS 368) of those who work in the parks department. The costumes are credited to the Bureau for the Future of Choreography and Amber Evans (Moriah’s sister), and they pop. Eric Peterson, the parks administrator for Rockaway, appreciates the homage.

“It’s picking up the elements, the flavors of the beach and of the parks department — of what we do,” Peterson said. “And it’s picking up those elements while not usurping — they’re not dancing in staff uniforms, they’re incorporating elements of the color palette.”

All the while, Evans is aware of the invisible choreography of the beach. When the lifeguards blow their whistles at 6 p.m. to leave, it’s a signal for everyone to get out of the water. It’s also when the sea gulls know it’s prime time to hunt for trash. In that final hour — because the lifeguards have gone off-duty, amplified sound is permitted — the musician and composer David Watson will present a sonic sunset score with live performance as well as prerecorded audio and field recordings.

When Evans thinks about “Repose” she is considering everything — nature, park workers and beach behavior with its small, group arrangements and configurations — as a horizontal mass. “What is the purpose of the theater?” she said. “Sometimes I think it’s just a frame to hold people together in an experience. And in that way, I find the beach is also doing that: We’re in a shared framework.”

Fittingly, audience members are invited to follow the performers as they progress or even to create their own movement experiences. Evans has created a comic strip that shows 16 actions for “Repose.” There are instructions for small events, like: “Recline at the shoreline, relax into a position, stay there until the waves crash and move your body into a new position.”

There’s a reason the comic, featuring illustrations by Jeffrey Lewis, ends with a line that reads, “A performance by Moriah Evans and you and them and us and many people for Beach Seasons 2021.” It’s inclusive because to Evans, art is made by people as well as artists.

“People attending a performance make the performance happen or contribute to it what is,” she said. “I think it will happen inevitably in a public space like this. And you really can’t control the conditions. We cannot control the weather or the lights or the behavior of the public in relationship to it. Giving up control in that way is a good thing.”