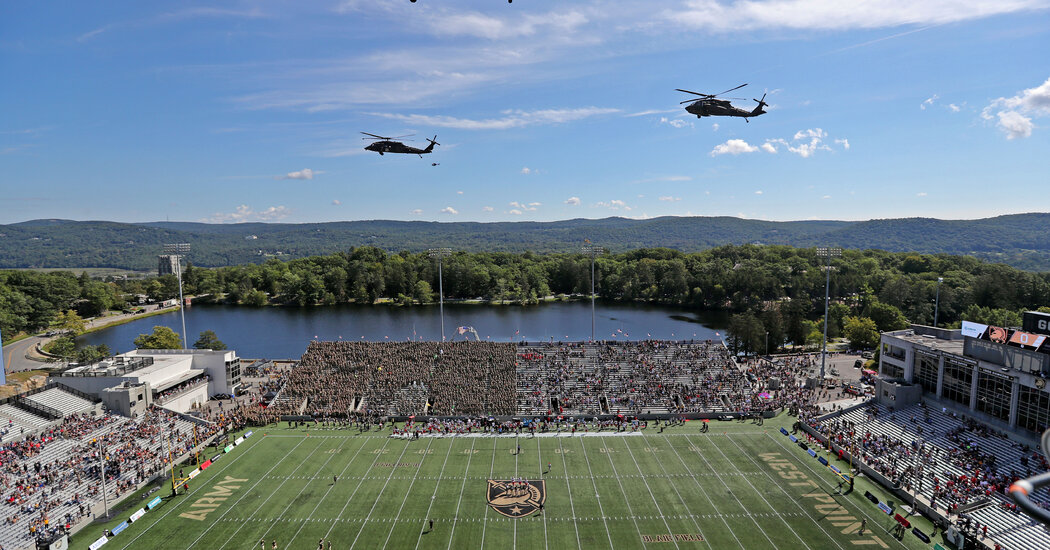 He added: “It doesn’t feel quite finished because of the threats domestically and internationally. Some of that closure won’t happen the way we think of a ticker-tape parade for some of our other conflicts.”

Still, with the last troops out of Afghanistan, this year’s seniors are the first in 20 years who will graduate without the expectation that they will be shipped off to war.

That thought surely had to enter the mind of some of the roughly 25 recruits who were lined up along the sideline Saturday watching Army warm up. Jack Latore, a defensive end from Middletown, N.J., who is also considering Rutgers, said he hadn’t given much consideration to the war ending. His father, Dan, who played at Rutgers, said he liked the academics that West Point offered, “whether it’s wartime or not.”

Dan McCarthy, a deputy athletic director, said that in recent years about one in five cadets went to a war zone within five years of graduation. Even so, he said, “Every parent of a kid we’re recruiting is going to ask: Is my son or daughter going to Afghanistan and Iraq?”

When Arik Smith, a senior linebacker from Bowie, Md., was a high school senior in 2016, there was a far greater expectation that he would be heading to Afghanistan. Even though his grandfathers had served in Korea and Vietnam, and his father was in the Coast Guard, he said: “There was a little bit of concern. We considered the risk factor. It’s not as much of a risk factor now as it was then.”

On Saturday, there were few signs of the dark sides of a 20-year war.

It marked the culmination of an eventful week. It was branch week at the academy, when different branches — infantry, cyber, air defense or transportation, for example — recruit cadets to their programs. And on Friday, a statue commemorating Buffalo Soldiers was unveiled. Smith, who is Black, said the statue is an important step to recognize “everybody that is part of the foundation of what we’re doing here.”

Much of the pomp and circumstance was reserved for Saturday: Paratroopers parachuted onto the field, helicopters staged a flyover, and fire trucks and police cars lined Black Knight alley outside the stadium.