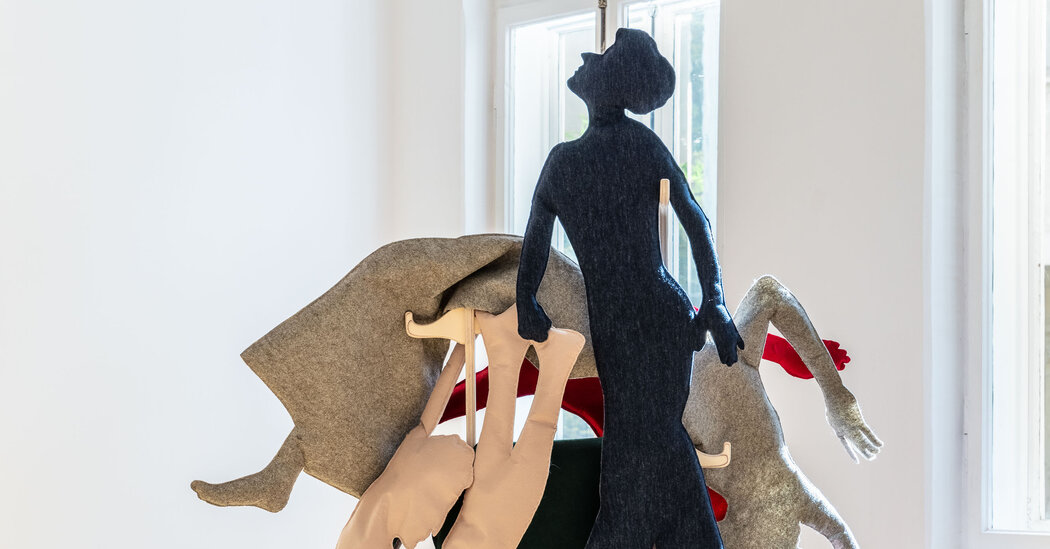 Summer’s not quite over — you’ve still got time for a dash upstate, and this weekend in particular the whole Hudson Valley is in bloom with art to see. The biggest single event this time is the New Art Dealer Alliance’s brand-new NADA x Foreland, a kind of art fair meets group show, spearheaded by the curator Jesse Greenberg in a newly rehabilitated complex of Civil-War-era buildings — the titular “Foreland”— in Catskill, N.Y. The idea was essentially to get people out and about again, and the 81 galleries and nonprofits, chosen from an open call, will install their largely sculptural work together, without booths. Though some exhibitors come from as far afield as Bucharest and Vancouver, most are from New York State.

As you can tell from the name, NADA focuses on younger galleries, and the work you’ll see at a NADA event can be pretty raw, too. Many galleries are making their art-fair debuts there, like International Waters, a year-old Bushwick space uniquely situated in a former loading dock with a slanted floor. “Normally I wouldn’t get excited by an art fair again,” said the artist Matt Taber, who founded the gallery with his wife, Trang Tran, and a business partner, Mark Brinda. “But a lot of the people we’ve been in contact with, a lot of the artists we’re talking to — everyone is converging on this fair.”

Concurrent with NADA x Foreland, but running through Sept. 12, is another group show, in another of Foreland’s exhibition spaces, mounted by the New York City galleries Mrs. and Rachel Uffner. Sara Maria Salamone, co-founder of Mrs., grew up near Albany, and said she had conflicted feelings about joining the migration of city art people upstate. “But ultimately,” she added, “I think it’s wonderful for the capital region to have this energy being pumped into it, finally. I really didn’t feel that growing up.”

Both shows are also part of Upstate Art Weekend, a festival founded last year by the curator Helen Toomer after she moved to the Catskills and found herself drawing up art itineraries for visiting friends. Upstate Art Weekend now offers an impossibly rich hypothetical itinerary, complete with a handful of special parties and performances, that takes in more than 60 museums, galleries, sculpture parks and other aesthetic destinations on both sides of the Hudson River from Garrison to Chatham.

In addition to flagship institutions like Storm King and Dia: Beacon, the festival includes several major college museums (SUNY New Paltz, Vassar, Bard) and a robust sampling of cross-fertilization with the metropolis: There are galleries which, like Toomer, relocated from the city (Elijah Wheat Showroom) or were founded by city gallerists (Airfield), city galleries with upstate outposts (Geary, Fridman) and a pair of upstate galleries with recently opened or soon-to-open, branches in Manhattan (JDJ, Mother).

Passing the time is a social form in the paintings of Elias Mung’ora, a Kenyan artist with his eye and emotions tuned to the texture of daily life in Nairobi. Each of his recent paintings functions as a social vignette: A sidewalk seamstress, with no customers in sight, has a friend sitting beside her, keeping her company. Four men converse, perched on furniture of convenience — a wood trestle, mismatched blue plastic chairs. Small crowds wait in line for some purpose outside the frame, or cluster to peer into a doorway. Indoors, two men on a rounded sofa lean close in, their chat more compelling than their cups of tea.

Mung’ora, born in 1992, is largely self-taught, a product of a dynamic scene in Nairobi that is gradually gaining international attention. His first solo show in the United States, “Gathering of Small Fires,” is now on display in the Africa-oriented Montague Contemporary gallery in Chelsea. He grew up in a provincial town, and upon moving to Nairobi, first studied real estate. His paintings brim with curiosity about the metropolis as a large, ever-shifting organism, and the ways in which ordinary people navigate its obstacles and make their lives amid its inequalities.

At times in past work, Mung’ora has gone for maximal urban scenes that are chaotic and sometimes bleak. These new paintings, made during the pandemic, gain from their embrace of the lulls in big-city life, and the emergence of his figures as realized character studies. Working in brilliant acrylics, with a fine command of bold, contrasting colors, he now also incorporates photo transfers from archival images in Kenyan history. Highly layered, often finely balancing careful detail and with blur in both the figures and their settings, Mung’ora’s canvases become distillates of the city itself, as much as generous portraits of its people.