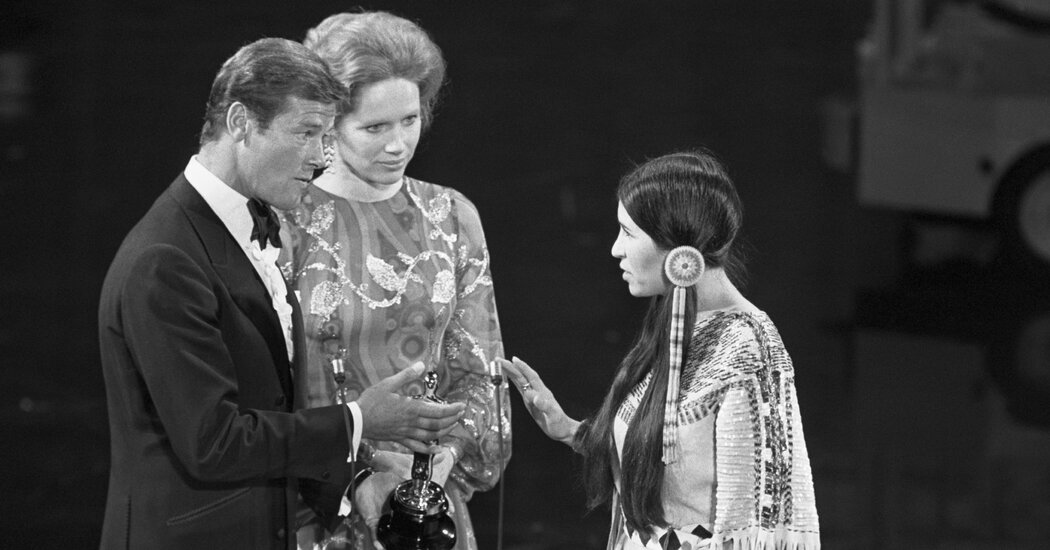 The Academy of Motion Picture Arts and Sciences has apologized to Sacheen Littlefeather, an Apache and Yaqui actress and activist who was booed onstage at the Oscars in 1973 after she refused the best actor award on behalf of Marlon Brando.

The Academy said in a statement on Monday that it had apologized to Ms. Littlefeather, 75, in June, nearly 50 years after Ms. Littlefeather pierced through the Academy Awards facade of shiny statues and bright lights in 1973 and injected the ceremony with criticism about Native American stereotypes in media.

Her appearance at the ceremony, the first time a Native American woman stood onstage at the Academy Awards, is perhaps one of the best-known disruptive moments in the history of the award ceremony.

When Ms. Littlefeather, then 26, spoke, some of the audience cheered her and others jeered. One actor, John Wayne, was so unsettled that a show producer, Marty Pasetta, said security guards had to restrain him so that he would not storm the stage.

Ms. Littlefeather said she was “stunned” by the apology in an interview with The Hollywood Reporter. “I never thought I’d live to see the day I would be hearing this, experiencing this,” she said.

Ms. Littlefeather also brought attention to the federal government’s standoff at Wounded Knee with Native Americans in the 1973 speech, which she came up with shortly before being called onstage on behalf of Mr. Brando, who was to receive the best actor award for his performance as Vito Corleone in “The Godfather.”

Ms. Littlefeather said in an interview with the Academy, which was published on Monday, that she had been planning to watch the 45th Academy Awards on television like everyone else when she received a call the night before the ceremony from Mr. Brando. The two had become friends through her neighbor, the director Francis Ford Coppola. Mr. Brando asked her to refuse the award on his behalf if he won.

Ms. Littlefeather arrived at the ceremony with only about 15 minutes left of the official program, wearing a glimmering buckskin dress, moccasins and hair ties. Ms. Littlefeather said she had little information about how the night would work, but Mr. Brando had given her a speech to read if he won.

That plan evaporated when a producer for the Oscars saw the pages in her hand and told he she would be arrested if her comments lasted more than 60 seconds, she said.

She introduced herself, then explained that Mr. Brando would not be accepting the award because of his concerns about the image of Native American people in film and television and by the government. She paused when a mix of boos and cheers erupted from the audience.

“And I focused in on the mouths and the jaws that were dropping open in the audience, and there were quite a few,” she told the Academy. “But it was like looking into a sea of Clorox, you know, there were very few people of color in the audience.”

The crowd quieted, and Ms. Littlefeather mentioned the Wounded Knee standoff and then left the stage without touching the golden Oscars statue. She said some audience members did the so-called “tomahawk chop” at her and that when she went to Mr. Brando’s house later, people shot at the doorway where she was standing.

“When I went back to Marlon’s house, there was an incident with people shooting at me,” she said. “And there were two bullet holes that came through the doorway of where I was standing, and I was on the other side of it.”

Ms. Littlefeather, who was not available for an interview on Tuesday, told the Academy that speaking about these events in 2022 “felt like a big cleanse.”

“It feels like the sacred circle is completing itself before I go in this life,” said Ms. Littlefeather, who told The Guardian in June 2021 that she had terminal breast cancer.

The former president of the Academy, David Rubin, wrote in the apology to Ms. Littlefeather that the abuse she faced because of the speech was “unwarranted and unjustified.”

“For too long the courage you showed has been unacknowledged,” Mr. Rubin wrote. “For this, we offer both our deepest apologies and our sincere admiration.”

Mr. Rubin’s letter will be read next month at a program at the Academy Museum of Motion Pictures, “An Evening with Sacheen Littlefeather.”

The Academy described it as an event of “conversation, reflection, healing and celebration.” Ms. Littlefeather said in a statement that she was looking forward to the Native American performers and speakers at the event, including Calina Lawrence, a Suquamish singer, and Bird Runningwater, the co-chair of the Academy’s Indigenous Alliance, who is Cheyenne and Mescalero Apache.

“It is profoundly heartening to see how much has changed since I did not accept the Academy Award 50 years ago,” she said. “I am so proud of each and every person who will appear onstage.”