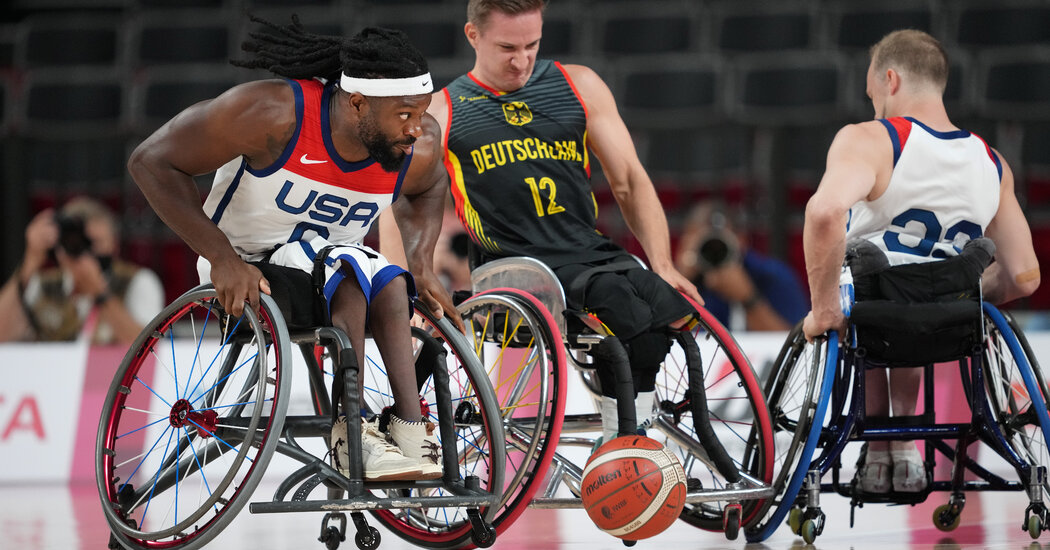 TOKYO — To play wheelchair basketball for a living, members of the U.S. Paralympic men’s team have put their passports through vigorous workouts.

Matt Scott, a five-time member of the American team, has played in Italy, Spain, Germany and Turkey. He will vouch for the intensity of the crowds in Turkey by recommending a YouTube video of a brawl among fans at a game in Istanbul. The police came. They used tear gas.

Brian Bell — a father of five, ages 1 to 9 — goes overseas with his family for about eight months a year, then returns to Chicago to be near his wife’s relatives. Most recently, he joined Steve Serio and Michael Paye, four-time U.S. Paralympians, on the powerful RSV Lahn-Dill team in Wetzlar, Germany.

Some of their European competitors are surprised by the absence of a professional wheelchair league in the United States, the birthplace of the sport and the reigning Paralympic champion in the men’s and the women’s game.

“The whole world associates wheelchair basketball with America,” said Joe Bestwick, a member of the German Paralympic team who played for Lahn-Dill. “They just think it goes hand-in-hand, of course, with the N.B.A. being the big league that it is.”

Joshua Turek, 41 and making his fourth Paralympic appearance for the United States, understands the limited sports palate of his home country. He is hardly baffled that he and his teammates had to become expatriates to keep playing the game they love at the highest level.

“Sadly, no,” said Turek, who played overseas for about 16 years. “The United States’ view of sports is very masculine driven. I think that you see some of the struggles for the W.N.B.A. and most of the female sports. And I think oftentimes disabled and adaptive sports are kind of put in that same category.”

Many players in the W.N.B.A. go overseas in the off-season to augment their income, and often get deals worth substantially more than their earnings in the U.S. For wheelchair players, there is no women’s pro league, though Britain’s wheelchair basketball association recently announced that it planned to introduce one next year.

Some of the professional men’s teams in Europe have a woman on their roster, under an arrangement based on the impairment classification system used in Paralympic sports. The basketball classification scale starts at one point for players with the most limited functional capacity and goes up to 4.5 points; the total for a team’s five players on the court any time must add up to no more than 14.

In the men’s pro leagues, 1.5 points are deducted from a woman’s classification, allowing her team to build a slightly stronger cast around her than it could with a man classified at the same level.

Rose Hollermann, 25, of the U.S. women’s team, who is classified at 3.5 points, started playing for a Spanish team in the Canary Islands in 2019, not long after she graduated from the University of Texas at Arlington, which has one of the country’s strongest wheelchair basketball programs.

She figured she would play one year there in Las Palmas, living in an apartment paid for by the team, close to the Atlantic Ocean. Then, she said, she would return home to “start a career and settle down.”

That plan didn’t last long. The fans embraced Hollermann, chanting “Rosa Maria” or “Rosemary.” Her Spanish progressed to the point where she didn’t always rely on the translator in the huddle. And she saw the possibility of having a career in basketball.

“I realized it was something that I love a lot,” Hollermann said, “and I don’t know when I’ll be willing to give it up.”

For men in the Paralympics, playing professionally has become essential. The experience cannot be replicated, players say, even in a high-level amateur organization like the top division of the National Wheelchair Basketball Association, which includes the New York Rollin’ Knicks. They would still need to work, leaving less time to play basketball.

So the Americans leave home. According to several players, pay varies widely depending on the country and the caliber of the players. But top Paralympians in Europe might receive salaries in a range of 45,000 to 60,000 euros, or about $53,000 to $70,000, for about eight months of work, often with the team covering the cost of housing and perhaps even a car.

At the Paralympics, loyalties must be redrawn, at least temporarily.

In Tokyo last week, the U.S. and Germany met in the first round, with Bestwick on one side and Paye, who was a groomsman in Bestwick’s wedding, on the other. They have played together for Lahn-Dill under Nicolai Zeltinger, who is coaching the German Paralympic team.

“Probably half of their roster right now, I played with at some point in my career,” said Paye, who married a German woman and has no plans to live in the U.S. again.

Scott delivered 10 crucial assists in a tense 58-55 American victory, and at the final buzzer Andre Bienek of Germany sought him out to offer a pat on the back. The two were teammates at the University of Wisconsin-Whitewater, another college with a renowned wheelchair basketball program.

“Being a five-time Paralympian, I know all these guys,” Scott said. “Somebody is out on the floor, I’ve played against them. I know what they have for breakfast. I know who their cousins are.”

He said he wondered whether having so many Americans playing overseas had diminished the team’s advantages.

“You saw how strong that German national team was,” Scott said. “A good majority of our players have played over there, and they’re enhancing the game for other countries and that kind of takes away from our own sometimes.”

Turek sees the same changes, and views them with an appreciation for the game’s evolution.

For years, he said, the most effective wheelchair basketball lineup was top-heavy, with, say, two big players classified as 4.5, then a 3, then two 1s. Over the past decade, he said, the U.S. introduced a more balanced approach that produces an up-tempo game with emphasis on the outside shot.

“We’re not playing these enormous guys,” Turek said, “but we’re just really, really good one through five. And basically everyone in the world now has transformed to our system.”

But can the U.S. ever be transformed into a home for professional wheelchair basketball?

Bestwick didn’t want to speculate on why the sport had not progressed more in the United States, because he has not played regularly in the country. But he had a clear idea of what was needed to create a successful league.

“Germany sees wheelchair basketball as a professional sport, though it is also a disabled sport. But the disability isn’t the main focus,” he said. “The main focus is that it’s aggressive, that it’s fast, that it’s dynamic, that it’s so inclusive.”