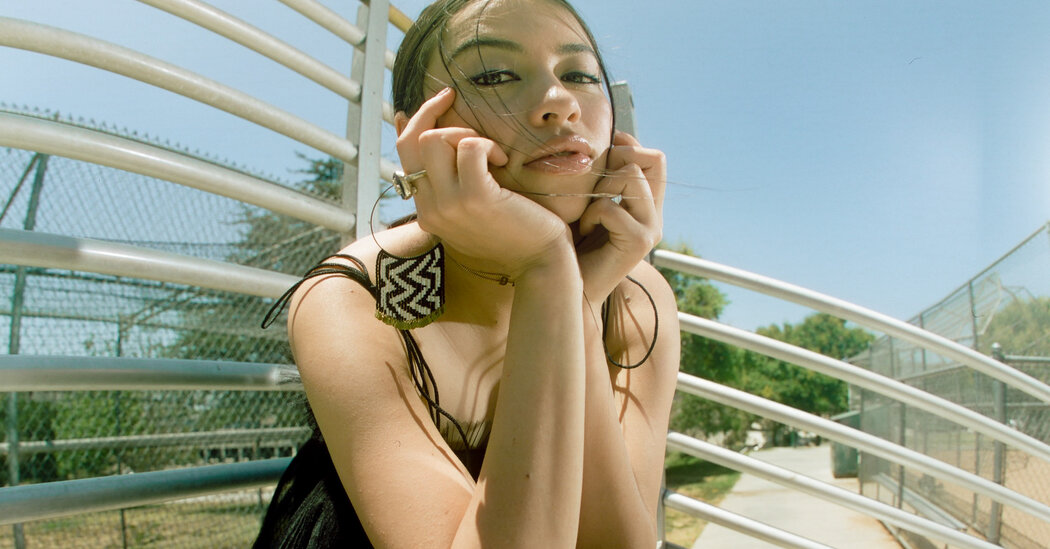 It was the day a grand showdown fight in “Prey” was to be shot, and Amber Midthunder felt awful.

She was ill, and she had lost her voice. The sequence involved the movie’s most physically intensive action, requiring fine-tuned choreography and a rousing finish. And you generally want to be at your best when facing an intergalactic nemesis who has journeyed to Earth to hunt people for sport.

“I really wanted to do it! So I just didn’t talk to anybody all day long,” Midthunder said. “And then we were like, ‘We’ll just try it and see what happens.’”

The steely nerves paid off. On Friday, “Prey,” directed by Dan Trachtenberg, premieres on Hulu with a novel rethink of the “Predator” action series that is set in the early 18th century and doubles as a coming-of-age adventure. Midthunder plays Naru, a young Comanche woman who must prove herself to a tribe that underestimates her.

But there’s no underestimating the 25-year-old actor who is taking on the kind of starring role that isn’t always attainable in Hollywood. As a member of the Fort Peck Sioux tribe, she is the rare Native American female action lead, headlining a franchise that originally rested on the pumped shoulders of Arnold Schwarzenegger.

Not that she feels that way, yet.

“I just feel like an Amber,” she said good-naturedly in an interview last week at a Midtown Manhattan hotel. Even so, the actor — a bright and poised presence in a sunny vermilion dress — acknowledged that “Prey” joins an action-friendly résumé.

Midthunder broke through with her role on “Legion” (2017-19), the hallucinogenic “X-Men” TV spinoff starring Dan Stevens, Jean Smart and Aubrey Plaza. Midthunder’s character shared a body with a scientist played by Bill Irwin. Far from being discombobulating, her experience on the show “solidified” her as an actor, she said, along with a small but inspiring role in the 2016 Texas heist drama “Hell or High Water.” These experiences galvanized her after an earlier stint on a Nickelodeon-style series didn’t suit her. (Though she didn’t mention the title, it sounded a bit like “The Misadventures of Psyche & Me.”)

Her film and television work seems like a triathlete’s preparation for the challenges of “Prey.” She was a regular on the science-fiction series “Roswell, New Mexico” and played a fearless truck driver opposite Liam Neeson in “The Ice Road,” a Netflix thriller about long-hauling on thin ice. She also starred in and co-produced a bruising indie four-hander about two couples, “The Wheel.”

The reviews from her colleagues suggest an already seasoned performer. Irwin, an evident fan, wrote in an email to the Times that their dual role was “the easiest collaboration I think I’ve ever been a part of.” Neeson sent along a concise but definite thumbs-up: “An excellent young actress with a certain energy that stands out.”

Midthunder’s career began with strong family foundations. Her father, David Midthunder, is a fixture onscreen (“Westworld,” “Dark Winds”). She remembers visiting him on the set of productions like “Comanche Moon,” a prequel to “Lonesome Dove.” He met her mother — the casting director and former actress Angelique Midthunder, who was from Thailand — while they were acting in the same movie.

Born on the Navajo reservation in New Mexico, Amber Midthunder grew up mostly in Santa Fe with stints in California and Florida. She remembers hanging out after school at her mother’s office and, from her comfortable perch, watching actors come and go.

“I had a Disney princess tent with an air mattress in the bottom for my eighth birthday,” she recalled. “I was supposed to be doing my homework, but I’d pop my head up and give opinions.”

Midthunder’s father tried to give some perspective on the barrage of images of Native Americans presented by mainstream culture. An enrolled member of the Fort Peck Sioux, he spent much of his childhood on the reservation. His own father worked for the Bureau of Indian Affairs, helping tribe members with paperwork.

“My dad was very intentional in showing me how, from way back, Native people have been shown in media,” she said.

“Prey” features a largely Native American cast — including an impressive first-timer, Dakota Beavers, as Naru’s brother — and a producer, Jhane Myers, who is Comanche and Blackfeet and advised the production extensively. These efforts at representation and authenticity hit home for Midthunder.

“Oftentimes in period pieces we’re boiled down to a hyperspiritualized figure or this violent savage caricature,” she said. “It affects you when you hardly ever see anybody who looks like you or represents you. That does something to your psyche, where you wonder, like, ‘Oh, are we just not good enough? Or is that really how people see us?’”

“Prey” is one of a number of recent productions that prominently feature Native American actors, most notably the critically acclaimed show “Reservation Dogs.”

“It’s a richer, more diverse scene for Indigenous performers,” said Joanna Hearne, a professor at the University of Oklahoma specializing in Native American and global Indigenous film and media studies. “What we’re seeing, along with a surge in Indigenous performers on television, is more opportunities for these kinds of roles in studio genre films, too.” She views Midthunder’s starring role in a studio film as a rare thing.

Still, said the performer Zahn McClarnon, who is of Lakota and Irish descent, “We’re getting more opportunities as Native actors and actresses now than we did before.” The star of the AMC limited series “Dark Winds” who also appeared on “Reservation Dogs,” McClarnon noted that “a lot of big networks and production companies and movie studios wouldn’t take the risk on hiring a lead actor.”

(The original “Predator” casting bears out the longtime Hollywood dynamic of lead-supporting actor: Sonny Landham, a Seminole and Cherokee actor, played one of the ill-fated elite squad members led by the indomitable Schwarzenegger.)

Besides Midthunder’s starring role, “Prey” is notable for its use of language. The movie will be streamable not just in its original English, with some Comanche and French, but also in an all-Comanche version, dubbed by the cast members. (The French is spoken by a band of grungy trappers who figure prominently, and brutally, in the plot.)

But even before “Prey” premieres, Midthunder’s career momentum shows no signs of stopping: She has reportedly been cast in “Avatar: The Last Airbender,” a live-action series on Netflix. Asked if there was anything she could say about the series, Midthunder chuckled and said: “Nothing that I can be talking about right now.”

She saw parallels between her aspiring warrior in “Prey” and her own rise as a star. (“The metaphors are endless!”) But if she felt any pressure at all, she kept a cool head.

“I tried not to think about all that,” she said. “When you get there and you’re doing the work, you know, everything just goes away.”