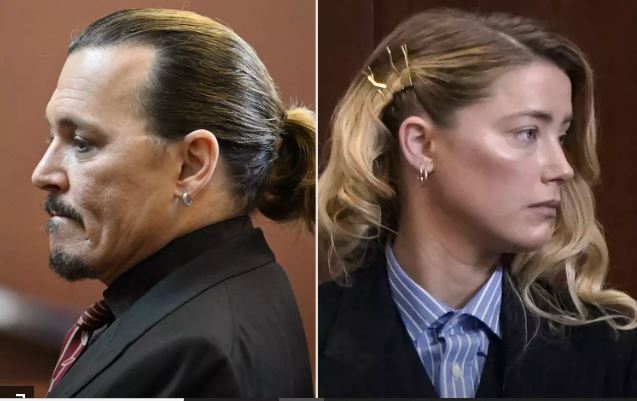 Amber Heard believes one particular piece of evidence that was not allowed in the courtroom during her defamation trial with ex-husband Johnny Depp could’ve changed the verdict.

In the latest segment of her exclusive conversation with Savannah Guthrie for NBC News, airing in full on Dateline Friday night, the 36-year-old actress said, “There’s a binder worth of years of notes dating back to 2011 from the very beginning of my relationship that were taken by my doctor, who I was reporting the abuse to.”

“Her notes represented years — years — of real-time explanations of what was going on,” Heard claimed, after Guthrie, 50, asked whether there was any evidence that wasn’t presented that would’ve made all the difference.

“The judge ruled those notes were hearsay and inadmissible,” Guthrie — whose husband Michael Feldman has done consulting work for Depp’s legal team, though not in connection with Guthrie’s interview — says in a voiceover in the special, from which a preview is available now on Peacock.

A seven-person jury in the Virginia defamation case brought by Depp sided mostly with him in the June 1 verdict, awarding him more than $10 million in damages. They decided that Heard defamed Depp in her 2018 op-ed about surviving domestic violence, even though she didn’t mention him by name in the article. (Depp has maintained that he never assaulted Heard, and claimed she physically harmed him.)

Additionally, the jury awarded Heard $2 million in damages, finding Depp defamed her via his lawyer, one of the three claims she brought in her countersuit. She plans to appeal the verdict.

In a prerecorded deposition played for the court in April, Los Angeles–based therapist Dr. Laurel Anderson recalled marriage counseling she led with Depp and Heard back in 2015.

When asked if there was “violence from Mr. Depp toward Amber,” Anderson replied, “Yes, you’re right. He had been well-controlled, I think, for almost, I don’t know, 20, 30 years. Both were victims of abuse in their homes, but I thought he had been well-controlled for decades. And then with Ms. Heard, he was triggered, and they engaged in what I saw as mutual abuse.”

She also claimed Heard would sometimes initiate the fights in order to “keep him with her” because “abandonment was her worst nightmare.”

Depp’s legal team provided a statement to NBC ahead of Heard’s interview with Guthrie that has aired in segments over the last week, saying, “It’s unfortunate that while Johnny is looking to move forward with his life, the defendant and her team are back to repeating, reimagining and re-litigating matters that have already been decided by the Court and a verdict that was unanimously and unequivocally decided by a jury in Johnny’s favor.”

Prior to news of the tell-all interview, Heard’s spokesperson said in a statement obtained by PEOPLE, “Johnny Depp’s legal team blanketed the media for days after the verdict with numerous statements and interviews on television, and Depp himself did the same on social media.”

“Ms. Heard simply intended to respond to what they aggressively did last week; she did so by expressing her thoughts and feelings, much of which she was not allowed to do on the witness stand,” the spokesperson added.

On Friday, a spokesperson for Heard added in an emailed statement of the actress’s Dateline interview, “If Mr. Depp or his team have a problem with this, we recommend that Johnny himself sit down with Savannah Guthrie for an hour and answer all her questions.”

Watch the full Dateline special Friday at 8 p.m. ET on NBC, or stream it on Peacock the next day.