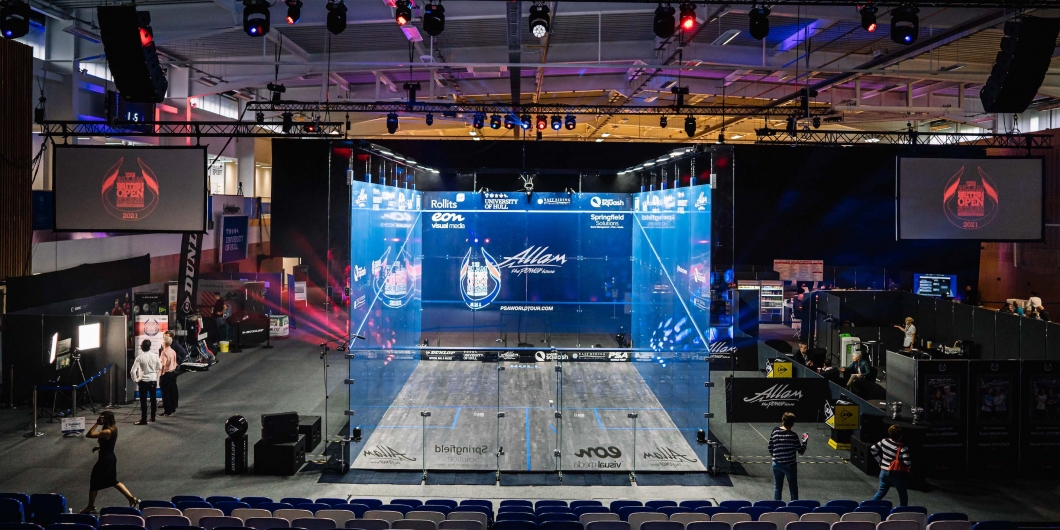 The finals of the 2021 Allam British Open take place at Hull’s Allam Sport Centre today from 15:00 (GMT+1) with two exciting finals set to provide a dramatic conclusion to the 2020-21 PSA World Tour season.

World No.1 Nour El Sherbini and defending champion Nouran Gohar will go head-to-head in the women’s final, while we will have a new name on the men’s trophy as World No.2 Ali Farag and New Zealand’s Paul Coll do battle.

You can watch all the action live from the Allam Sport Centre on SquashTV (worldwide), and the official Facebook page of the PSA World Tour (Indian subcontinent only). We’ll also be live on the channels of contracted broadcast partners around the world around the world.

You can also keep up with the live scores from the event here.

Here’s the Order of Play for tonight The opening match of this afternoon sees El Sherbini and Gohar – the 2018 and 2019 Allam British Open champions, respectively – lock horns, with El Sherbini boasting 13 victories over her fellow Egyptian in 17 PSA meetings.

The pair are no stranger to appearing in the world’s biggest squash matches together, with their most recent meeting coming in the final of the PSA World Championships last month, where El Sherbini completed a 3-1 win to capture her fifth World Championship title.

In fact, El Sherbini and Gohar have contested five PSA finals together, with the former coming out on top on every occasion, including the 2016 Allam British Open final.

It’s not all bad news for Gohar though as she currently boasts a nine-match unbeaten run at the sport’s longest-running tournament and is playing some of the best squash of her career at present.

SquashLevels are predicting that El Sherbini will become the first player to win three Allam British Open titles since the legendary Nicol David in 2008, and they give her a 66% likelihood of taking home the trophy tonight.

But after blowing away both 2017 runner-up Sarah-Jane Perry and Manchester Open winner Hania El Hammamy in the previous two rounds, Gohar comes into the final in some red-hot form as she aims to cause an upset.

We are guaranteed to have a first-time winner in the men’s final as Farag and Coll follow El Sherbini and Gohar onto court for the final match in the 2020-21 PSA World Tour season.

After missing out on last year’s title to World No.1 Mohamed ElShorbagy, Farag will be keen to make amends and currently boasts a 13-match win streak over his New Zealand counterpart.

It’s been a whirlwind couple of months for Farag, with the Harvard-graduate celebrating the birth of his baby daughter shortly before embarking on a second World Championship winning run in Chicago in July.

Despite his title win, he ceded possession of the World No.1 spot to ElShorbagy, but will reclaim that ranking on September 1 after his run to the final, coupled with ElShorbagy’s 3-0 defeat to Coll last night.

Coll had lost nine of his previous 10 matches against ElShorbagy and will be looking to throw the form book out of the window once again when he takes on Farag, who disposed of 2018 Allam British Open champion Miguel Rodriguez last night.

Both players are looking to make history. Coll would be the first male Kiwi ever to win the event and is the first male New Zealander since Ross Norman in 1986 to reach the title decider. Meanwhile, Farag is aiming to become the first man since Jansher Khan in 1996 to win the sport’s two biggest titles in the same year.