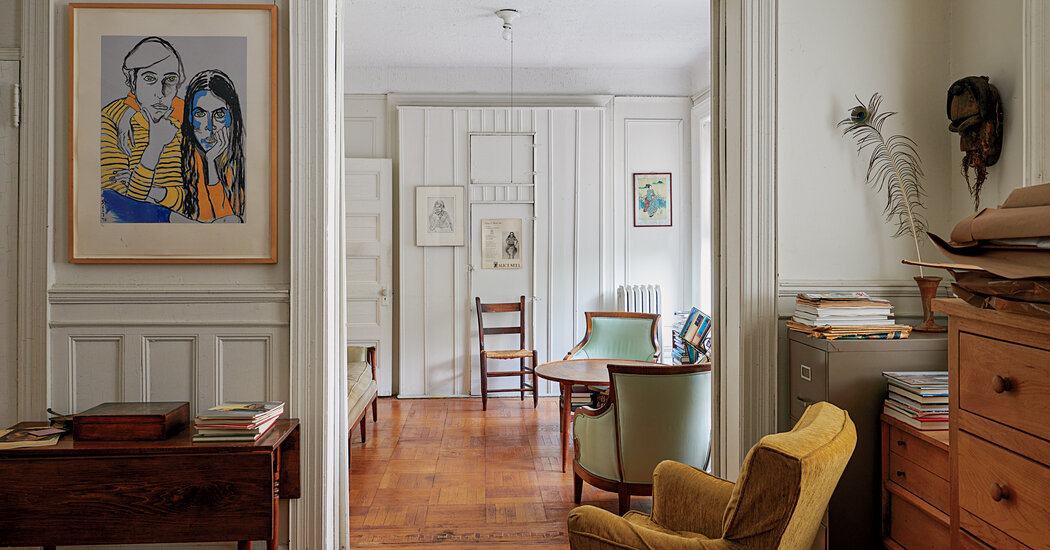 ROOMS AREN’T SO important in an Alice Neel painting; her focus was on people. Her work, which attests to the cleareyed compassion Neel felt toward humans of all walks of life, reveals the deep interiority of her subjects through vivid, almost caricature-like renderings — wide-set eyes, dimpled chins, skin mottled in shades of green or blemished with blue-purple veins and exaggerated, spidery fingers. The settings in her artworks are often mere suggestions: the shade of a blue wall, the outline of a sofa — the room receding while the figure remains.

It can be disorienting, then, to recognize some of those settings in the artist’s final New York City residence — a 1,000-square-foot Upper West Side apartment, into which she moved in 1962 and which has remained largely unchanged since her death in 1984 at the age of 84. In the absence of a person, material details come into sharp relief: The artist’s blue paint-flecked smock hangs from her easel in the front room. Her palette, the globs of pigment now dried into nearly colorless husks, sits nearby on an aging page torn from The New York Times. Familiar furniture — such as the olive green sofa from “Linda Nochlin and Daisy” (1973) and the mustard yellow velvet chair from “Margaret Evans Pregnant” (1978) — is arranged in a circle. A photograph of her by Robert Mapplethorpe, thought to have been taken just days before she died, hangs beside the front door. The apartment is part museum, part time capsule, part home, part communion.

In each of Neel’s New York residences — from Greenwich Village to Spanish Harlem to the Upper West Side — the artist painted her subjects in her home, whether they were celebrities, such as Andy Warhol, or kids from the neighborhood, as in “Two Girls, Spanish Harlem” (1959). As such, her home was always her work space — a necessary collaborator.

The Upper West Side apartment is now occasionally inhabited by Neel’s youngest son, Hartley, 80, and his wife, Ginny, 77. (Neel had four children: Isabetta and Santillana, with the Cuban painter Carlos Enríquez Gómez, Neel’s only husband; Richard, with the Puerto Rican musician José Santiago Negrón; and Hartley, with the photographer and filmmaker Sam Brody.) Hartley and Ginny stay there when they’re in Manhattan (they reside in Vermont) and open the apartment for invited guests, although there are no plans to formally show it to the public. The front room, the sitting room, the kitchen and Hartley’s old bedroom are all much as Neel left them. “I remember coming in the door and she said, ‘Don’t take your coat off. I want to paint you like that,’” says Ginny. “This apartment was alive with Alice.”

Neel’s inimitable portraits — she disliked using that term for her paintings, instead calling them “pictures of people” — are striking both for her choice of subject (Black and Puerto Rican children, pregnant mothers and gay couples — not the people, in other words, adorning gallery walls at the time) and also for their psychological depth. In a 2007 documentary about Neel’s life by the filmmaker Andrew Neel, the artist’s grandchild and the son of Hartley and Ginny, the writer Phillip Bonosky said of her work, “Time doesn’t mark it. You react immediately as though they are alive — as though it were now.” This desire to capture a person precisely as she saw them is what stimulated Neel. As she said of her subjects, “I go so out of myself and into them that, after they leave, I sometimes feel horrible. I feel like an untenanted house.”

THE IDEA OF preserving artists’ homes and studios is not a new one: Splatters of paint still cover the floorboards of Jackson Pollock’s East Hampton, N.Y., studio; Frida Kahlo’s clothes are on display in La Casa Azul in Mexico City; a wall-size bulletin board in Louise Bourgeois’s Chelsea townhouse is covered with her drawings and photographs; Claude Monet’s water garden in Giverny, France, attracts hundreds of thousands of visitors every year; and Francis Bacon’s London studio required an excavation by archaeologists to preserve the thousands of items left to molder. These spaces promise us insight into an artist’s particular genius while reminding us that even they had to deal with life’s mundanities. Walking through Neel’s home, seeing fresh cake and coffee set out on the same table that appears in Neel’s painting “Geoffrey Hendricks and Brian” (1978), one observes that, for Neel, art making and the everyday were always entwined.

Neel grew up in Colwyn, Pa., just outside of Philadelphia. She showed an affinity for painting at an early age, drawing the flowers around her family home. In the early 1920s, as a student at the Philadelphia School of Design for Women, she took a life drawing class; she was among the first generation of American women permitted to study nude models in art school. The artist Robert Henri, who taught there before Neel arrived, was an enduring influence; Henri was a proponent of the Ashcan School, an early 20th-century movement that rejected the gauzy gesturalism of Impressionism in favor of a more straightforward realism. Through Neel’s eyes, that realism would become one in which New Yorkers saw themselves and their city reflected.

For much of Neel’s six-decade career, her interest in figurative painting was considered anachronistic and dated, a failure to keep up with the 20th century’s artistic preoccupations: Abstract Expressionism, Pop Art, postmodernism — anything but portraiture. As such, she made little money from her painting and raised her children on government assistance; the family would hide their telephone and television during welfare inspections (this was at a time when case workers would sporadically drop by to see if any possessions disqualified a family from receiving welfare checks). She was also no stranger to grief; her first child, Santillana, died of diphtheria before she reached the age of 1. (Only two of Neel’s children are alive today: Along with Hartley, Richard also survives their mother, and lives in New York City.) Her second child, Isabetta, was taken back to Cuba by her father when she was 1½. Neel believed they’d be separated for only a month, but mother and daughter didn’t see each other again until Isabetta was 5 years old (they would later become estranged).

Neel’s opposition to the prevailing artistic modes of her time was mirrored in her resistance to the societal norms for women. In 1975, one year after the Whitney presented Neel’s first major retrospective, the critic Laura Mulvey used the term “the male gaze” in her essay “Visual Pleasure and Narrative Cinema,” which gave language to what Neel’s paintings had subverted for decades, suggesting at least one reason her work had been routinely dismissed. Throughout her life, fellow artists condescended to her: Men were embarrassed to be included in group shows that featured her work. (The artist Alex Katz once referred to her as an “angry housewife.”) Middle-class white women in the mid-20th century were expected to either depend on their husbands for financial security or to hold an “appropriate” job, like a teacher or a nurse. Neel did neither.

When she moved to Harlem in 1938, it was yet another rejection of the status quo, seen by some as career suicide. Greenwich Village, where Neel had previously resided, would go on to become the center of the “men’s club for the Abstract Expressionist stuff,” as Hartley calls it. It was where an artist ought to be, or so said conventional wisdom. But Neel, who already felt herself to be an outsider, disliked convention of any kind. “I … hate the conformity of today,” she wrote in the artist Alfred Leslie’s anthology “The Hasty Papers” in 1960, “everything put into its box.” When she moved uptown, she witnessed a greater diversity, an anticonformity that energized her work over decades, whether it was fashionable or not.

In March, the Metropolitan Museum of Art celebrated Neel’s art, as well as her radical humanity, with “Alice Neel: People Come First,” one of the largest retrospectives of her work to date, comprising over a hundred paintings and drawings. This month, David Zwirner gallery, which represents Neel’s estate, will present a collection of the artist’s early works, including streetscapes and portraits, at its West 20th Street space in New York City. Continued and growing interest in Neel’s paintings could be viewed as inevitable — her focus on those who lived on society’s margins speaks directly to our cultural moment — but the advocacy of her family and other supporters has played a vital role in bringing new audiences to her work. Hartley’s own championing of his mother’s oeuvre has been significant in her abiding relevance (his persistence ensured that the Whitney’s plans for a Neel retrospective were realized in 1974, 10 years before she died), and preserving her home is another way to grant the artist the sense of permanence within the canon that she was denied for much of her life.

WHAT NEEL ACCOMPLISHED from inside her apartment feels particularly resonant today, following a year in which most Americans were confined to their homes. Seeing her paintbrushes in an empty Maxwell House coffee can, her lesser-known sculptural pieces positioned on her mantel, her piano in a corner — all attest to a creative energy that endured years without much attention or validation. It is for more than posterity, however, that Neel’s home has been kept as it is. “It is very hard to let go of your mother,” Hartley says. This, perhaps more than anything, is the reason Neel’s paints remain drying on the table. Hartley says he had always wanted to preserve the apartment, but Ginny recalls it differently: “It just kind of happens that you don’t go through the closet,” she says. “You just keep putting it off, and then it becomes, ‘Why change it?’ We really couldn’t give her up.”

In 1970, after Ginny and Hartley’s wedding, Neel set up her easel in her son’s old bedroom to paint an empty chair sitting near the north-facing window. She titled the painting “Loneliness,” and considered it a self-portrait. Neel’s legacy is her ability to capture the presence of her sitters, a quality still alive in her vast body of work. But the apartment, like other artists’ spaces, is a record of absence, the detritus of a life preserved after the living is done. Neel understood this absence as an essential part of our humanity, too — the sense of loss once everyone has exited the room; nothing left but a chair against the window, loneliness and the desire to hold on to what is lost.