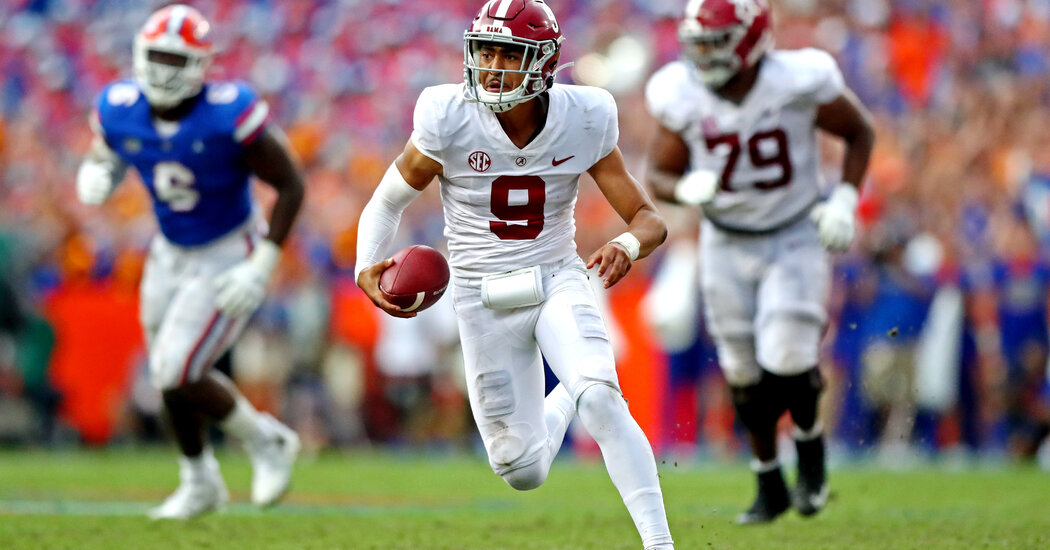 GAINESVILLE, Fla. — Ben Hill Griffin Stadium has quieted down. A game that was much closer than many expected had the Gators’ fans permeating the air with deafening chants as they made one last effort to will their team past the Alabama Crimson Tide.

This 31-29 defeat of the Gators has confirmed what the Crimson Tide football team already knew, and what their opponents feared: This Alabama program that disemboweled Ohio State just nine months ago is recharged and has its eyes on its next national title.

But Saturday’s showing was far from perfect for the Crimson Tide. They committed 12 penalties for 87 yards. They left their run game in Tuscaloosa, gaining only 91 yards on the ground. They made mistakes down the stretch that prevented them from pulling away from the Gators, like when receiver Slade Bolden dropped a surefire touchdown in the center of the end zone in the third quarter.

The Alabama defense, which allowed just 135 yards on the ground against Miami and Mercer, surrendered 258 yards to the Gators, including a 17-yard touchdown run by Dameon Pierce, the running back who waltzed into the end zone nearly untouched late in the fourth quarter to bring Florida within two points of completing a comeback.

A failed Florida two-point attempt followed that play, however, stalling the Gators at a two-point deficit and ultimately locking them out of the upset.

What separates Alabama from almost any other team in the country is its ability to defeat opponents on off days like Saturday.

Not that one would discount a Nick Saban-led team heading into any season — Alabama was ranked No. 1 in The Associated Press Top-25 preseason poll — but this isn’t the same team that defeated the Buckeyes in the 2020 College Football Playoff championship game. Ten of the players who suited up for that game now play in the N.F.L. Typically, teams with that kind of roster turnover see varying degrees of decline the next season. They certainly wouldn’t be expected to be in playoff contention.

Last season, L.S.U. hardly resembled the dominant 2019 team that powered through the Southeastern Conference on its way to a 15-0 season and a win in the College Football Playoff. It lost 14 players to the N.F.L. a few months later, including quarterback Joe Burrow, running back Clyde Edwards-Helaire and receiver Justin Jefferson, and limped to a 5-5 record in 2020.

Alabama’s ability to churn out N.F.L.-ready talent seemingly every season, while other teams spend years recruiting and building to that point, is what has created a gap between it and many others. And if Saturday’s game was any glimpse at what’s to be expected from the Crimson Tide in conference play, it appears that Saban has once again assembled a team poised to make another College Football Playoff appearance.

“I talked about it when I got here,” Florida coach Dan Mullen said after the game, referring to when he took over the program in 2018. “I want a team that can compete for championships on a consistent basis. And to do that, you’re going to have to beat Alabama.”

Throughout his 15-year tenure in Tuscaloosa, Saban and his staff have shown a perennial ability to recruit and field talent at a rate seemingly unrivaled by even the most successful programs in the nation.

Mike Locksley, Maryland’s coach and a former offensive coordinator under Saban, said in an interview this year that he believed Alabama’s embrace of a dazzling air game had helped the program attract a larger number of talented players in the years after stars like Julio Jones electrified Tuscaloosa.

“I would venture to say that had they still been turning around and handing off to the running 45, 50 times a game, it makes it tough to recruit skilled receivers,” he said. “But I think the numbers that guys like Julio put up and Amari Cooper put up and then obviously Calvin Ridley put up, it created this mind-set that you can go there as a receiver and still put up numbers in that style of offense, and it allows you to recruit more guys with that type of skill and that type of skill set, which then opens up your offense to be as diverse as they’ve become.”

The Crimson Tide have never had a losing season under Saban and have avoided regressing, successfully reloading their roster every year. Saban’s program has signed the nation’s top recruiting class in eight of the last 10 seasons. It came in second to Georgia in 2020 and 2018.

“Obviously, coach Saban and his staff are the best recruiters, and they do an excellent job with the team attitude also,” said Steve Spurrier, who won the Heisman as Florida’s quarterback in 1966.

Spurrier pointed to the crowd as Florida’s biggest advantage heading into Saturday’s matchup. Though Saban said after the game that he thought the sophomore quarterback Bryce Young managed the game well despite the crowd noise, the 90,000 fans in their home stadium, known as the Swamp, certainly made a difference in the game, forcing Saban’s typically disciplined team to commit mistakes.

Saban told reporters that some of the team’s errors were a result of issues with the snap count.

“The center had trouble hearing a couple times and snapped the ball late,” Saban said, adding later: “All in all I think there’s a lot to learn. I’m hopeful that our team can learn from this experience.”

Florida’s defense, which had been much maligned in 2020 and in the first two games of the season, forced Young into some uncomfortable throws, leading to incompletions that riled up the Florida fans in attendance. But Florida’s offense consistently missed opportunities to take advantage of those missteps, and Alabama’s offense did just enough to stay ahead.

“Our guys expected to win the game today,” Mullen said, adding, “When you play in championship-level games, the margin for error is going to get extremely small.”