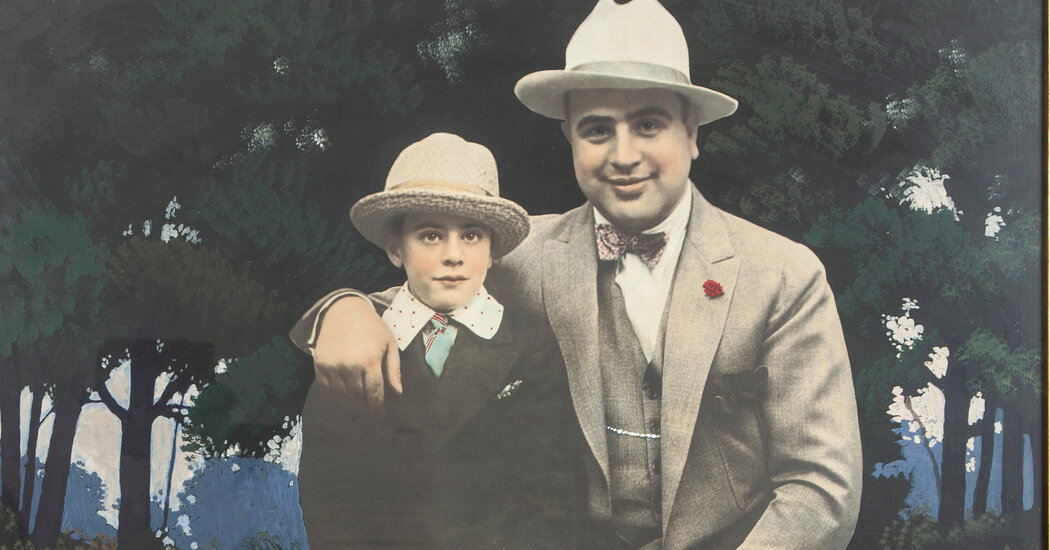 The first items listed for sale on the auction site listing the possessions of Al Capone portray a loving family man.

There is a black and white picture of him and his mother beaming at each other. Then there is a gilt-framed picture of the mobster with his arm around his only child, Albert Francis, both of them nattily dressed in fedoras and crisp suit jackets.

Keep scrolling through the possessions for sale on the Witherell’s Auction House website, however, and more sinister items appear, reminding potential buyers that while Capone might have been known as Papa to his grandchildren, he was also a violent mob boss, the man believed to have ordered the St. Valentine’s Day Massacre, in which seven men were killed in a Chicago garage by gangsters posing as police officers.

The collection, called “A Century of Notoriety: The Estate of Al Capone,” also features several of his firearms, including a 1911 Colt .45 pistol, described as Capone’s favorite. Live bidding won’t open until Oct. 8, but there are already two six-figure offers for the Colt, said Brian Witherell, founder of Witherell’s.

It is a sign of the continued fascination with a mobster who has been dead for more than 70 years.

“This is going to be a big one,” Mr. Witherell said. “We’ve been at this long enough to know what gets traction, but this is exceeding our highest expectations.”

Capone, known as Scarface, died of complications from a stroke and pneumonia in January 1947 in his villa in Palm Island, Fla. He was 48.

His possessions remained in the family and eventually went to the four daughters of Albert Francis Capone, who was known as Sonny.

One of the daughters, Diane Capone, said she and her two surviving sisters, who all live in and around Auburn, Calif., had decided to sell the possessions because they were growing older and because they feared what might happen to the items if the wildfires that have recently torn through Northern California forced them to flee quickly.

“We’ve spent the last two summers with our suitcases by the door,” Ms. Capone said.

The items, 174 in total, also include furniture, watches, a white-gold matchbook cover that Capone used to store matchsticks for his cigars, and a letter he wrote to Sonny Capone from prison. Also for sale are pieces of Capone’s jewelry, including diamond stick pins and a flamboyant tie bar with the word “AL” encrusted in diamonds.

Ms. Capone, 77, said she realized that “there is a tremendous chasm” between her grandfather’s private life and his public life, which has been detailed in newspapers, movies and books.

“Do I know that he was responsible for a lot of bad things, or ordering his people to do bad things?” she said. “Yes, of course. But I’m also aware of the fact that the man had multidimensional characteristics. He was able to compartmentalize his public life from the life he led as a family man.”

Ms. Capone was 3 when her grandfather died, but she said she had clear memories of him reading to her, holding her in his lap and guiding her through the gardens of the villa, pointing out flowers and figurines as she clutched his fingers.

“He was very, very affectionate,” she said.

Capone, the son of Italian immigrants, grew up in Brooklyn and was inspired to become a gangster as a teenager, according to a biography by Deirdre Bair. He was a shoe shiner who observed mobsters shaking down local merchants and decided to start his own gang.

As an adult, he built his empire selling liquor during the Prohibition era, the period between 1920 and 1933 when alcoholic beverages were outlawed in the United States.

He made about $100 million a year, according to researchers at Harvard Business School, who said his strategies reflected the “destructive forms of American entrepreneurship in the early 20th century.”

Capone is believed to have been behind more than 200 deaths, including the death of a prosecutor. The culmination of the gang wars in Chicago between Capone and his chief rival, George Moran, also known as Bugs, occurred on Feb. 14, 1929. Seven men, most of them part of Moran’s gang, were inside a garage when four men burst in and announced a raid. They ordered the men to line up against the wall and shot them.

Capone, who was vacationing in Florida, was not arrested, and some have expressed doubts that it was Capone who ordered the hit. He was never convicted of murder but was sentenced in 1931 for tax evasion and served seven years and a half years in federal prison.

During his incarceration, he deteriorated significantly because of paresis, a partial paralysis resulting from syphilis, according to the F.B.I.

When he was released, he was admitted to a hospital in Baltimore and then went to his estate on Palm Island. “He had become mentally incapable of returning to gangland politics,” the F.B.I. said.

Ms. Capone said she doubted that theory and believed that her grandfather had been content to leave his former life behind him.

She said her grandmother had once described how former associates came to visit Capone after he had returned from prison. When they left, Capone’s wife heard them say, “He’s crazy as a bedbug,” Ms. Capone said.

“My grandmother mentioned this to my grandfather, and Papa’s quote was: ‘Let them think what they want; it’s my ticket out,’” Ms. Capone said.

Sonny Capone eventually dropped the Capone name and moved to California. All of his daughters pursued careers in business or education, married and had children, dropping the Capone name in favor of their husbands’ last names.

“It wasn’t that we were trying to live secretive lives,” Ms. Capone said. “We just lived quiet lives.”

Ms. Capone said she had gone back to her maiden name when she published a book about her grandfather based on the memories of his widow, Mae Capone.

She said she planned to give part of her proceeds from the auction to charities, like the local food bank. It was the type of charity her grandfather, who sponsored soup kitchens during the Great Depression, supported.

Ms. Capone said the dichotomy would always mystify her.

“I don’t have a clue how a person would be capable to live the public life that he did and be the family man that he was,” she said.