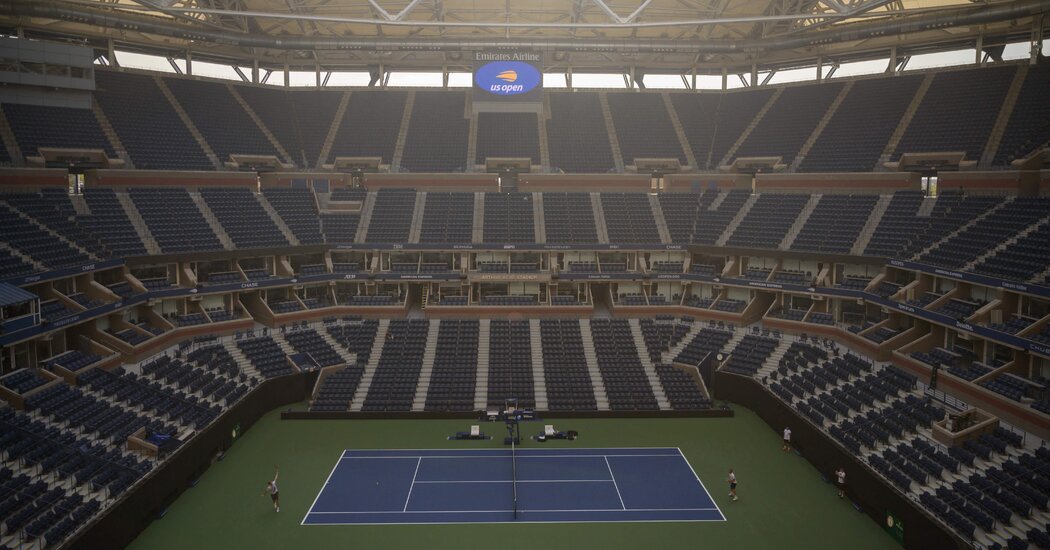 The U.S. Open welcomed almost 750,000 fans onto its grounds in 2019 during its two-week run, and comparable numbers are expected to attend this year.

But two years ago, there was no coronavirus pandemic. Last year, the tournament was held without fans, and this year the United States Tennis Association will allow them back into what could be one of the most heavily attended mass gatherings in New York since the pandemic began in 2020.

With the tournament set to begin in earnest on Monday, the U.S.T.A. issued protocols for fans and players on Tuesday, and the policies are far more relaxed than they were last year.

No proof of vaccination or a recent negative coronavirus test will be required for fans to enter the grounds, and no masks will be required when they are outdoors. It is “recommended” that unvaccinated fans wear masks outdoors, according to guidelines issued by the Centers for Disease Control and Prevention.

Much of the event is held outdoors, and the two roofed stadiums — Arthur Ashe and Louis Armstrong — will be considered outdoors, too, even if the roofs are closed. That is because the stadiums’ ventilation systems are considered adequate, U.S.T.A. officials say.

Brian Hainline, a physician and a member of the U.S.T.A.’s medical advisory board who is also the chief medical officer of the National Collegiate Athletic Association, said the protocols for fans and players had been developed with the approval and consultation of New York City health officials.

Players will be granted more freedom of movement than they were given last year, when many complained about isolation because they had been sequestered in a hotel in Long Island. All players will be tested upon arrival and then tested every four days after that. If they test positive, they will have to withdraw from the tournament, regardless of what stage the event is in, according to Stacey Allaster, the tournament director.

The player would also have to go into isolation for 10 days at his or her hotel or accommodation.

The main draw begins on Monday, but the qualifying rounds started Tuesday, without fans. Traditionally, the qualifying event attracts many local tennis enthusiasts, who can attend for free. That is not the case this year, because with so many players on site at once, extra space was needed on the grounds to accommodate them without crushing everyone into the same locker rooms.

But once the main event begins, it will almost be business as usual, with maskless fans roaming the grounds and sitting next to one another, much as it has been with New York City’s two baseball teams, the Mets and the Yankees.

Dr. Hainline said that some of the strategy behind the relatively relaxed protocols had been derived from monitoring the situations at the two baseball stadiums, which opened to full capacities in June.

Fans without proof of vaccinations will be required to wear masks while eating or shopping indoors and must take food outside to eat.

Dr. Hainline added that even though masks would not be required for unvaccinated fans outdoors, he encouraged those who have not been vaccinated to wear them while at the tournament. But he also knows that not all will and that not all transmission of the virus can be avoided at a huge event like the U.S. Open.

Players who are not vaccinated are encouraged to wear masks everywhere when not practicing or competing. If they come into close contact with someone who has the coronavirus, they will be required to go into quarantine. Vaccinated players may not have to go into quarantine after such contact, depending on recommendations from tournament physicians. That means an unvaccinated player who hasn’t tested positive, but who has been in close contact with someone who has, may have to withdraw from the tournament.

The U.S.T.A. said it was still gathering data on how many players had been vaccinated, but Dr. Hainline indicated that number was well below the 85 percent rate he said that N.C.A.A. student-athletes in all sports had achieved. Last week, Stefanos Tsitsipas, the third-ranked player on the men’s tour, said he had not been vaccinated and did not see a reason for people his age (he is 23) to be.

Dr. Hainline, clearly trying to be diplomatic, dismissed Tsitsipas’s reasoning and pointed out that the Delta variant that is spreading across the globe is affecting younger people more than earlier forms of the virus did.

This year, players will be put up in two hotels in Midtown Manhattan, as opposed to a more isolated hotel on Long Island, where most were lodged last year. Allaster said tournament organizers had heard “loud and clear” from the players that the isolation — not only during last year’s event, but throughout 2020 — was difficult to bear. So the protocols allow for some flexibility away from the event grounds. Players can book tables at restaurants, attend theater events and mingle with the public at large. Allaster said New York’s vaccination rates and the advice of public health officials had given the U.S.T.A. confidence that the tournament protocols would be sufficient. But visitors from all over the world, not just New York, regularly attend the U.S. Open.

“Each of us, every day, is living with the virus,” she said. “It is therefore our collective responsibilities on how we do it, with the protocols put in place.”