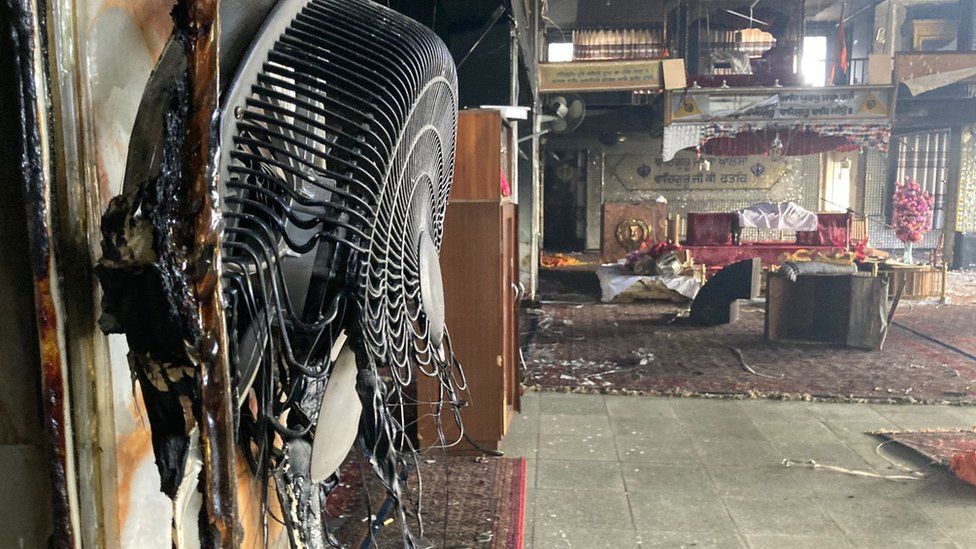 Militants opened fire outside the fortified doors leading to the compound housing a Sikh gurdwara, as well as the homes of members of the community.

The assailants killed the security guard, and armed with grenades they managed to make their way inside, whilst Taliban members stationed at nearby checkpoints rushed after them.

“My house is just in front of the gurdwara, as soon as I heard firing I looked out the window, people were saying attackers are inside,” Kuljit Singh Khalsa told the BBC. “It was chaos, then all of a sudden there was a blast from outside.”

A bomb hidden inside a car, parked next to a Taliban checkpost, had been detonated, killing the unit’s commander and ripping through the surrounding shops and homes.

The attack had begun around half and hour before daily morning prayers were due to start. “If it had been later, there would’ve been even more people inside,” Mr Khalsa said.

Afghanistan was once home to tens of thousands of Sikhs and Hindus, but decades of conflict have seen the number dwindle to a tiny handful.

In recent years, those who have remained have been repeatedly targeted by the local branch of Islamic State (IS) militant group.

In 2018, a suicide bomber struck a gathering in the eastern city of Jalalabad, whilst another gurdwara was attacked in 2020.

“At the time of the attack in Jalalabad, there were around 1,500 Sikhs, after that people thought, ‘We can’t live here’,” Sukhbir Singh Khalsa said. More left after the attack in 2020, he, added, and by the time the Taliban took power last year, there were less than 300 Sikhs. Now there are just around 150.

“All our historical gurdwaras have been martyred already, and now the only one that was left has been, too.”

So far, there has been no claim of responsibility but it appears likely that IS was also behind this latest attack.

Afghanistan’s Shia and Sufi Muslim minorities have also repeatedly been targeted by the group.

IS is much less powerful than the Taliban and does not control any territory, but has been responsible for some of the deadliest attacks in the country’s history.

Overall, levels of violence in Afghanistan have fallen dramatically since the Taliban returned to power – ending their insurgency – but IS is undermining the Taliban’s promise to have finally brought security to the nation.

Khalid Zadran, a spokesman for Kabul’s police force, told the BBC that targeting civilians showed the “cowardly” nature of the attackers.

“Our comrades have sacrificed their lives for the Sikh community, it is their right under an Islamic state to be protected,” he added.

All the attackers were killed around three hours after the assault began, during which time intense gunfire and multiple explosions could be heard. At least one Sikh man and one member of the Taliban’s security forces were killed.

Wandering through the still smoking wreckage of the Gurdwara, Sikh community members said they were grateful for the Taliban’s help in bringing the attack to an end, but that they did not feel safe and wanted to leave the country.

“We’ve appealed a lot to the Indian government, to find a way to give us visas, we don’t want to live here anymore,” said Sukhbir Singh Khalsa.

“Those of us left here are only here because we don’t have visas, no-one wants to stay here. This has happened now, tomorrow it will happen again, and then again after that.”