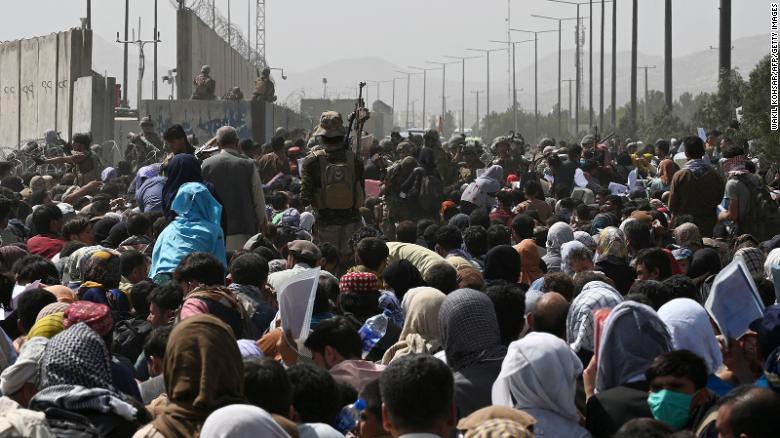 The sudden fall of Kabul and the Taliban’s near-total takeover of Afghanistan has left many of America’s long-standing partners wondering what will become of the values-based, US-led international order.

While President Joe Biden’s withdrawal of troops by August 31 is inevitable, the speed at which the situation descended into chaos, and the White House’s lack of contrition and flexibility has left allies spinning.
On Tuesday, Biden’s fellow G7 leaders, led by British Prime Minister Boris Johnson, pressed the US President to extend that deadline in order to get foreign citizens, Afghan people who have aided allied troops and other vulnerable groups out of the country. But Biden stood firm.
As America’s allies — most notably in Europe — see it the United States is walking away, washing its hands of a crisis it played a large part in creating, and with scant regard for the problems that doing so creates elsewhere.
As one senior European official told CNN: “When America reversed course on Syria, it sparked a crisis in Europe — not the US.”

As CNN has reported, the fall of a stable Afghan government and subsequent triumph of the Taliban is not necessarily a good thing for China and, in some respects, presents more of a headache that anything else.
However, the early stage at which China met with Taliban leaders confirmed the perception, at least in the eyes of America’s European allies, that China is ready to capitalize on the void left by the US — if unlikely to fill it militarily. Based on current reports from Afghanistan, how the Taliban achieves stability now is unlikely to meet the Western human rights standards — but might not pose an obstacle to Beijing’s support, given China’s own poor record on human rights.

Russia has also made overtures to the Taliban in recent days, with its foreign ministry saying it would not evacuate its embassy as Kabul fell. Though the Taliban is — at least on paper — officially proscribed by Moscow, the Kremlin does have working contacts with the Taliban, who, it claimed, have “started to restore public order” since seizing power.
This is the same Russia that supported stability in Syria by providing its brutal president, Bashar al-Assad, with firepower and aiding in airstrikes against rebel groups. Russia has denied this, saying it was exclusively targeting ISIS.

Rightly or wrongly, the US’s commitment to withdraw by such a hard deadline will be seen as the catalyst for the Taliban taking control of the country. How it handles the consequences of that will likely color how both its allies and its enemies view the US’s legacy in Afghanistan.
Leslie Vinjamuri, director of the US and the Americas Programme at Chatham House, says people will “judge the US in Afghanistan based on how it manages the unfolding humanitarian situation, whether it takes large numbers of immigrants, what kind of humanitarian assistance it commits to.”
She adds that if “Afghanistan descends into a failed state or a grave humanitarian crisis unfolds, many people will blame the US, rightly or wrongly. And undoubtedly this will feed into the narrative of US hypocrisy when it comes to human rights.”
By extension, that blame and those accusations of hypocrisy, will also land at the feet of the Western allies who, once the US decided it was time to leave, had no choice but to go too. And that provides one hell of an opportunity for those who wish to take the West’s place on the world stage — without the moral obligations.
Taliban fighters stand guard in front of the Hamid Karzai International Airport, in Kabul, Afghanistan, Monday, Aug. 16, 2021.

The fight for Afghanistan may be over, but some believe there is still work for the West to do.
Tom Tugendhat, a British lawmaker who served in Afghanistan and chairs the Foreign Affairs Select Committee, thinks that the Western alliance still has a role to play in Afghanistan — one which will have global implications.
“We can invest in the UN and start and use its programs to support the Afghan people,” Tugendhat said. “We can bring in regional partners in India, Pakistan, Uzbekistan and others to work together. The Taliban isn’t universally popular, but it is inspiring others. Islamist groups in Africa and in Asia are drawing inspiration and we need to work with partners around the world. We need to start acting internationally.”
The reputational cost to the West of what’s happening in Afghanistan won’t be fully known for some time. What is clear for now is that if America’s allies want the option to serve their own interests globally, they need to accept that as things stand, they are inadequate.
That means countries that have for so long relied on the stability of the US commitment to promoting Western values will need to rethink their foreign policy.
If Mark Leonard is correct, and this really is the end of a geopolitical era, those countries will need to refocus their priorities on a new, scary basis: That the US simply isn’t that interested anymore.