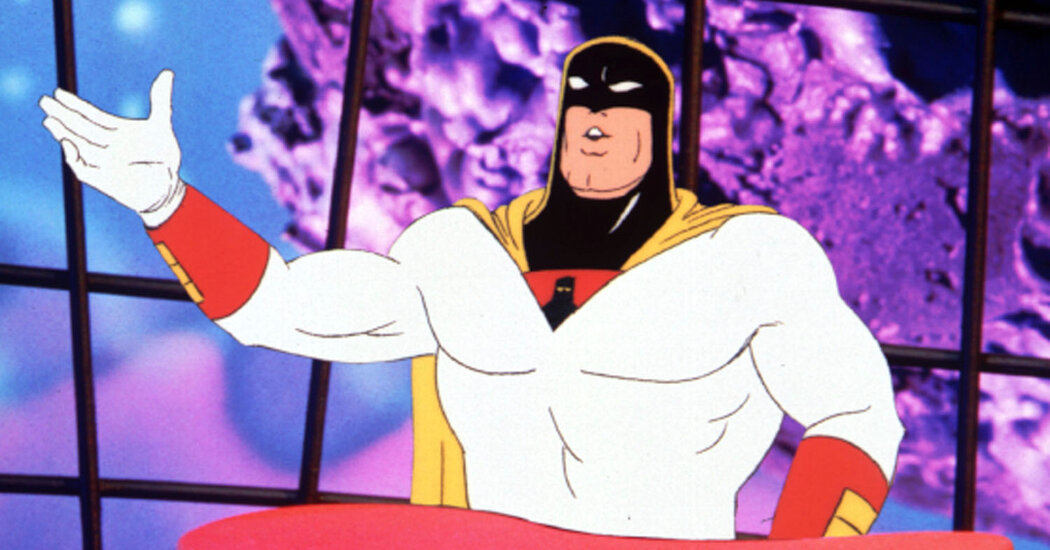 By all accounts, it was a minor miracle that Adult Swim ever made it off the drawing board 20 years ago. Money was next to nonexistent. The editor of Cartoon Network’s first original series worked from a closet. A celebrity guest on that series, unaware of the weirdness he had signed up for, walked out mid-taping.

In retrospect, it seems right that one of modern TV’s most consistent generators of bizarro humor — and cult followings — had origins that were, themselves, pretty freewheeling.

“It was really just a labor of love,” Mike Lazzo, who oversaw programming for Adult Swim before he retired in 2019, said. “I think the audience could tell that and responded to it.”

Early on, the idea was to create a late-night programming block for Cartoon Network’s sizable adult audience. What resulted was a hit, and over the years, Adult Swim’s early lo-fi aesthetic — as much a necessity as a choice, Lazzo said — attracted ambitious, out-of-the-box ideas, including an animated show starring a talking wad of meat (“Aqua Teen Hunger Force”), a cheesy talk show hosted by a Hanna-Barbera superhero (“Space Ghost Coast to Coast”) and a surreal, live-action satire of clumsy public-access TV (“Tim and Eric Awesome Show, Great Job!”).

“We wouldn’t have fit in anywhere else,” said Tim Heidecker, who with Eric Wareheim created “Awesome Show” and has worked on several other Adult Swim series since. “There’s no other place on TV that made sense for us, and maybe that’s still the case.”

Ahead of the 20th anniversary of Adult Swim’s Sept. 2, 2001, premiere, its creators, leaders, writers, animators and others spoke about the lean early days, the anything-goes atmosphere and the enduring legacy of their ambitious experiment. These are edited excerpts from the conversations.

In the early 1990s, Cartoon Network found itself in an unusual situation: It controlled a sprawling animation library but didn’t have the budget to make animated shows of its own. Then a group of executives and cartoonists, led by Lazzo, proposed the idea of recycling the animation from Hanna-Barbera’s 1960s “Space Ghost” cartoon. They reimagined the titular superhero as a cheesy talk show host who interviewed real celebrities in a new show, “Space Ghost Coast to Coast,” which became the network’s first original series when it premiered on April 15, 1994.

MIKE LAZZO (former executive vice president and creative director of Adult Swim) I got fed up reading over and over that we were nothing but a Hanna-Barbera rerun channel — which was, of course, true.

BETTY COHEN (founding president of Cartoon Network) Mike Lazzo booked some time to come see me one day and said, “I want to show you something my team and I have been working on.” He put a VHS cassette into my machine, and it was the first incarnation of “Space Ghost.” It was so rough that there were times when he was having to personally narrate, and it was all on a rotoscope, which is sort of like cutting and pasting. But I immediately saw the potential. For the earliest funding, I actually allocated money from the marketing budget.

LAZZO We went to Los Angeles and hired a reputable production house to make a pilot, which cost us $100,000, but we got it back and hated it. We were like, “This looks good, but it isn’t funny.” So we brought it back to Atlanta and did it ourselves for $25,000. Michael Cahill [now the vice president of on-air and social media for Adult Swim] would edit it in a closet that was just sitting empty.

DAVE WILLIS (co-creator of “Aqua Teen Hunger Force” and “Squidbillies,” writer on “Space Ghost Coast to Coast”) We did the interviews over speaker phone, and we’d immediately ask guests the craziest stuff we could come up with — are you getting enough oxygen? What are your superpowers? Paul Westerberg [the musician and member of the Replacements] had never seen the show and walked out on me. He was like, “I don’t have time for this B.S.” That was when we started getting people to sign the waiver before they’d do the interview.

The show gained a cult following among teens and young adults. Around 1998, Cartoon Network executives began thinking about another conundrum: how they could fill their ad space late at night, after young viewers went to sleep.

MICHAEL OUWELEEN (president of Adult Swim) We started to notice that, at any given time, a third of the people watching Cartoon Network were adults who weren’t parents.

LAZZO Our ad department could not sell late-night or overnight time periods on Cartoon Network — no one wanted to advertise to kids after 10 p.m.

COHEN The question was, how could we appeal to a young adult audience without destroying our relationship with parents?

Lazzo, who oversaw programming for the network, saw the potential of creating a late-night block of shows geared specifically toward adults.

JIM SAMPLES (general manager and executive vice president of Cartoon Network when Adult Swim launched) Mike came into my office with a deck he’d put together, describing how he was going to produce all the on-air packaging for Adult Swim on practically zero budget, basically on someone’s computer. All the money that was being spent on fairly high-end packaging for the network, he wanted to divert to original programming. I was blown away by the idea. But we were dealing with resistance from our ad sales team. As a kids’ network, how were we going to actively market to adults? Was it a violation of our contract with cable operators? I put my career on the line to say it was a good idea.

OUWELEEN We were given one year to name this thing, brand it and make the content — it was like a gauntlet thrown down. It was a very small group of us doing all of that in addition to our regular jobs at Cartoon Network. I can’t tell you how complicated it was. The creative team I was running came up with four names: “Aviso,” which means “warning” in Spanish; “Parental Block” — on cable boxes at the time, you could set the parental block to stop kids from watching stuff; “Insert Quarter,” like a video game; and Adult Swim. Lazzo always hated the name.

LAZZO Blech! To this day, I hate that name. I still think it should be called “Cartoon Network After Dark.” Adult Swim is too clever by half for my taste.

The first promotions for Adult Swim, which aired late at night, featured older adults swimming in a public pool, with a voice-over by a lifeguard: “Sundays at 10, it’s all kids out of the pool for adult swim.”

OUWELEEN We wanted to send a definitive signal to kids: “This is not for you.” That’s why we chose old people at the pool — to scare kids away. We filmed an old-person aerobics class at the M.L.K. Natatorium here in Atlanta, and then we made [some of the footage] black-and-white to make it even more unattractive.

Some of the first original Adult Swim shows, including “Space Ghost Coast to Coast” and “Harvey Birdman, Attorney at Law” were parodies or remixes of Hanna-Barbera superhero cartoons. Another, “Aqua Teen Hunger Force,” drew its heroes from fast food.

WILLIS The idea for “Aqua Teen Hunger Force” started with a [expletive] fast food restaurant that tried to use all the scraps of meat they weren’t allowed by the F.D.A. to put into a hamburger, wadded together. We saw Meatwad as this poor, neglected creature — I think his line in his first script was like [in Meatwad voice], “Please, God, kill me.” I did the voice, and I can’t tell you how many times people said, “I don’t understand what he’s saying; you need to recast him.” But we stuck to our guns. I always thought of it like Willie Nelson, who sings real quietly, and so everyone is on the edge of their seat trying to listen to what he’s saying. As a result, you’re more into it. At least, that was my excuse! [Laughs.]

Adult Swim officially debuted on Sept. 2, 2001, and aired two nights a week from 10 p.m. to 1 a.m. It kicked off with a new episode of “Home Movies,” a series that had been canceled midseason on UPN. The show, which featured the voice talents of H. Jon Benjamin (“Bob’s Burgers”), developed a devoted following during its second life on Adult Swim, as did other shows, like “Family Guy,” later on.

WILLIS We were beating all the networks in the most prized demographic: men with money to spend. I distinctly remember bumping into the guy running ad sales in the bathroom. He said something to the effect of, “Wow, you really pulled that [expletive] out of the fire!” I was like, “What do you mean?” And he said, “I saw that thing [“Aqua Teen Hunger Force”] and I can’t believe I have to promote it as one of our new shows, but you guys really turned that around.” It was good to know we were thought of so highly. [Laughs.]

The Adult Swim audience grew, and the block expanded. The shows got weirder and more experimental as they branched out from animation to live-action shows like the influential “Tim and Eric Awesome Show, Great Job!” (2007-10). Heidecker and Wareheim previously had created the similarly eccentric animated series “Tom Goes to the Mayor” (2004-2006) for Adult Swim.

LAZZO After “Tom Goes to the Mayor,” Tim and Eric could pretty much come in and tell us what they wanted to do. And with “Awesome Show,” we knew when we were watching it that this was like no sketch comedy we’d ever seen. It changed the tempo of comedy and influenced so many young comedians. The editing style alone became pervasive.

TIM HEIDECKER We never took the writing part that seriously. We’d gather people for a couple of days and sit around and pitch very loose ideas, and then Eric and I would map out the kinds of bits we wanted to do. I hear about these writers’ rooms that are, like, 12-hour days, trying to break every joke and write everything ahead of time, and we were just like, “That’s a fool’s errand.” Give us something to start the process, and we’ll go from there.

ERIC WAREHEIM That continued into the editing. There were moments we’d laugh so hard we’d literally cry because we loved our work so much. We were doing things we’d never seen before in comedy or on TV.

HEIDECKER It seemed good at the time — we probably should’ve kept doing it.

Twenty years later, Adult Swim airs seven nights a week. The lineup includes shows like “Rick and Morty,” which has won two Emmys for best animated series, and “Tuca & Bertie,” a critical darling that was rescued from oblivion after Netflix canceled it.

OUWELEEN We joke that Covid finally put to bed every story headlined “Is adult animation a thing?”

WAREHEIM We’re working pretty much the same way we worked 25 years ago — we get lunch and talk about ideas, and if we laugh, we write it down. If we don’t, it disappears.

LAZZO I used to tell people I could ruin Adult Swim in two weeks — put on the wrong programs, be crass in the presentation. You can’t be greedy; you have to do things for the right reasons and not because they sell. As long as that remains the lamp, Adult Swim will continue forever.