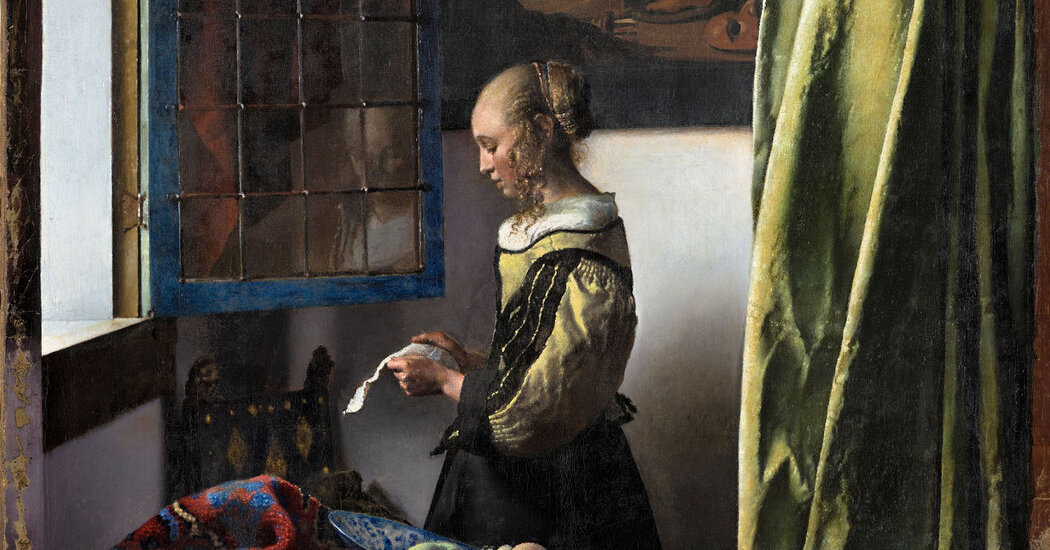 DRESDEN, Germany — After nearly three centuries behind a layer of paint, a naked Cupid has surfaced in one of the world’s best-loved artworks, drastically altering the background of a quiet interior scene.

The plump, golden-locked god in Johannes Vermeer’s “Girl Reading a Letter at an Open Window,” was revealed in a restoration project that Stephan Koja, director of the Old Masters Picture Gallery in Dresden, Germany, described as “a detective story and an adventure.”

The painting is the focus of an exhibition at the gallery, to be opened on Thursday by Chancellor Angela Merkel of Germany and Prime Minister Mark Rutte of the Netherlands, and running through Jan. 2. It is one of just 35 works definitively attributed to Vermeer: The Dresden show, called “Johannes Vermeer: On Reflection,” unites 10 of them alongside works by contemporaries from whom Vermeer learned, including Pieter de Hooch and Gerard ter Borch.

Ever since an X-ray of “Girl Reading a Letter at an Open Window” was made more than 40 years ago, scholars have been aware of the Cupid, who stares out of a painting within the painting. The section, in the upper right of the canvas, was hidden under a rectangle of paint behind the girl’s head. But they had always assumed that Vermeer had erased the god himself.

So when curators at the Dresden State Art Collections, which oversees the Old Masters Picture Gallery, first decided to restore the painting in 2017, there were no plans to expose him. But the rectangle responded differently from the rest of the painting to a solvent that restorers used to remove the varnish, Koja said in an interview.

That suggested the paint contained different components from Vermeer’s, making it more likely that it was applied by another hand. The darker shade also suggested a later artist might have tried to match the original paint after it had darkened with age.

The museum appointed an advisory panel of Vermeer experts and restorers. The group agreed that removing microscopic samples from the painting for testing was justified — a decision, Koja said, not to be taken lightly. Analysis of the tiny fragments gave conclusive evidence that the Cupid was overpainted years — even decades — after Vermeer completed the work in the late 1650s, Koja said.

“We found a layer of varnish with dirt on top of it” that must have accumulated later, Koja added. “It was clear the top layer of paint wasn’t by Vermeer. It was a distortion by a foreign hand against the intention of the artist.”

After the expert panel gave the go-ahead, restorers exposed a strip beneath the painted rectangle, about half an inch wide. Not only was the brushwork on the Cupid unmistakably Vermeer’s, it was also still in excellent condition, Koja said.

“The results of the tests were so overwhelming that it was clear what we had to do,” he said. The panel agreed that Christoph Schölzel, a painting restorer at the Dresden museum, should expose the Cupid in full. Schölzel took a year and a half, working inch by inch with a scalpel and a steady hand under a microscope.

Koja said the painting had gained something, not only in terms of composition and color balance, but also with respect to its content. While the blush on the girl’s cheeks previously made clear that she was reading a love letter, the god of desire on the wall adds a message about the kind of love Vermeer might have meant. His Cupid is shown trampling on a mask, a symbol of deception, to show that love conquers deceit and dishonesty.

The picture-within-a-picture also connects the work to Vermeer’s later interior scenes, many of which portray figures by windows, flooded in light. These often capture a moment in which the subject is lost in thought, alone, sometimes in the middle of a domestic task. Paintings or maps on the walls behind them add to the viewer’s understanding of the characters’ inner life.

The same Cupid appears in three other Vermeer paintings, including “Young Woman Standing at a Virginal,” which is also in the Dresden show and is on loan from the National Gallery in London. But in this work, there is no mask crushed under Cupid’s foot — instead he holds what looks like a letter. In “Girl Interrupted at Her Music,” which the Frick Collection in New York has sent to Europe on loan for the first time for the Dresden show, the Cupid looms over the couple in the foreground, leaving no room for doubt about their thoughts.

It is likely that the Cupid was based on a real painting in Vermeer’s possession. An inventory of his estate, which included about 50 paintings, mentions “a Cupid.” While the painting has not been located or identified, the curators say they believe that it was probably a contemporary work by the Dutch painter Caesar van Everdingen. (Another Cupid painting by that artist is on display in the Dresden exhibition.)

Some mysteries remain. It is not clear exactly who painted over the god — nor why, or when — although we know that other Vermeer paintings were altered by later generations to meet contemporary tastes. The discovery has also prompted speculation about another of his works, “Woman With a Pearl Necklace,” which is in the collection of the Berlin State Museums.

The woman in that painting, dressed in yellow trimmed with ermine, stands in front of a mirror, her fingers on the ribbons at either end of the necklace, in a moment of quiet introspection. Behind her is a stark white wall. Analysis has shown that a map hanging on the wall was painted over — but by whom?

Uta Neidhardt, chief restorer for Dutch painting in the Dresden State Art Collections, said it could have been done by Vermeer himself, but added, “Our colleagues in Berlin are bound to face a lot of questions.”

Koja said that the Dresden team would be happy to assist if curators in Berlin decided to investigate more closely. But Katja Kleinert, the official responsible for 17th-century Dutch and Flemish painting at the Berlin State Museums, said that analysis conducted less than two decades ago showed that the map — unlike the Dresden Cupid — was never painted to completion.

“It was only sketched,” she said. “We are pretty sure our wall was painted by Vermeer.”

Johannes Vermeer: On Reflection
Through Jan. 2, 2022, at the Old Masters Picture Gallery, in Dresden, Germany; gemaeldegalerie.skd.museum.