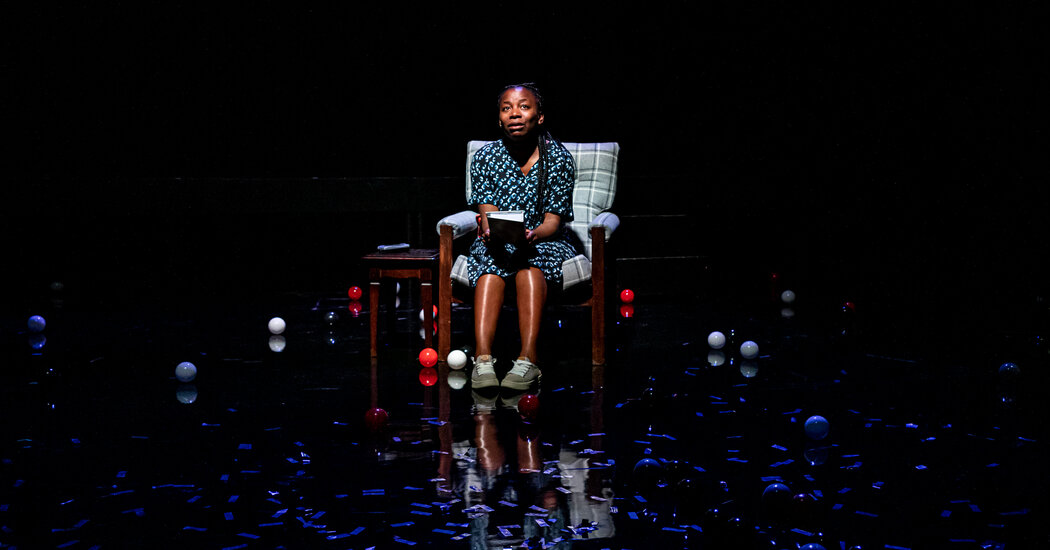 EDINBURGH — Quiet isn’t a word usually associated with August in Edinburgh, where the International Festival and the bigger, more ragtag Fringe usually promise a cultural hurly-burly. But the pandemic here, as elsewhere, has readjusted realities, as was evident from the moment I arrived last week, primed for a whirlwind weekend of playgoing.

Gone were the theatrical hopefuls eagerly buttonholing visitors, and, with them, the barrage of fliers that can quickly weigh down a knapsack. This year, there are hundreds of shows, as opposed to thousands, and many of them are online. It was as if the Scottish capital were taking its cue from the title of a show I saw here: “Still.”

That play, by Frances Poet, running at the Traverse Theater as part of the Fringe, is an intriguing study of five people whose lives are threaded together by desperation, among whom Mercy Ojelade stands out as an expectant mother confronting unbearable grief. Directed by Gareth Nicholls, who runs the Traverse, it offers up a fractured landscape of Edinburgh residents bound together by pain, even as the mood around town was one of readjusting to life after lockdown: The majority of coronavirus restrictions were lifted in Scotland on Aug. 9, three weeks later than in England.

This means that restaurants and bars were open at capacity, while theaters are still adhering to the social distancing protocols that were in place when shows were planned and tickets sold. More than once, I found myself surrounded by rows of empty seats: “Still,” for instance, can play to 67 people per performance in the Traverse Theater’s largest auditorium, which usually holds more than 200.

A collaboration between Ireland’s Landmark Productions and the Galway International Festival, “Medicine” springs from the adventurous, absurdist mind of Enda Walsh, the Dublin writer whose breakthrough play “Disco Pigs” exploded on to the Edinburgh Fringe in 1997: Walsh later wrote such musicals as the David Bowie-scored “Lazarus” and “Once,” winning a Tony Award in 2012 for the latter.

The appearance early in “Medicine” of a woman dressed as a lobster (don’t ask) tips the show toward an anything-goes therapy session that unfolds in an unnamed psychiatric facility.

The lead character is the pajama-wearing John (Domhnall Gleeson, the “Star Wars” and “Harry Potter” alumnus in splendid form), who is made to relive past traumas as part of a dubious psychological reckoning that leaves this beleaguered figure looking even more anxious. Any healing, you feel, hasn’t quite gone to plan, and you begin to think his therapists, both named Mary, might just as well be there to torture him. Walsh doubles as his own director, balancing the play’s anarchic energy with its prevailing sadness.

This year, those wary of plays indoors can take comfort in any number of outdoor shows — a brave proposition in a city known for its unpredictable weather. (I experienced mostly clear skies, which is by no means the Edinburgh norm.)

At “Aye, Elvis,” Morna Young’s sweetly sentimental play about a female Elvis impersonator (a game Joyce Falconer) who wants to take her tribute act all the way to Graceland, spectators sit in self-contained pods in a parking lot behind the Traverse, with Edinburgh Castle looming high above. But our attention was justly riveted on Falconer’s obsessive Scotswoman, Joan, and her scold of a mum (Carol Ann Crawford, whose every expletive is brilliantly timed).

The following afternoon, I sat on a cushioned tree stump in a woodland as one of 35 spectators for the Grid Iron theater company’s hugely enjoyable “Doppler.” Directed and adapted by Ben Harrison, from a novel by the Norwegian writer Erlend Loe, the play tells of an unrepentant misanthrope (an impassioned Keith Fleming) who forsakes his family to live in a tent, surviving on elk meat and soaking in his own bile.

Yet isolation turns out to be elusive, as the play’s title character is visited by a stream of family members. His irascibility is leavened by deadpan humor (“Man cannot live by elk alone”) that varies the tone, even as the lush setting exerts an allure of its own.

Back in town, and indoors, a Methodist church is the unexpected venue for an eco-friendly half-hour musical, “WeCameToDance,” a brainchild of the Food Tank initiative in Baltimore that is billed as an “interactive, interplanetary musical adventure.”

What does that mean, you might well ask? Think of it as a dance class led by six kindly, athletic women who argue for a better, more environmentally aware planet, all the while leading an intensive aerobics workout. Deliberately difficult to classify, the show, co-directed and choreographed by Ashley Jack, offers a family-friendly mixture of consciousness-raising and fitness training, imparting an urgent political message while working the pulse.

Performed three times daily to carefully distanced audiences of 50, whose members remain on their feet throughout, the show feels like a blueprint for something more ambitious to come and has been invited to participate in the United Nations Climate Change Conference in neighboring Glasgow in November.

Not much was charitably intended over at “Dead Funny,” the raucous solo performance from the drag artist Myra DuBois that I saw in Edinburgh as part of a British tour that will include a stand at London’s Garrick Theatre on Sept. 6. Staged in a tent, the hourlong show places Myra firmly in the take-no-prisoners tradition of Barry Humphries’s formidable alter ego, Dame Edna Everage: Latecomers are lampooned and Myra saves what praise she has for herself — “My pronouns,” she says exultantly, “are me, me, me.”

Watching this last in a sequence of shows that made a virtue of distance, I had to feel for those ensnared by Myra’s predatory eye, as she scanned the audience for prey. But even she found room for a closing thank-you to her public for embracing her act in these uncertain times. Myra’s strangulated cackle gave way to to expressions of generosity (“be kind,” she unexpectedly urged those same playgoers whom she had been so quick to chide), alongside an acknowledgment of the strength in numbers — however depleted — without which live performance cannot survive.