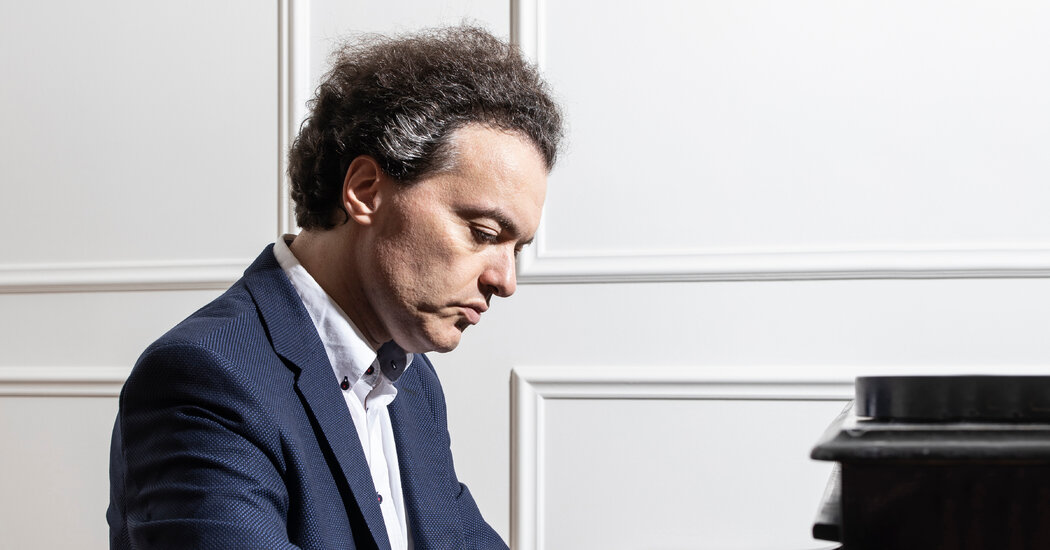 For the pianist Evgeny Kissin, it was a love story that provided the inspiration to write his own music again. After being reunited with a childhood friend — now his wife — he woke up in the middle of the night and jotted down a “Meditation” that would become the first of his Four Piano Pieces Op. 1.

Mr. Kissin is best known as a soloist who began his career as a child prodigy. By age 12 he had performed both Chopin concertos in his native Russia and by 19 he had made headlines with the Berlin Philharmonic and the New York Philharmonic.

He remains one of today’s most highly regarded pianists for the intensity and sensitivity of his interpretations. He also began writing music as a child, as soon as he had learned notation, but stopped at about age 14, not resuming until just shy of a decade ago.

As he approaches his 50th birthday in October, Mr. Kissin maintains an insatiable intellectual curiosity. His solo recital Saturday at the Salzburg Festival features works by Chopin, Gershwin, Alban Berg and Tichon N. Chrennikow (as a child, Mr. Kissin performed works, including ones he had written himself, for this Russian composer).

The fall brings a busy concert schedule, in cities as varied as Jerusalem, Seoul and Kaohsiung, Taiwan. At the same time, he is steadily growing his catalog, most recently with “Thanatopsis,” a setting of the William Cullen Bryant poem, for female voice and piano.

“The very fact that I started composing again came to me as a surprise,” he admitted in a video call earlier this month from his home in Prague, citing a “hidden potential” that was awakened by his romance with that childhood friend, Karina Arzumanova, whom he married in 2017.

In his 2017 autobiography “Memoirs and Reflections,” Mr. Kissin wrote that music “stopped sounding in my head” as his concert career gained momentum. Since 2012, ideas have been flowing back, and he continues in a noncompetitive manner: “Let us see what comes of it,” he wrote, “and how audiences will respond to my music.”

The works that have been published so far reveal the sharp intellect and natural artistry that also characterize his performances. The last of the Four Piano Pieces, the Toccata, revolves around a jazzy, Gershwin-like motif, at first distorted by harsh dissonance, while running across the keyboard with virtuosic arpeggiated textures.

His one-movement cello sonata, meanwhile, is lyrical and introspective, with a theme that sounds as if it is based on a 12-tone system but in fact is derived from only eight notes.

Mr. Kissin has received the support of Arvo Part, one of the most widely performed contemporary composers, and leading musicians. His String Quartet was recorded by the Kopelman Quartet in 2016, and the cello piece has been championed by the international soloists Steven Isserlis, David Geringas and Renaud Capuçon.

In a phone interview from London, Mr. Isserlis noted the range of styles that Mr. Kissin has managed to express in only a handful of works. “He’s such an intense person, and musician,” he said. “He has a very serious view of the world, although he’s not without humor.”

Mr. Isserlis placed the “extreme emotions” of Mr. Kissin’s music in a line of pianist-composers ranging from Schuman to Rachmaninoff but also noted a specifically Russian-Jewish tradition. “There’s a darkness,” he said. “But there’s also a love of beauty. It has its roots in the past, like all good music.”

Mr. Kissin, who in 2013 became an Israeli citizen, qualified any strict categorization by saying that he identifies with “a small minority of the Russian population, namely, the liberal Russian intelligentsia — a significant part of which consists of Jews like me.”

For many years he has recited Yiddish poetry onstage and is himself a poet and writer, with work published in the Yiddish edition of The Forward and in a 2019 book, “A Yiddisher Sheygets.”

The pianist is passionate about raising awareness toward the historic and aesthetic value of Yiddish, a Germanic language spoken by Ashkenazi Jews since the ninth century.

Yiddish, Mr. Kissin writes in his memoir, belongs “to the highest achievements of world culture.” He notes its “rich and expressive” quality and an “inner strength” that “is capable of conveying the subtlest thoughts and feelings.”

He and the writer and editor Boris Sandler joined forces for the Yiddish-language musical “The Bird Alef From the Old Gramophone,” which was performed two years ago in Birobidzhan, the center of the Jewish Autonomous Region in Eastern Russia. Although Jews account for less than 2 percent of the region’s population, Yiddish is still the official language.

The musical’s creators hope to have it staged in Moscow next summer to mark the 70th anniversary of the Night of the Murdered Poets, when 13 Jewish intellectuals — including Yiddish poets — were executed by firing squads under orders from Stalin.

Mr. Kissin is also working on a vocal cycle for baritone and piano based on the work of the Russian poet Alexander Blok. Ideas for the work emerged as early as 1986, he said, but he began writing down the music only in recent years.

Mr. Kissin again emphasized that “it’s a matter of inspiration. And of course also of time. I only compose sporadically because it requires blocks of concentration,” he said, “which my main occupation as concert pianist allows very seldom.”

Asked what repertoire he would like to explore in coming years, he rattled off a list of solo and chamber work with encyclopedic precision: the solo works of Bach and Shostakovich, which he has never played in public; Brahms’s Third Violin Sonata, one of his “favorite pieces of music ever written,” which he has played only once; Haydn, Mozart, Ravel, Scriabin.

But he will also return to Rachmaninoff’s Third Piano Concerto, which he has not played since 1996, to commemorate the 150th anniversary of the composer’s birth in 2023. Also that year, he plans to take on the Piano Concerto of Rimsky-Korsakov.

Despite his renewed activities as a composer, Mr. Kissin remains humble: “I would never dare to compose myself knowing that I would never be able to write something approaching the level of the great music already written.

“Playing music,” he continued, “is how I can express myself best.”