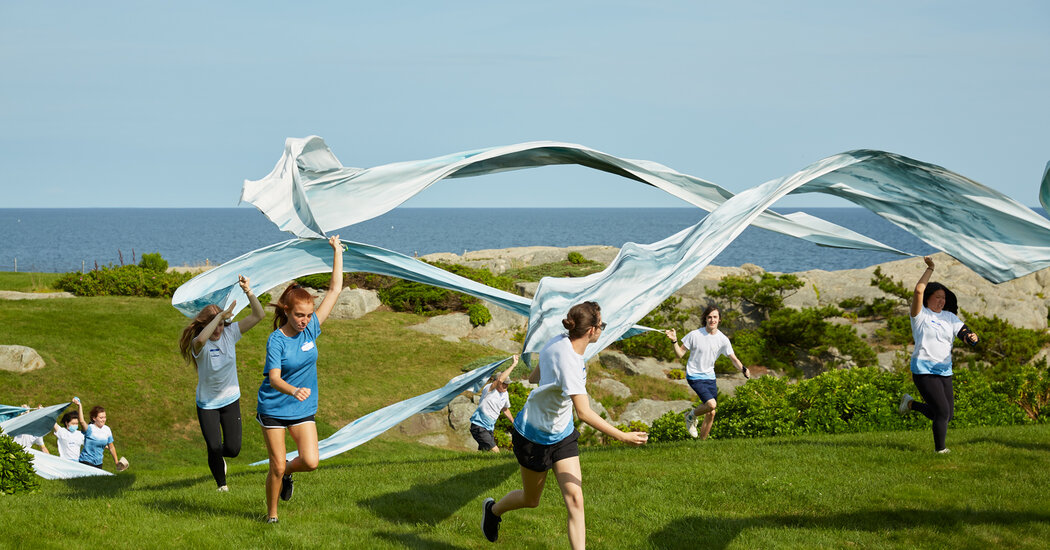 For the first two weeks of August, Melissa McGill’s studio was beneath a white canopy tent pitched on the undulating backyard lawn of Rough Point, one of the impossibly large Gilded Age homes facing Newport, R.I.’s Bellevue Avenue on one side and the Atlantic on the other. Working mornings and afternoons, the artist made 50 acrylic paintings of the ocean, attempting to capture its look and mood in real time. The works, some of which are layered with cheerful streaks of blue and white while others feature diluted grays, are all dated, and together make up a kind of diary of the sea. Perhaps this all sounds a little old-fashioned — after all, the Atlantic has been popular with en plein-air painters since at least the late 19th century — but in fact, McGill’s works, which were done on sheets of recycled ocean plastic ranging from 25 to 45 feet in length, are part of a deeply contemporary project: a collaborative performance piece, one meant to raise awareness about rising sea levels, called “In the Waves.”

McGill is 52, the daughter of a navy officer and was born not so far away in Quonset Point. “I was never on the beach, I was in the water,” she said of childhood outings to the shore. She now lives in Beacon, N.Y., and has made the elements, and water, in particular, a focus of her practice. For “Constellation” (2015-2017), she installed a series of light poles on Pollepel Island in the Hudson River; at night, their glowing glass orbs seemed to hang in the sky like stars. In 2019, in conjunction with that year’s Venice Biennale, she unveiled “Red Regatta,” for which she worked with Venetian sailors to equip a fleet of vela al terzo boats with sails painted 52 shades of red, then led the vessels in dancelike sequences through the lagoon. It was a tribute to one aspect of the city’s culture and a reminder of the factors, climate change among them, that stand to diminish, or fully destroy, its future.

“So much public art gets swallowed up by the environment, but that work held the space and respected it,” said Dodie Kazanjian, the curator of “In the Waves,” which is being put on by Art & Newport with the Newport Restoration Foundation’s (N.R.F.) Keeping History Above Water initiative. Kazanjian founded the former organization in 2017, and the philanthropist Doris Duke founded the N.R.F. in 1968, to save the city’s colonial-era houses from being torn down to allow for wider streets. Today, sea level rise is a direct and increasingly grave threat to those same homes, and to much else. “This is something the community will have to deal with — it’s coming,” said Edith McBean, a board member of both Art & Newport and N.R.F. She was speaking just a week after the release of a United Nations climate report stating that, thanks to human recklessness, the world’s glaciers will go on melting and the sort of floods that have devastated parts of Europe, China and the United States this summer will only become more frequent. Harrowing as this is, McGill cautions against viewing climate change through the lens of man versus nature — “we are stewards for Mother Earth,” she writes in a statement accompanying “In the Waves” that acknowledges the ancestral lands of the Niantic Narragansett nation on which it’s taking place — and seeks to raise awareness in a way that doesn’t scold, but that invites people in.

Her and Kazanjian’s vision for this latest work was to have community members, including those from several youth groups (FabNewport, the MLK Community Center), act as (paid) performers, moving with the painted waves, and with one another. And so the team, which also includes Davalois Fearon of Davalois Fearon Dance as choreographer and the jazz dance artist Melanie George as dramaturge, put out an open call, and ended up with an eclectic troupe of 36. Danielle O’Loughlin and Josephine Moore, both juniors at Mt. Hope High School in nearby Bristol, signed on because they wanted to put their dance skills to use. Denzel Amoah, 24, a graduate student of landscape architecture at RISD, was intrigued by the setting. “I like the juxtaposition between the earth — this hard, stagnant surface — and the fluidity of the waves,” he said. And Richard St. Aubin, 76, a photographer and retired long-distance sailor, was impressed by McGill’s other work, which reminded him of the large-scale installations of Christo and Jeanne-Claude.

Over three days of rehearsal, Fearon helped the participants grow accustomed to the feeling of holding a wave painting, with one person on either end of each work, and introduced a few choreographic motifs, directing them, by turns, to stand in a straight or staggered line, or to fan out in the shape of a propeller. It was difficult for the partners to hear each other over the sound of the plastic catching and crackling in the wind, which was not unlike that of the actual waves just beyond, so they learned to communicate through eye contact and body language. Maneuvering an already-billowing wave, said McGill, is like having “a conversation with the wind.” It is also, as Darien Matta, 16, one of the performers, put it, “a good workout.”

The wind, of course, like the ocean, morphs from one moment to the next. Thus, while the show always begins with the ensemble walking in a procession over a hill and into view with their wave paintings in tow, no two performances are exactly alike, something the team figured they might as well embrace. “Rather than trying to have everyone move synchronously, we opted for an improvisational score,” said George. That created a basic structure while leaving room for the weather, as well as for different personalities and ability levels. “There’s this vacillation between the individual and the group,” George added. Indeed, a viewer’s eye travels constantly, taking in small pockets of beauty — the way a performer holds her arm aloft, say, or how the light catches a particular brush stroke — and then the whole expanse, which serves as a reminder of humans’ interconnectedness and the fact that information and a will to effect change can travel, too. “With this project,” said Kazanjian, “it’s almost as if the painted image becomes painted words used to tell the story — because we know that, even after the performance is over, it will live on in the telling.”