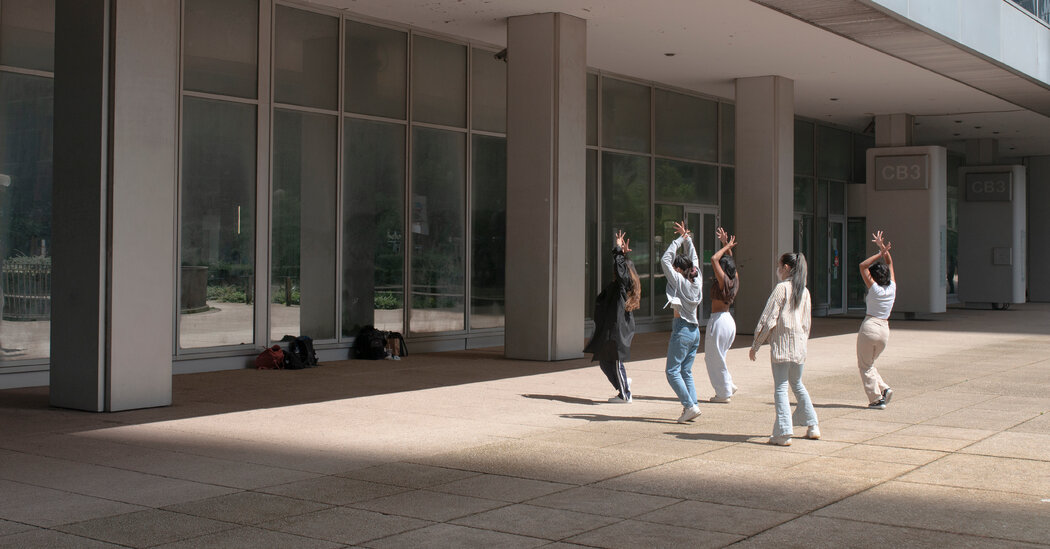 PARIS — On a recent Saturday morning, Carla Kang, Audrey Kouamelan and Emma Letouche assembled in front of a squat glass building called CB3. It stands about 250 yards from the Grande Arche, the architectural marvel that is the signature structure of La Défense, a district of soaring office towers northwest of Paris.

Then the three women, aged 21 to 23, began spinning, jumping and swooping as they danced to “Fire Truck,” a song from NCT 127, a South Korean K-pop group. They stopped and started, often laughing, and paused from time to time to look at NCT’s original music video on their phones as they tried to duplicate the intricate dance steps.

They were rehearsing to make their own video in the coming weeks — a re-enactment of the NCT 127 original — that they will upload to a K-pop channel they run called Young Nation. Their top video, based on “Next Level” by the four-women K-pop group aespa, has more than 250,000 views.

As on every weekend, the three women of Young Nation were hardly alone.

Throughout the day, about 100 other dancers arrived at CB3 to practice their own routines. In the last few years, the pedestrian plaza around CB3 has become a mecca for dancers from all over Ile-de-France, the region that encompasses Paris and its surrounding suburbs, known as banlieues. Even on weekdays, even in the dead of winter, dancers are out at CB3, from early morning to well into the evening.

Most of the dancers are female, range in age from the mid-teens to late 20s and live in the banlieues. They are almost all part of K-pop fan groups that record song covers and dance re-enactments to post on YouTube channels. The videos, which are shot at locations around Paris — including at Trocadéro, the plaza overlooking the Eiffel Tower; in front of the Pantheon; and, of course, at La Défense — are labors of love because the groups cannot collect money from advertising: The songs, and even most of the dance moves, are copyrighted by K-pop artists.

K-pop has an urban appeal that crosses cultural and geographic borders. Scrolling through YouTube, it’s possible to find similar K-pop cover dance groups in Russia, Poland, Italy, Bulgaria, the United States and dozens of other countries.

Recent French tours by the most popular K-pop band, BTS, have sold out in minutes; in 2019, all the tickets for the 200,000-seat Stade de France arena went in two hours. Paris now has a K-pop Dance Academy where people can take classes, a couple of K-pop themed stores (Boutique Musica and Tai You), and a Korean K-pop restaurant called Kick Café.

Kouamelan, 23, said she had to commute about an hour to get to CB3 from her home in Drancy, near Charles de Gaulle Airport on the eastern side of Paris. She said she likes practicing at CB3 because “there is so much space and we can move around freely.”

The glass building has other amenities that make it attractive. It is vacant, and has been for five years, so there is no one for the dancers to disturb while they play their music, and vice versa.

The building’s ground floor is recessed on all four sides so that there is a large protected area under the higher floors when it rains. It is also surrounded by plate glass windows: perfect mirrors, just as in a professional dance studio.

The cost of using the space — nothing — is a huge draw, as many of the dancers are either students or work low-paying jobs. Professional studio time is not necessarily something their personal budgets can afford.

La Défense is also a major transportation hub: The subway, trains, trams and buses all stop or end at the Grande Arche. That last factor is particularly important, as many of the dancers travel long distances to get to CB3.

On this particular Saturday, members of the dance crew Stormy Shot had come to work on their latest project: a tribute video for the fifth anniversary of the founding of Blackpink, a female group which may be the second-most popular K-pop group.

Lucie Zellner, 23 — who organizes Stormy Shot, along with her sister, Elea, 21 — said that the group often practices between 9 and 17 hours per week. Stormy Shot has about 30 members, Zellner said, though not everyone appears in each video, and, not surprisingly, there is attrition. She added that the group had let a member go the previous week. Stormy Shot rehearsed for hours, pausing to eat lunch under the canopy of CB3 as the skies intermittently opened up. Eventually, a hand-held camera came out and one of the group’s members, Lahna Debiche, 17, filmed the others as they rehearsed.

Later that afternoon, about 10 members of the Cloud Dance Crew showed up for a final rehearsal before a later performance of songs and dances by Blackpink. Dressed mostly in black and pink themselves, the group was led by Clyde Williams, 27, who is nearly six foot five and describes himself as a “fairy from outer space” on Instagram. As the group rehearsed, Williams, whose large frame is surprisingly supple, made small corrections and gave instructions to the other dancers.

Nothing is forever, and CB3 may not be available to the dancers for much longer. A spokeswoman for the building’s owner, A.E.W., said in an email that the company could not comment about CB3’s status until later this year. But there is a work order posted on the building and, according to the website of the design and engineering company Gesys Ingénierie, it has been hired to renovate CB3 by adding five stories and some trees out front.

If CB3 does end up being renovated and occupied, the dancers may have to find another spot. Though it could be difficult to find one that checks all the boxes in the same way as CB3.