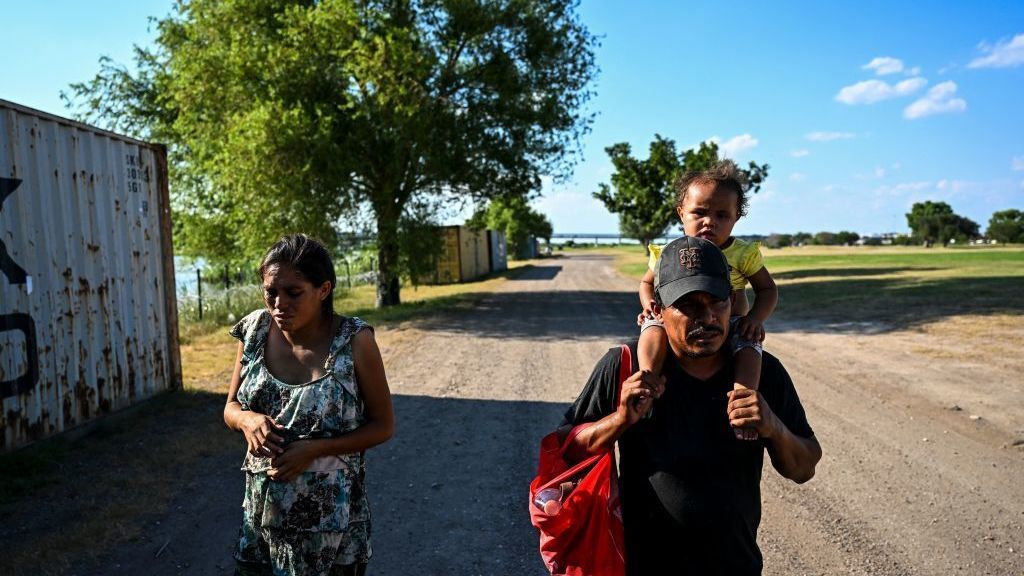 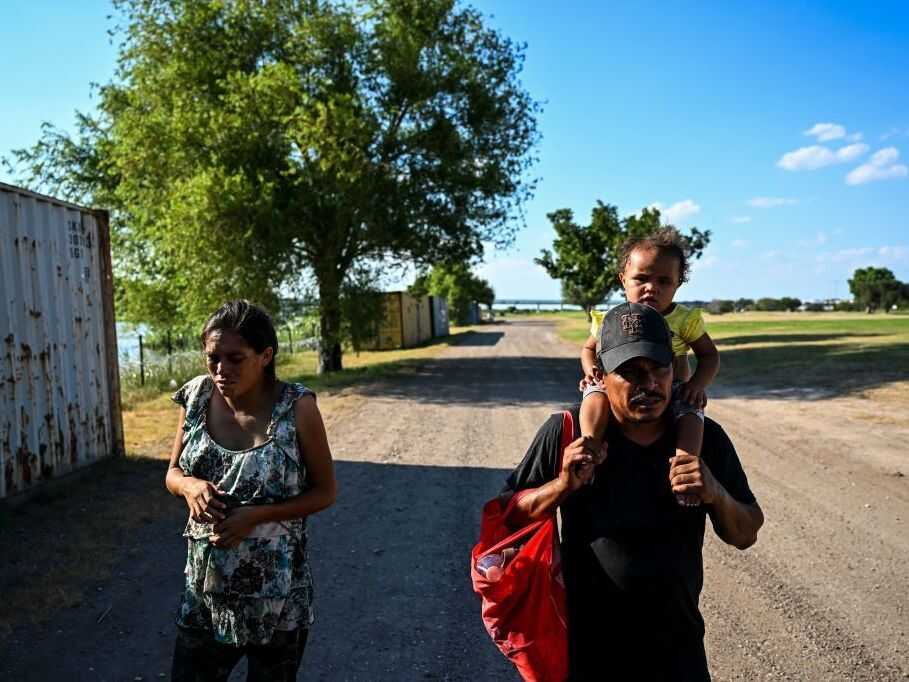 A migrant family is apprehended by U.S. Border Patrol agents and National Guard troops in Eagle Pass, Texas, near the border with Mexico on June 30, 2022. 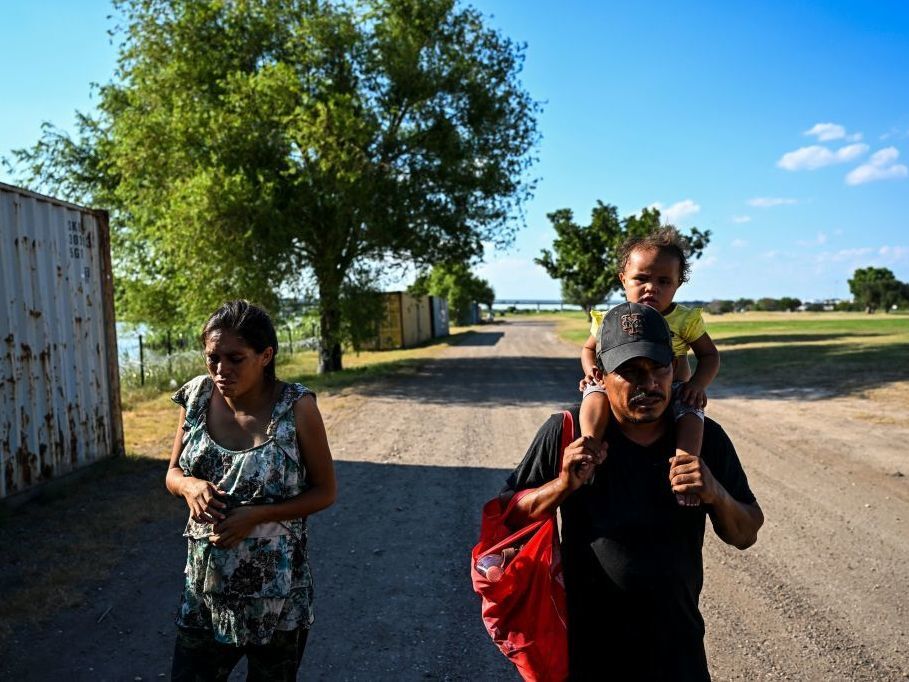 A migrant family is apprehended by U.S. Border Patrol agents and National Guard troops in Eagle Pass, Texas, near the border with Mexico on June 30, 2022.

More than half of Americans say there’s an “invasion” at the southern border, according to a new NPR/Ipsos poll, part of a broader decline in support for immigrants overall.

The poll also found that large numbers of Americans hold a variety of misconceptions about immigrants — greatly exaggerating their role in smuggling illegal drugs into the U.S., and how likely they are to use public benefits, for example — as false and misleading claims about immigration gain traction.

Republicans are more likely to hold negative views of immigrants. But the poll found they’re not alone in embracing increasingly extreme rhetoric around immigration.

“Invasion” rhetoric is resonating with many Americans

The poll found that a majority of Americans — including three-quarters of Republicans — say it’s either somewhat or completely true that the United States is “experiencing an invasion” at the southern border.

The U.S. Border Patrol has apprehended migrants at the U.S.-Mexico border more than 1.8 million times since October, setting an annual record for arrests with two months still to go before the fiscal year ends.

Nearly half of those migrants were quickly expelled under the public health order known as Title 42 that’s been in place since the beginning of the pandemic. But hundreds of thousands more were allowed to seek asylum and other protections in the United States.

Republican leaders are increasingly framing the situation as an “invasion.” Immigrant advocates say the word has a long history in white nationalist circles, and warn that such extreme rhetoric could provoke more violence against immigrants.

Still, the polling shows that the word “invasion” has been embraced by a wide range of Americans to describe what’s happening at the border.

“We are not actually screening enough people to make it safe for the rest of the country,” said poll respondent Michael Cisternino, a Republican from Nevada, in a follow-up interview.

Republicans were also more likely to endorse rhetoric that echoes the so-called “replacement theory” — the false conspiracy theory that Jews or elites are deliberately replacing white Americans with immigrants and people of color.

More than a third of all poll respondents agree that “native-born Americans are being systematically replaced by immigrants” — including more than half of Republicans. Almost half of all Americans say that “Democrats are working to open our borders to more immigrants,” with more than 70% of Republicans in agreement.

The issue of immigration is much more urgent for Republicans than for Democrats. About a quarter of GOP respondents say immigration is one of the “most worrying” problems facing the country, while only 4% of Democrats rank immigration as a top concern.

Sharma’s parents emigrated from India to Canada, where he was born, and later moved to the United States. Sharma thinks it’s becoming increasingly acceptable to blame immigrants and other people who look different for the country’s problems.

“There is this xenophobic kind of talk that’s being thrown around,” he said. “So I’m not surprised by that.”

Misleading claims about immigrants are gaining traction, particularly around fentanyl

The poll found that a large number of Americans, including big majorities of Republicans, blame migrants for a rise in deaths from fentanyl — even though there’s no evidence directly linking them to the problem.

It’s true that fentanyl overdose deaths are up in recent years, and that much of the U.S. fentanyl supply is smuggled through the border.

But experts say the vast majority of fentanyl and other illegal drugs are smuggled through official ports of entry, hidden in large trucks and passenger vehicles, while a relatively small amount is smuggled by cartels across the border between those ports.

Virtually none is smuggled by migrants themselves, says Victor Manjarrez, Jr., a former Border Patrol sector chief who’s now a professor at the University of Texas at El Paso.

“The probability that they’re going to carry some kind of illicit narcotic is probably close to zero,” Manjarrez said. “The vast majority of that fentanyl is going through a port of entry.”

Still, six out of 10 of Republicans in the poll said incorrectly that “most” of the fentanyl entering the United States is smuggled by migrants.

“These statements of false or misleading or incomplete information are definitely gaining more traction among Republicans,” said Mallory Newall, a vice president at Ipsos, which conducted the poll.

But partisanship isn’t the only factor.

“What we’re seeing here in our polling is that your willingness to believe these misleading or incomplete statements around immigration not only depends on your partisan affiliation, but also where you are getting your news from,” Newall said.

That finding was especially strong when it comes to so-called “ghost flights.” Republicans accuse the Biden administration of organizing secret flights carrying migrants from the border to communities across the country. But immigrants advocates point out that such flights aren’t secret or new, and accuse Republican critics of fear-mongering for political gain.

The poll asked if the United States is “secretly flying unaccompanied migrant children across the country at night.” Among Republicans whose main news source is Fox or conservative media, about eight in 10 called that statement true, Newall said. However Republicans who get their news elsewhere weren’t so sure; only four in 10 answered true.

Falling support for immigration, and an uptick in approval for a border wall

When NPR polled Americans on immigration in 2018, three out of four respondents agreed that “immigrants are an important part of our American identity.”

Today that number has fallen sharply.

That’s not the only sign of eroding support for immigrants in the latest poll.

When asked four years ago, nearly two-thirds of respondents favored a pathway to legal status for the so-called Dreamers, undocumented immigrants who were brought to the country as children. Now that support has fallen to a bare majority, driven largely by a steep drop among Republicans and independents.

There’s also been a modest but steady increase in support for a wall at the southern border, from 38% in favor four years ago up to 46% now.

It’s not clear why those numbers have shifted. Mallory Newall at Ipsos suspects the explanation is tied to broader concerns about inflation and the economy.

“One thing that we know is that during times of bad economic conditions, for example, the recession in 2009, support for immigration declines,” she said.

There’s also a theory that support for immigrants tends to fall when there is a perception of chaos at the southern border. And the spread of false and misleading claims could be a factor, as well.

The reach of false and misleading claims may be growing

The poll suggests that the reach of some false and misleading claims may be growing.

Four years ago, NPR asked if “immigrants are more likely to commit crimes or be incarcerated than the U.S.-born population.” Back then, more than 60% of respondents correctly identified that statement as false. But when asked again this year, only 49% got it right.

That wasn’t the only question where Americans’ grasp of immigration seemingly declined during the past four years.

In 2018, six out of 10 respondents correctly said that most undocumented immigrants in the United States have been in the country for more than a decade. This time, 43% answered correctly; almost as many said they didn’t know.

“There has historically been a lot of framing issues regarding immigration that have sometimes distorted facts intentionally,” said Sophia Jordán Wallace, a professor of political science at the University of Washington who has studied false and misleading claims about immigration.

Wallace says there’s a long tradition in American politics of blaming immigrants for real problems the country is facing as a way to mobilize voters — regardless of whether there’s any connection between those immigrants and the problems they’re accused of causing.

Those misleading or false claims don’t always cross over to the mainstream. But sometimes, Wallace says, they do.

“Once it gets out there, it’s hard to correct,” she said.

The NPR/Ipsos poll was conducted from July 28-29, 2022, with a sample of 1,116 adults online. The poll has a margin of error of plus or minus 3.6 percentage points for all respondents.