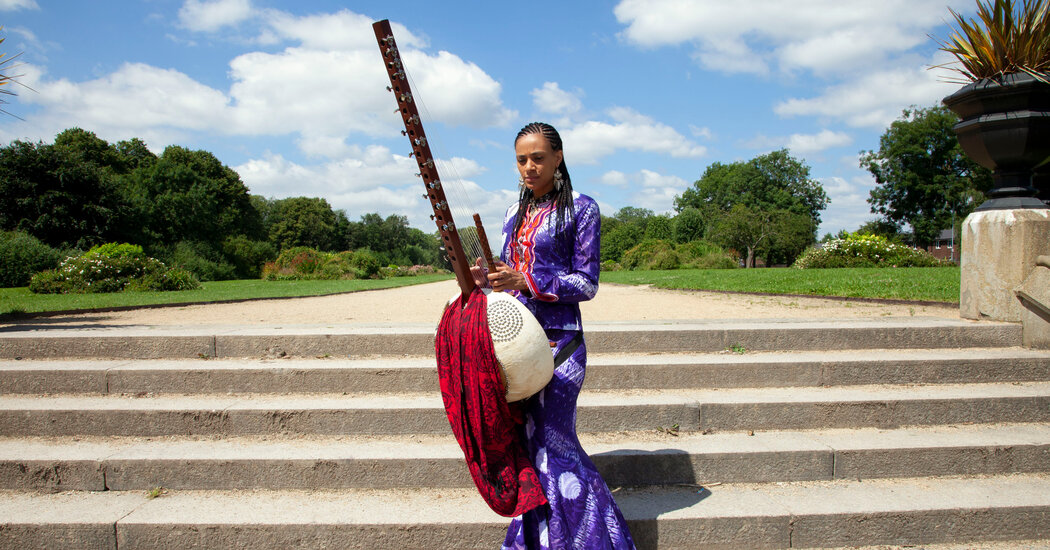 MANCHESTER, England — The ethereal sound of the kora, a centuries-old West African instrument, reverberated as Sona Jobarteh, a virtuoso from one of Gambia’s most celebrated musical families, plucked its strings with her forefingers and thumbs.

Under purple stage lights at the Manchester International Festival in July — her first performance since the pandemic began — Ms. Jobarteh added her velvet voice to the crisp sound of the kora, a 21-string instrument that combines the qualities of a lute and a harp. She sings in Mandinka, a language spoken by one of Gambia’s many ethnic groups, and the words descended like rainfall on the audience in northern England.

Like her father and relatives stretching back generations, Ms. Jobarteh is a griot — a musician or poet whose tradition is preserved through the family bloodline. And in West Africa the griot fills a far broader role: not just as a kora master, but also as a historian, genealogist, mediator, teacher and guardian of cultural history.

“The griot is someone who is a pillar of society, who people go to for guidance, for advice, for wisdom,” said Ms. Jobarteh, who is 37.

Until Ms. Jobarteh, kora masters had one other notable characteristic: They were always male. By tradition, the playing of the kora is passed from father to son, but for many years Ms. Jobarteh was her father’s only child. “Whatever I do, it’s always in the awkward box,” she said, laughing.

She initially shunned the label of first female kora master, preferring to be appreciated for her abilities rather than her gender. “I hated it with a passion,” she said. “I felt like no one would listen to what I was playing, that all they would do is observe what I am.”

But she has come to embrace that status, in part because her achievements have inspired young female students. “It’s much bigger than just being about me,” she said. “It’s about instilling that seed of inspiration in girls.”

The kora was also what brought her parents together.

In 1982, a year before Ms. Jobarteh was born, her mother, Galina Chester, who is English and who had never left Britain, flew to Senegal. She was traveling with Ms. Jobarteh’s half brother, Tunde Jegede, a British-Nigerian who is now a multi-instrumentalist and composer, to connect him with his African heritage.

Toting a piece of paper scrawled with the name of a kora master, Ms. Chester drove across the desert to Gambia, where there was no airport at the time, to the house of Amadu Bansang Jobarteh, whose influence was so broad that he served as an adviser to Gambia’s first president.

There, she met the kora master’s son and primary student, Sanjally — who would go on to become Ms. Jobarteh’s father. “That’s how she met my father, and how my story began,” Ms. Jobarteh said.

Ms. Jobarteh’s childhood straddled two worlds: Britain, where she was born, and Kembujeh, her grandfather’s village in Gambia, where, enveloped by the warmth of her extended family, she found her “cultural grounding.”

Griot women are typically taught to sing, but her grandmother Kumunaa encouraged her to sit with her grandfather and listen to the kora.

A few years ago, Ms. Jobarteh’s mother shared letters with her daughter in which Kumunaa had predicted that the girl would become a griot and pleaded that her lineage be nurtured.

“I just wish she was alive for me to ask her what was in her mind,” Ms. Jobarteh said. “She knew I was a girl. She knew it was not acceptable.”

Ms. Jobarteh’s first kora teacher was Mr. Jegede, her half brother, whom she began playing the instrument with at age 3. (Although Mr. Jegede is a virtuoso in his own right, he is not a griot, coming from outside the Jobarteh bloodline.)

She later became determined to carve out a path in classical music. At 14, she took composition lessons at the Purcell School for Young Musicians, outside London. Yet her initial instrument remained in her periphery: The school library displayed a kora that Tunde had donated as a student there. Drawn to it, she tuned and played it, and the school eventually gave it to her.

A year later, she enrolled in the Royal College of Music, where she learned the cello, harpsichord and piano. But her personal musical legacy wasn’t welcome. One instructor dismissed the kora as an “ethnic thing,” she said, and another said of the instrument, “If you want to succeed, this is not a part of it.”

Three years into her education there, Ms. Jobarteh deliberately failed her annual assessment in piano and cello. “I was shaking,” she said. “It felt so wrong, but I just knew, ‘I can’t do this to myself anymore.’”

The college did not immediately respond to requests for comment.

Ms. Jobarteh instead asked her father to officially teach her to play the kora, and went on to train with him for several years. He told her, “I have a duty to give you what is mine,” she recalled.

Some families say the instrument dates to the establishment of the griot tradition in the 13th-century Mandinka empire. The first written account of the kora, by the Scottish explorer Mungo Park, appeared in 1797, according to Lucy Durán, a professor of music at the University of London’s School of Oriental and African Studies. Its popular origin story, Ms. Jobarteh said, is that it was stolen from a jinn, a supernatural being mentioned in Islam.

The Mandinkas and griots attracted widespread interest after the writer Alex Haley traced his ancestry to a Gambian village in the Pulitzer Prize-winning book “Roots.” But their ancient melodies had made their way across the Atlantic centuries earlier, aboard ships carrying enslaved Africans, and morphed into the early American blues.

The kora, with its improvised, oral tradition, can take decades to master. “You learn with your ears, not with your hands,” Ms. Jobarteh said.

For years, she was reluctant to perform in Gambia, where a professional female kora virtuoso had never been seen onstage. But her stage debut with her family, in 2011, was met with adulation.

The release of her debut album that year was also a leap of faith, as Ms. Jobarteh sang in Mandinka rather than in English, which could garner more commercial success. “I thought, ‘This is it. I’ve just put my life down the plug hole,’” she recalled.

The album propelled Ms. Jobarteh’s music around the world, from the United States to New Zealand. And that brought her something far more meaningful than royalties.

“It makes Africans feel something, to see that someone is being respected to sing in their own language, dress in their own clothes, play their own music,” she said. “That is a message not just for Gambians — it’s for the whole African continent.”

Although preserving her heritage is Ms. Jobarteh’s passion, she says her real purpose is educational reform in Gambia — a broader mission that aligns with her role of griot.

In 2015, she opened The Gambia Academy in Kartong, a coastal town, in part to prevent a brain-drain of young people seeking better prospects abroad. “I don’t want the next generation to have to do that,” she said, “where you have to have the privilege of having European connections or titles to be able to succeed in your own society.”

With a curriculum that centers on West African traditions, the school now has 32 students, including her 14-year-old son, Sidiki, and 9-year-old daughter, Saadio. That has helped her pass down her family tradition, too, and onstage in Manchester Sidiki played the xylophone-like balafon and Saadio percussion.

They are learning the griot repertoire — not from their father, but from their mother, a guardian of seven centuries of tradition.